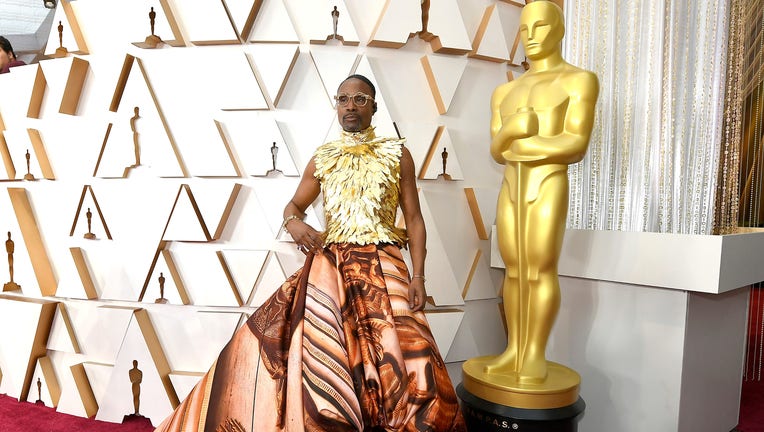 LOS ANGELES - Billy Porter made a golden statement at the 2020 Oscars.

The “Pose” star, 50, graced the red carpet at Sunday’s award show at the Dolby Theatre in Los Angeles, Calif. donning a custom top and gown combination that featured a shimmering sleeveless gold-feathered turtle-neck top and graphic print orange and amber-colored ball skirt depicting the interior of the Cupola Room at Kensington Palace.

According to Page Six, the effervescent performer was heard teasing his carpet look at a party ahead of the awards, saying, “I have something cooking for the Oscars. It’s a surprise. I can’t tell any of you. Just you wait.”

Last year, Porter turned heads when he walked the red carpet in a custom-made Christian Siriano tuxedo gown. His unique style essentially "broke the Internet," becoming a top trend on Twitter and Google as the night carried on.

Porter’s look is already playing well with those on social media with many making note of the unfavorable weather in Los Angeles that made Billy Porter bundle up.

According to the Associated Press, Porter and others were seemingly rained on during a brief downpour that sent many in the area running for cover or to find protective tarps for their camera equipment.

“Oh my God the tent is leaking,” said one photographer who noticed a hole over the massive Oscars sign.

A twitter user tweeted a photo of Porter wrapped in a gray blanket, prompting Porter to respond, “It’s raining in LA and it’s cold Betches!!!”