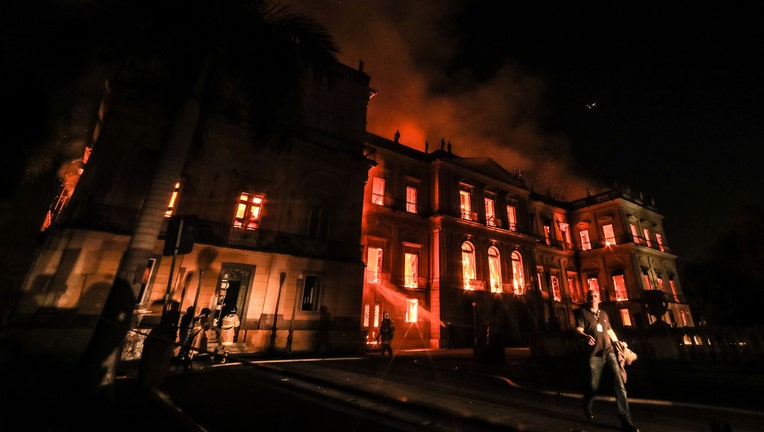 RIO DE JANEIRO (AP) -- Firefighters dug through the burned-out hulk of Brazil's National Museum on Monday, a day after flames gutted the building, as the country mourned the irreplaceable treasures lost and pointed fingers over who was to blame.

The museum held Latin America's largest collection of historical artifacts, and the damage was feared to be catastrophic. One official told a Brazilian news outlet that as much as 90 percent of the building's contents may have been destroyed.

For many in Brazil, the state of the 200-year-old natural history museum quickly became a metaphor for what they see as the gutting of Brazilian culture and life during years of corruption, economic collapse and poor governance.

"It's a crime that the museum was allowed to get to this shape," said Laura Albuquerque, a 29-year-old dance teacher who was in a crowd protesting outside the gates. "What happened isn't just regrettable, it's devastating, and politicians are responsible for it."

The cause of the fire that broke out Sunday night was not known. Federal police will investigate since the museum was part of the Federal University of Rio de Janeiro. But protesters, commentators and museum directors themselves said years of government neglect had left the museum so underfunded that its staff had turn to crowdfunding sites to open exhibitions.

Luiz Fernando Dias Duarte, the museum's deputy director, criticized authorities for starving the museum of vital funding while spending lavishly on stadiums to host the World Cup in 2014.

"The money spent on each one of those stadiums - a quarter of that would have been enough to make this museum safe and resplendent," he said in an interview in front of the still-smoldering ruins aired on Brazilian television.

Roberto Leher, rector of the Federal University of Rio de Janeiro, said it was well known that the building was vulnerable to fire and in need of extensive repairs. Duarte said he was in the habit of unplugging everything in his office at night because of the risk.

Civil defense authorities were concerned that internal walls and the roof could collapse further, so officials had to wait to conduct a full accounting of losses.

Duarte said that anything held in the main building was likely destroyed. Cristiana Serejo, a vice-director of the museum, told the G1 news portal that as little as 10 percent of the collection may have survived. The collection included pieces that belonged to the royal family and a painting by the Brazilian artist Candido Portinari.

The building, which was once home to the royal family, also housed extensive paleontological, anthropological and biological specimens. It was home to a skull called Luzia that was among the oldest fossils ever found in the Americas. It also held an Egyptian mummy and the largest meteorite ever discovered in Brazil - one of the few objects that officials could confirm had survived.

Brazil has struggled to emerge from a two-year recession and seen its political and corporate elite jailed in Latin America's largest corruption investigation. The country has been riven with deep political divisions following the impeachment and removal of former President Dilma Rousseff.

The protesters gathered outside the museum gates tried several times to push into the site, demanding to see the damage and calling on the government to rebuild. Police held the crowd back with pepper spray, tear gas and batons.

"This fire is what Brazilian politicians are doing to the people," said Rosana Hollanda, a 35-year-old high school history teacher, who was crying. "They're burning our history, and they're burning our dreams."

Signs of disrepair were evident: The fencing was dilapidated, stonework was cracked and lawns appeared untended.

The museum's budget had fallen from around $130,000 in 2013 to around $84,000 last year, according to Marcio Martins, a spokesman for the museum. This year was on track to include an increase from last year.

In a sign of how strapped the museum was, when a termite infestation last year forced the closure of room that house a 13-yard-long dinosaur skeleton, officials turned to crowdfunding to raise the money to reopen the room.

The institution had recently secured approval for nearly $5 million for a planned renovation, including an upgrade of the fire-prevention system, officials said.

"Look at the irony. The money is now there, but we ran out of time," museum Director Alexander Kellner told reporters at the scene.

President Michel Temer announced Monday that private and public banks, as well as mining giant Vale and state-run oil company Petrobras, have agreed to help rebuild the museum and reconstitute its collections.

French President Emmanuel Macron offered, in a tweet made in French, to send experts to help rebuild the museum.

Brazil is in the midst of a national election campaign and some candidates on the left seized on the fire as an example of the disastrous effects of budget cuts implemented by Temer's government. The budget data showed that cuts to the museum's budget began under the previous left-wing government.

Fire department spokesman Roberto Robadey said firefighters got off to a slow start because the two fire hydrants closest to the museum did not work. Instead, trucks had to gather water from a nearby lake.

There were fire extinguishers in the museum, but it was not clear if there were sprinklers, which are problematic for museums because water can damage objects, Kellner said. Serejo said that smoke detectors were not working.

Marcus Guidoti, a doctoral candidate in zoology who had visited the museum to study insect specimens, said the neglect dates back years.

"Let this free us from the ignorance that fails to appreciate culture, science and our national identity," he wrote on Twitter.