Protests in the Fairfax District

A curfew is now in effect across the city of Los Angeles. Mayor Garcetti has requested the national guard to help keep order in the city tonight.

LOS ANGELES - After four days of widespread protests in Los Angeles due to the death of George Floyd, Mayor Eric Garcetti has issued a curfew in order to curb the violence.

The curfew originally was only for the downtown Los Angeles area, but hours after his announcement Garcetti expanded the curfew to the entire city of Los Angeles. The curfew goes into effect Saturday at 8 p.m. until 5:30 a.m. Sunday.

Los Angeles residents with cell phones may have received this alert around 7:00 p.m. Saturday night: 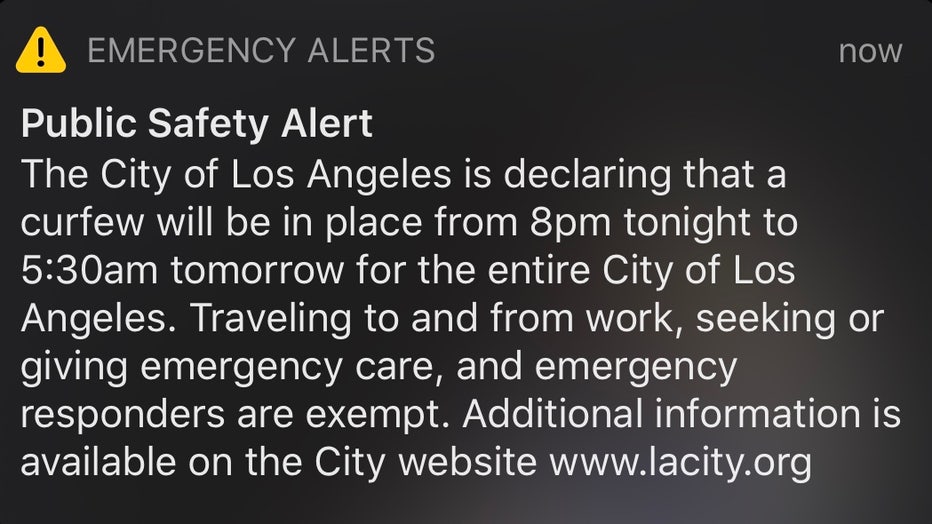 The curfew will help authorities clean the area after several businesses were looted. The police department says no one is allowed in public or on the streets; violators can be arrested.

Shortly after Garcetti's first announcement, the cities of West Hollywood and Beverly Hills followed along.

The city of West Hollywood says they will enforce an 8 p.m. curfew for Saturday, May 30.

Meanwhile, the Beverly Hills Police Department announced that a curfew will go into effect at 8 p.m. Saturday to 5:30 a.m. Sunday. They also announced that Rodeo Drive has been closed to vehicular and pedestrian traffic.

Garcetti is urging protesters to go home, stop the violence and protest in peace.

“That is not the way to have anybody’s voice heard. For that 1 or 2% of protesters that think that’s the way to make the statement, do not do a disservice to the memory of George Floyd. Do not make a disservice to the folks that have died at the hands of brutality that we all stand against,” Garcetti exclaimed.

Earlier today a massive violent protest broke out around noon in the Fairfax District. Several police cars were vandalized, include a patrol car that was fully engulfed in flames.

Saturday marks the fourth consecutive day that protesters took to the streets demanding justice for George Floyd, who died Monday after being handcuffed and pinned to the ground by Minneapolis Police Department officer, Derek
Chauvin, who pressed his knee on the 46-year-old man's neck for several minutes while three other officers looked on.

Video footage of the arrest, in which Floyd is heard saying "I can't breathe,'' spread widely online, and all four officers were fired.

Chauvin was charged with third-degree murder and second-degree manslaughter on Friday.