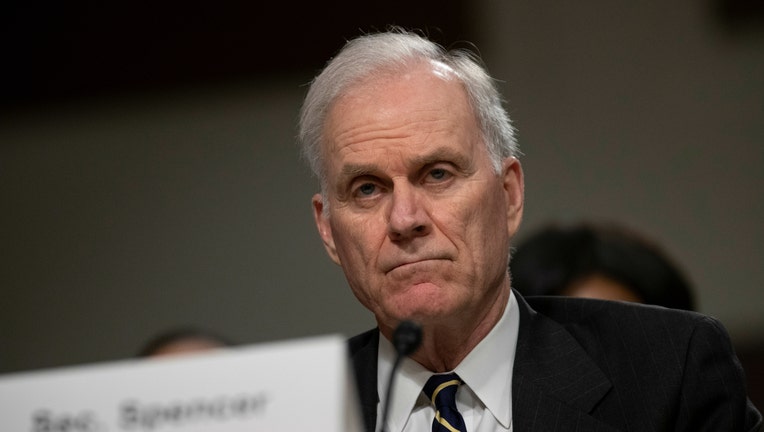 Secretary of The Navy, Richard Spencer, testifies during a Senate Armed Services Committee hearing on Navy readiness on April 9, 2019 in Washington, DC. The hearing is being held to discuss the "posture of the Department of the Navy."

Esper said he had lost confidence in Navy Secretary Richard Spencer and alleged that Spencer proposed a deal with the White House behind his back to resolve the SEAL's case. Trump has championed the matter of Navy Chief Petty Officer Edward Gallagher, who was acquitted of murder in the stabbing death of an Islamic State militant captive but convicted of posing with the corpse while in Iraq in 2017.

Spencer's firing was a dramatic turn in the fast-changing and politically charged controversy. It exposed fissures in Trump's relationship with the highest ranks of the U.S. military and raised questions about the appropriate role of a commander in chief in matters of military justice.

Gallagher was demoted from chief petty officer to a 1st class petty officer after his conviction by a military jury. Trump, however, restored Gallagher's rank this month.   The situation escalated again in recent days.

On Wednesday, the Navy had notified Gallagher that he would face a Navy SEAL review board to determine if he should be allowed to remain in the elite force. While Trump then tweeted that he would not allow the Navy to remove Gallagher from the SEALs by taking away his Trident Pin, which designates a SEAL member, the White House told the Navy it could proceed as planned, according to a Navy officer who spoke on condition of anonymity to discuss internal matters.

That initially appeared to diffuse the situation. The Navy SEAL review board was due to hear Gallagher's case on Dec. 2.

Spencer, speaking Saturday at an international security forum in Halifax, Nova Scotia, said that he did not consider a tweet by Trump a formal order to stop the Navy review board.

A spokesperson for Spencer, Navy Cmdr. Sarah Higgins, said Spencer had no immediate comment. The White House did not provide details of Spencer's alleged private proposal regarding Gallagher.

That effectively gives Trump the outcome he sought.

In a letter to Trump acknowledging "my termination," Spencer cited the critical importance of "the rule of law" and the Uniform Code of Military Justice but added that he had concluded that he and the president appear no longer to share the same understanding of "the key principle of good order and discipline."

"I cannot in good conscience obey an order that I believe violates the sacred oath I took in the presence of my family, my flag and my faith to support and defend the Constitution of the United States," he wrote. He did not cite a specific order. 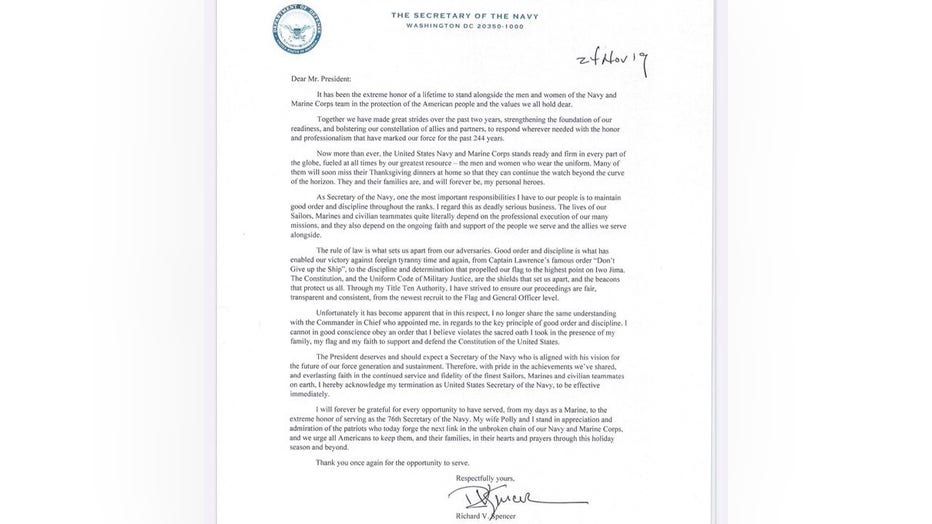 Chief Pentagon spokesman Jonathan Hoffman said Esper's position had been that the Navy's disciplinary process should be allowed to "play itself out objectively and deliberately."

"However, at this point, given the events of the last few days," Esper decided that Gallagher should be allowed to retain his SEAL status, Hoffman said. He said Esper had concluded that Gallagher could not, under the circumstances, receive a fair shake from the Navy.

In the written statement, Esper said of Spencer: "I am deeply troubled by this conduct shown by a senior DOD official. Unfortunately, as a result I have determined that Secretary Spencer no longer has my confidence to continue in his position. I wish Richard well."   Gallagher, speaking Sunday on "Fox & Friends," alleged the Navy was acting in retaliation.

"They could have taken my Trident at any time they wanted," he said. "Now they're trying to take it after the president restored my rank."   Those who have their Trident pins removed will no longer be SEALs but could remain in the Navy. The Navy has revoked 154 Trident pins since 2011.

Spencer, 65, had served as Navy secretary since August 2017. He was a Wall Street investment banker and is a veteran of the Marine Corps. He and Esper were Pentagon peers during the period that Esper served as Army secretary, prior to being sworn in as defense secretary last July.

In a series of tweets Sunday evening, Trump said he had been unhappy with the Navy's handling of the Gallagher case. "Likewise, large cost overruns from past administration's contracting procedures were not addressed to my satisfaction," Trump added without specifics.

Senate Minority Leader Chuck Schumer, D-N.Y., issued a statement saying Spencer "did the right thing" and "should be proud of standing up to President Trump when he was wrong, something too many in this Administration and the Republican Party are scared to do. Good order, discipline, and morale among the Armed Services must transcend politics, and Secretary Spencer's commitment to these principles with not be forgotten."

Sen. Jim Inhofe, The Oklahoma Republican who chairs the Armed Services Committee, said Trump and Esper "deserve to have a leadership team who has their trust and confidence." He also acknowledged that he and Spencer had disagreed at times over the management of specific Navy programs.

Trump said he was nominating Kenneth Braithwaite, a retired Navy rear admiral and the current U.S. ambassador to Norway, to succeed Spencer. In a tweet, Trump called Braithwaite "a man of great achievement and success."