Democratic presidential candidates offered two very different debates during their final forum of 2019. In the first half, they spent much of their time making the case for their electability in a contest with President Donald Trump. The second half was filled with friction over money in politics, Afghanistan and experience.

LOS ANGELES (AP) - Democratic presidential candidates offered two very different debates during their final forum of 2019. In the first half, they spent much of their time making the case for their electability in a contest with President Donald Trump. The second half was filled with friction over money in politics, Afghanistan and experience.

The candidates jousted cordially over the economy, climate change and foreign policy. But it was a wine cave that opened up the fault lines in the 2020 field.

That wine cave, highlighted in a recent Associated Press story, is where Mayor Pete Buttigieg of South Bend, Indiana, recently held a big-dollar Napa Valley fundraiser, and Sen. Elizabeth Warren — who along with Sen. Bernie Sanders has eschewed fundraisers in favor of small-dollar grassroots donations — slammed him for it. “Billionaires in wine caves should not pick the next president of the United States,” Warren said.

Buttigieg struck back, noting that he was the only person on the stage who was not a millionaire or billionaire. He said that if Warren donated to him he’d happily accept it even though she’s worth “ten times” what he is. He also added that Warren and only recently sworn off big money donations.

“These purity tests shrink the stakes of the most important election,” Buttigieg snapped.

It was an unusually sharp exchange between Warren and Buttigieg. The two have been sparring as Warren’s polling rise has stalled out and Buttigieg poached some of her support among college-educated whites.

And Warren was not the only one going after Buttigieg. Sen. Amy Klobuchar of Minnesota hit him on another front, namely what she said was his lack of experience compared to her Senatorial colleagues on stage.

Still, the divide is about more than Warren and Buttigieg. It’s about the direction of the party — whether it should become staunchly populist, anti-corporate and solely small-dollar funded, or rely on traditional donors, experience and ideology. 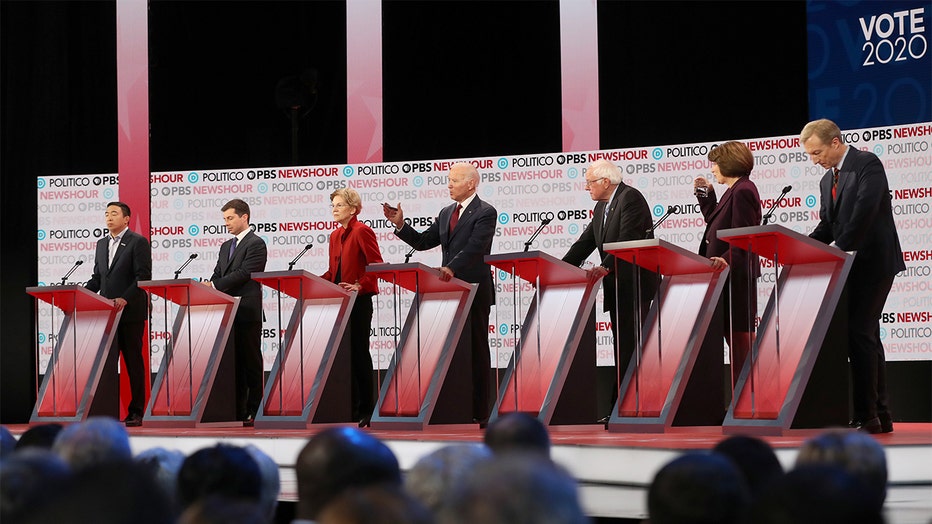 The first question in the debate was about impeachment. But the answer from the Democratic candidates was about electability.

Most candidates had no answer to their party’s biggest challenge — getting Trump’s voters to abandon him over his conduct.

Warren talked about one of her favorite themes, “corruption” in Washington. Sanders talked about having to convince voters Trump lied to them about helping the working class. Klobuchar, a former prosecutor, laid out the case against Trump as if she were giving the opening statement in his Senate trial.

Buttigieg said the party can’t “give into that sense of hopelessness” that the GOP-controlled Senate will simply acquit Trump because Republican voters aren’t convinced. But Buttigieg didn’t provide any other hope.

Only businessman Andrew Yang gave an explanation for why impeachment hasn't changed minds. “We have to stop being obsessed about impeachment, which strikes many Americans like a ball game where you know what the score will be.”

Instead, Yang said, the party has to grapple with the issues that got Trump elected — the loss of good jobs.

Race took the debate stage toward the end of the first hour, as questions of diversity were posed to candidates.

Asked why he was the lone minority candidate on the debate stage, Yang said most people of color don’t donate to political campaigns because they lack the disposable income.

Yang, who is Asian American, lamented the absence of California Sen. Kamala Harris — who suspended her campaign earlier this month despite qualifying for the debate — and New Jersey Sen. Cory Booker, whom Yang predicted would return to the debate stage.

He then turned the issue into a pitch for his candidacy, telling moderators his proposed “freedom dividend,” which would give every American $1,000 a month, would “guarantee” he would not be the only minority candidate on stage.

Klobuchar was asked what she would say to white Americans uncomfortable with the idea of becoming a racial minority. She responded that the country must “strive for a more perfect union,” which means including people of color in economic progress and fighting voter suppression.

Sanders said climate change is also part of addressing racial inequality, and said all candidates “have an obligation” to speak to issues such as criminal justice, the economy and the environment. particularly in the absence of candidates of color.

Former Vice President Joe Biden has held steady throughout the Democratic race as one of the top two or three candidates by almost any measure. He has done that with debate performances described as flat, uneven, and uninspired.

He had a better night Thursday, even on a question about of one of his views that causes fellow Democrats to groan: that he can work with Republicans once he beats Trump in November.

"If anyone has reason to be angry with the Republicans and not want to cooperate it's me, the way they've attacked me, my son, my family,” Biden said, a reference to Trump’s push to investigate his son Hunter that led to the president’s impeachment. “I have no love. But the fact is we have to be able to get things done and when we can't convince them, we go out and beat them.“

Unlike others on the stage, he said pointedly that he doesn’t believe it’ll be impossible to ever work together with the other party.

He came close to trouble by initially saying he would not commit to running for a second term, then quickly said that would be presumptuous to presume a first one.

AMERICAN ROLE IN THE WORLD

Is the greatest danger to America's foreign interests and alliances coming from within the White House?

Democratic presidential candidates faulted Trump on multiple fronts for his failure to lead in key disputes and areas of international friction, including in the Middle East and China.

Buttigieg said Trump was "echoing the vocabulary" of dictators in his relentless attacks on the free press. Klobuchar said the president had "stood with dictators over innocents." And Tom Steyer warned against isolating the U.S. from China, saying the two nations needed to work together on climate change.

On Israel, Biden argued that Trump had played to fears and prejudices and stressed that a two-state solution was needed for peace to ever be achieved.

The former vice president said Washington must rebuild alliances "which Trump has demolished.'“

In June, Yang was a political punchline. During the first few Democratic debates, the entrepreneur, who has never before run for office, looked lost onstage, struggling to be heard over the din of nine other candidates.

But on Thursday night, Yang looked like a pro.

When the candidates debated complex foreign policy, Yang talked about his family in Hong Kong, the horror of China’s crackdown there and how to pressure them to respect human rights. When some candidates equivocated over whether nuclear energy should be used to combat climate change, Yang had the last word when he said: “We need to have everything on the table in a crisis situation.”

When a moderator noted that Yang was the only candidate of color on the stage, the technology entrepreneur rattled off statistics about the lack of African-American and Latino wealth and how that hampers those groups donating to politicians.

Then, like a crack politician, he brought it back to his campaign’s theme — a guaranteed government income for all. That and Yang’s unpolished demeanor has helped him raise the money and public support to make Thursday’s stage while other more experienced politicians have fallen from competition.

WORD OF THE NIGHT

If there was a drinking game among debate watchers involving the word corruption, it might lead to a hazy morning.

Rivals for the 2020 nomination repeatedly framed President Donald Trump's administration as one infected with lawlessness and ethical blindness, arguing that voters should deny him a second term.

We've "seen the impact of corruption," Elizabeth Warren said early in the debate.

"We have a president who is running the most corrupt administration in the modern history of this country," said Bernie Sanders, echoing one of his familiar lines from the campaign trail.

The descriptions of a rogue administration came in response to a question on impeachment. Candidates each offered an indictment of how Trump's White House has crossed the nation's legal guardrails.

Joe Biden defended the impeachment vote as a necessity and said as a candidate “my job is to make the case he doesn't deserve to be president.”