California church shooting victim 'sacrificed himself so that others could live'

LAGUNA WOODS, Calif. - The heroic actions of a Laguna Niguel doctor who died while trying to save fellow parishioners during Sunday's shooting at Geneva Presbyterian Church are being described by authorities as "literally the meeting of good versus evil."

He has been identified as Dr. John Cheng, 52, according to Orange County officials. He leaves behind a wife and two children.

According to witnesses, Cheng charged the suspect, 68-year-old David Chou of Las Vegas in an attempt to disarm him, which allowed other parishioners to intervene. A pastor threw a chair at Chou and they were able to hogtie him before law enforcement arrived.

After Cheng tackled Chou, he was shot multiple times and died at the scene, authorities said. 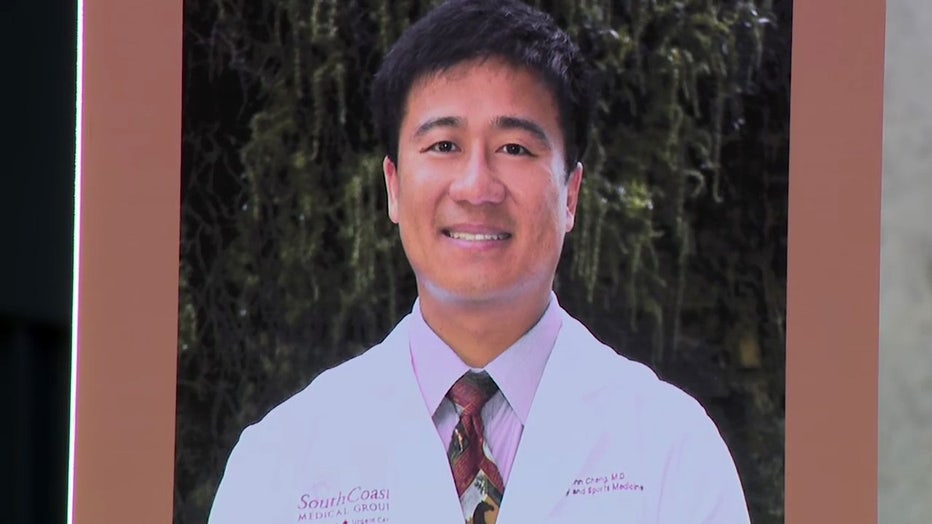 Authorities described Cheng as a "beloved member of the community, known for his hard work and work ethic in sports medicine."

Orange County District Attorney Todd Spitzer called out Dr. Cheng and the other parishioners' actions as "the most heroic activity one could ever imagine."

"Dr. Cheng, understanding that there were elderly [people] everywhere and they couldn't get out of the premises because the doors had been chained after others had been shot, he took it upon himself to charge across the room and to do everything he could to disable the assailant. He was shot and then there was an attempt to shoot him again. But the gun jammed and he succumbed to his injuries. He sacrificed himself so that others could live. That irony in a church is not lost on me."

In an update given on the afternoon of May 16, Sheriff Barnes said Dr. John Cheng died a hero.

Four others were taken to the hospital for treatment of gunshot injuries. At last check, two were listed in good condition, two in stable condition, and one victim's condition is unknown.

Authorities said two of the victims are a married couple in their mid-80s.

All parishioners in attendance at Sunday's luncheon were Asian Americans ranging in age from 66 to 92.

The suspect in the Laguna Woods church shooting has been identified as 68-year-old David Chou of Las Vegas.

Authorities said it is believed Chou was upset about political tensions between China and Taiwan. They classified the shooting as a "politically motivated hate crime" targeting the Taiwanese community. Police believe that Chou may have traveled to the area the Saturday before the shooting. Police say before the shooting he chained doors closed and put superglue in locks.

He was booked on one felony count of murder and five felony counts of attempted murder, according to the sheriff's office.

Chou is eligible for life without the possibility of parole, or death, according to Spitzer, who said he was at the scene to assess "whether we pursue or seek death with respect to hate crimes."

"When you were in that room last night with Dr. Cheng, who lost his life, you could feel… you could see the chaos. It was permeable. It was life-changing. It was overwhelming. And now it's our job as members of law enforcement to continue this investigation, to conclude it, and to prosecute this individual to the fullest extent of the law while always supporting the victims," Spitzer added.

Numerous search warrants have been served on Chou and his home in Las Vegas, as well as a vehicle registered to him located in the church parking lot. Authorities said he is believed to have lived in the United States for many years, in other states including Texas.

Authorities said there's no direct connection to the church or any member of the church they are aware of.

Jail records show Chou is being held on $1 million bail. It’s not immediately known whether he has a lawyer who can speak on his behalf.

LINK: Get ongoing updates from FOXla.com