HOUSTON - As the U.S. faces a record number of new daily cases of the novel coronavirus, it’s also grappling with the issue of some Americans still refusing to wear a mask in public despite health officials warning that we must do so in order to keep the economy open and potentially save tens of thousands of lives.

“We’re in this for the long haul and one of the things that can absolutely keep cases down, and it’s been shown in studies, is having everyone wear a mask. Everyone needs to wear a mask,” said Dr. Hilary Fairbrother, an emergency medicine physician in Houston, Texas, a state that this week saw its highest one-day total of cases since the pandemic began. 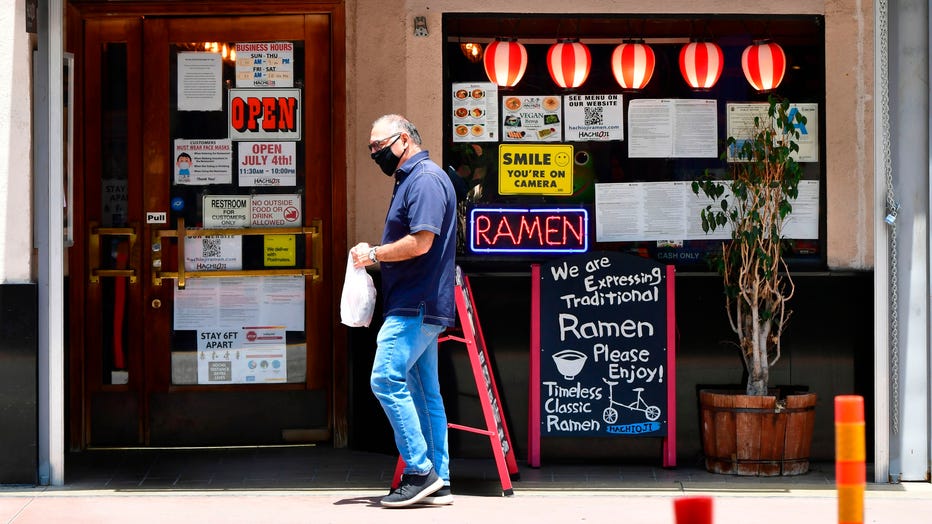 A man wearing a face mask walks past a ramen restaurant in Los Angeles, California on July 1, 2020, after indoor restaurants, bars and movie theaters across much of California were ordered to close for at least three weeks. (Photo by FREDERIC J. BROW

Whether some feel a mask mandate is a violation of personal freedoms, they’re confused about the science on its effectiveness, or they simply don’t want to be inconvenienced — the reality is that some Americans aren’t wearing them, nor are they obeying social distancing rules, and doctors such as Fairbrother are sounding the alarm.

“I understand that people don’t want to wear masks, but if that is you for whatever reason, then you also need to not be going into the store and being around people in public, because right now, we’re in a public health crisis,” Fairbrother said.

RELATED: Confirmed coronavirus cases are rising in 40 of 50 states

Dr. Bradley Dreifuss, another emergency medicine doctor in Tucson, Arizona, recently penned a poignant op-ed for the New York Times describing how close health care workers are to breaking. Arizona, along with Texas and Florida, have emerged as the country’s latest epicenters of the outbreak.

Dreifuss said he’s been living apart from his wife and daughter for the past two and a half months to prevent infecting them.

“I get angry when I see people refuse to wear a mask or physically distance from others or stay home when they could because it is inconvenient — or as a political statement,” Dreifuss wrote. “If you do not wear a mask and physically distance, you are putting yourself and others in harm’s way. You are putting us in harm’s way. Then you will expect us to risk our lives to save you.”

What science says about masks

Official health guidance states that everyone should wear a cloth face covering in public settings, especially when other social distancing measures are hard to maintain, such as during a trip to the grocery store. The exceptions are babies and toddlers who could suffocate, those who have trouble breathing, and anyone who can’t remove a mask without help.

Despite earlier mixed messaging on the subject as scientists continue to learn more about the mere months-old virus, overwhelming scientific evidence shows we need widespread mask usage — including a meta-analysis of 172 studies which found that mask wearing significantly reduces the risk of infection.

A widely-cited coronavirus pandemic model used by the White House showed that if almost everyone wears a mask in public over the next few months, tens of thousands of lives could be saved in the United States. A Goldman Sachs research team found that a face mask mandate would also create a “sizeable” economic benefit, potentially preventing the reinstatement of lockdowns.

There seem to be a number of reasons why Americans refuse to wear facial coverings. Posts on social media have falsely claimed that wearing face masks can decrease oxygen intake, increase toxin inhalation and shut down the immune system — but medical experts say none of that is true. There’s also no evidence that the use of masks causes fungal or bacterial infections.

Some with medical conditions, such as asthma, worry about the ability to breathe while wearing a mask. Not to mention, it can feel uncomfortable when it’s humid outside and you’re not used to wearing one.

“One of the things I like to remind people is that if you have asthma or a lung problem, you are actually more at risk for having serious coronavirus infection,” Fairbrother added. “So it’s actually even more important that that person wear a mask, and only be in areas where other people around them are masked.”

Dr. Richard Davis, who is the clinical microbiology lab director at Providence Sacred Heart Medical Center in Spokane, Washington, recently shared a Twitter thread demonstrating the effectiveness of wearing a facial covering, which has been retweeted nearly 20,000 times.

He suggested those who feel uncomfortable wearing a cloth mask should consider a face shield.

“Masks can be uncomfortable, even when you are less accustomed to wearing them. Just ask health care workers and lab personnel who are wearing masks all day,” Davis said. “People with disabilities, or experience breathing issues or discomfort could consider a clear plastic face shield which can also act as a barrier to droplets, not obscure your face, and may be easier to clean and reuse than a mask.”

The group of researchers used a laser to detect droplets and map their path.

Dr. Vaile Wright with the American Psychological Association said a distrust in government could also play a role in the decision to not wear one.

“There was a lack of understanding around these recommendations. Not that many months ago we were being told that masks weren’t that effective, and now we’re being told to wear them all the time. That makes people not trust,” Wright said. “So that lack of clarity and that inconsistent messaging is really problematic.”

Wearing a mask has somehow become a political statement during the pandemic. President Donald Trump has refused to publicly wear one for months, even telling the Wall Street Journal earlier this month that some people wear masks simply to show that they disapprove of him.

Just this week, amid a surge of infections hammering the South and West, Republican leaders began to push back against the notion that masks are about politics. Both Vice President Mike Pence and Senate Majority Leader Mitch McConnell are now urging Americans to wear one.

Pence has repeatedly flouted mask rules in public, including during a high-profile visit to the Mayo Clinic in April, which drew public backlash.

Wright said the mask dilemma becomes amplified by things like our social media feeds and how others influence us.

“Both sides of the aisle curate our social media feeds to confirm what we already believe, for the most part,” she explained. “Most of us aren’t seeking out a counter-opinion. So if you see over and over that masks don’t work, or this is a hoax, or you are stealing my liberty, then you’re much less likely to follow the recommendation to wear a mask.”

Those who value virtues such as empathy and altruism are more likely to wear one in public, seeing it as wearing a mask to help others, rather than themselves, Wright said.

“The flip side of that is somebody who more highly values things like liberty or fairness. They are the ones who are going to be less likely to wear a mask,” Wright added. “And the challenge is that these two sets of individuals who prioritize these values also mirror our current political party. So masks have then become incredibly politicized.”

RELATED: Twitter says it will add an edit button to tweets when ‘everyone wears a mask’

Wearing a mask can also simply boil down to the influence of others and our sense of social norms.

As of July 2, a total of 20 states required masks in public statewide, as well as Washington D.C. and Puerto Rico, according to Masks4All, an organization working to make masks a requirement in the U.S. and abroad.

Seven states have mandated masks statewide for employees, 18 states have some mask requirements in parts of the state, and four states — Iowa, Montana, Wisconsin and South Dakota — have no known requirement. In Utah, masks are strongly recommended and the state provides them for free.

RELATED: Texans must wear face masks in public spaces in counties with 20 or more COVID-19 cases

Meanwhile, 40 out of 50 U.S. states have shown an upswing in newly reported cases over the past 14 days, according to data compiled by the volunteer COVID Tracking Project.

The surge comes as Americans head into a Fourth of July holiday, which health officials warn could add fuel to the outbreak by drawing big crowds.