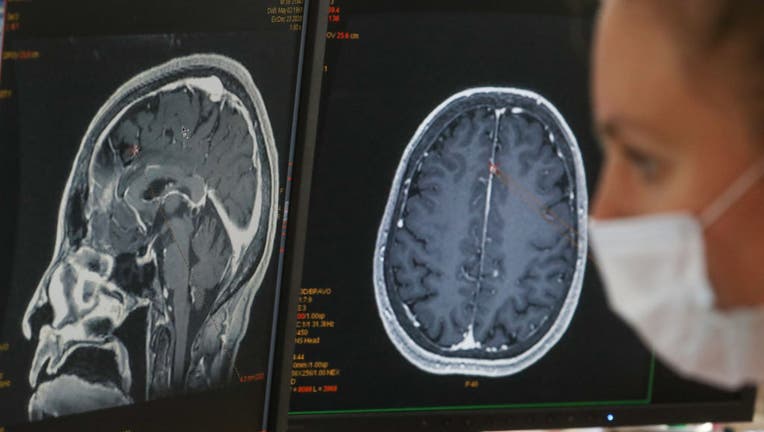 A medical staff member looks at a screen showing scans from a magnetic resonance imaging (MRI) scanner.(Photo by Stanislav KrasilnikovTASS via Getty Images)

SAN FRANCISCO - A recent study suggests brain fog, such as difficulty remembering names or conversations, may be a common symptom after COVID-19 — and it may linger for months.

Researchers from the University of California, San Francisco published their findings last month. They examined 100 patients who were recovering from mild cases of COVID-19. Fourteen non-hospitalized patients reported having cognitive issues that lasted at a median of 98 days.

Researchers highlighted two patients involved in the study. One 33-year-old woman said a week after her COVID-19 diagnosis, she had difficulty focusing, remembering and keeping track of information.  After 149 days, tests indicated that her mental condition had improved, but she had difficulty recalling events in a timely fashion.

A 56-year-old woman also had difficulty focusing when she was diagnosed with a mild case of COVID-19. She reported that her symptoms lasted for 72 days after the initial onset.

CDC Director Dr. Rochelle Walensky grew emotional during a press briefing March 29, 2021, amid an uptick in U.S. cases, deaths and hospitalizations and asked Americans to remain vigilant a little longer.

Scientists said further research is needed to understand the link between COVID-19 and brain activity but said viral infections can affect the central nervous system.

Researchers have been studying the long-term effects of the coronavirus since reports surfaced of people experiencing an array of symptoms not listed on the U.S. Centers for Disease Control and Prevention’s website, lasting months.

Researchers found in some of the worst cases, patients experienced mental decline equivalent to the brain aging by 10 years.

"[Cognitive deficits] were of substantial effect size for people who had been hospitalized, but also for mild but biologically confirmed cases who reported no breathing difficulty," the researchers wrote in a post published on MedRxiv. "Finer grained analyses of performance support the hypothesis that COVID-19 has a multi-system impact on human cognition."

RELATED: Could your symptoms be COVID-19? The signs range from mild to severe

But experts not involved in Hampshire’s study told Reuters that findings should not be viewed as definitive, as the test did not measure for cognitive function pre-infection, and did not complete lengthy follow-up.

The team said their findings should prompt more research into cognitive deficits in people who have survived coronavirus.

FOX News and Austin Williams contributed to this report. This story was reported from Los Angeles.