Glendale Fire says no injuries have been reported after an above-ground tanker had the wrong chemicals inside of it, causing the tanker to off-gas.

GLENDALE, Ariz. - Firefighters were investigating a hazmat situation in Glendale that sent a large plume of smoke into the air.

Officials say the incident happened on Nov. 29 near the airport at a water reclamation facility near Glenn Harbor Boulevard.

Glendale Fire says no injuries have been reported after an above-ground tanker had the wrong chemicals inside of it, causing the tanker to spew gas.

"The chemicals are normally mixed together at the treatment plant, however they are also normally highly diluted with water," Glendale Fire said in a statement. "These were full strength chemicals mixed causing a reaction and thus off gassing. The chemicals are sodium hypochlorite (bleach) and sodium bisulfite. They heat up and create the smoke. There is no risk of this getting into the ground water or spreading through the air as it dissipates very quickly."

The airport's operations have not been affected by the incident. Crews are continuing to monitor the situation until a clean-up company arrives.

"Because the chemicals are actually lighter than air they are just going to lift off and dissipate really quickly, so we're grateful for that because it does not pose a threat to any of the structures or life safety," Capt. Ashley Losch said.

The department added its firefighters train for these types of situations and were quickly able to identify the chemicals and stop the reaction. 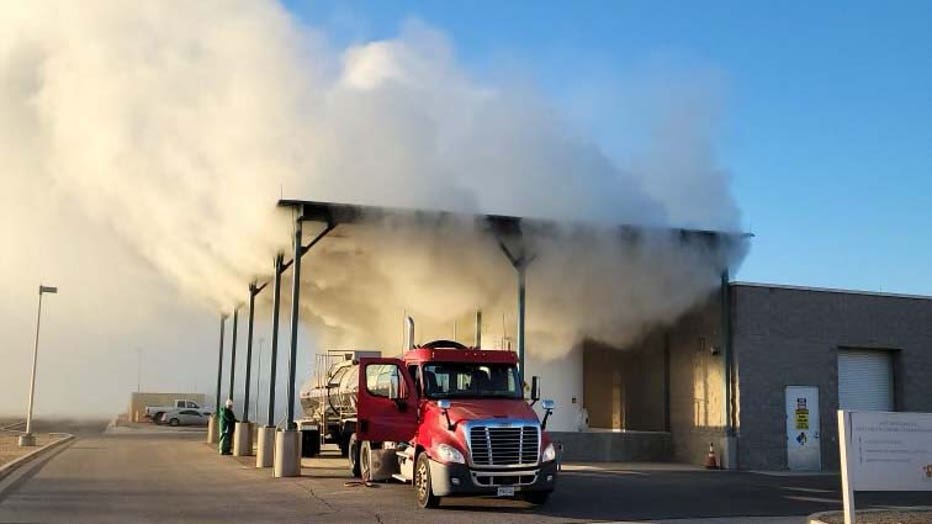 Firefighters are at the scene of a hazmat situation in Glendale that has sent a large plume of smoke into the air. (Glendale Fire Department)