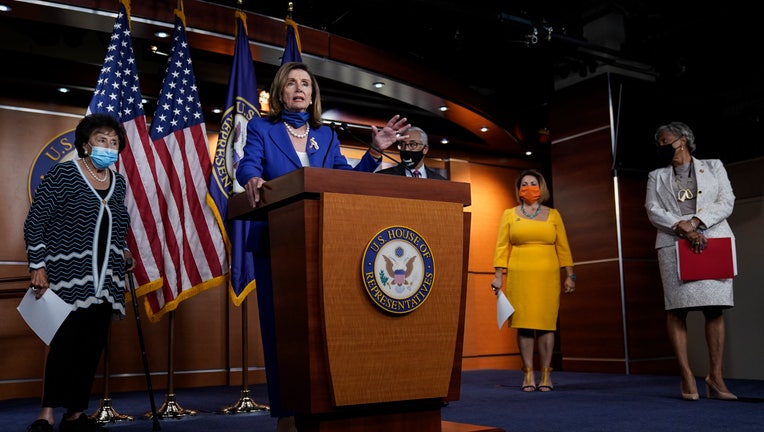 Speaker of the House Nancy Pelosi (D-CA) speaks during a news conference about the Child Care Is Essential Act and the Child Care For Economic Recovery Act at the U.S. Capitol on July 29, 2020 in Washington, DC. (Photo by Drew Angerer/Getty Images)

WASHINGTON (AP) - The head of a congressional coronavirus oversight panel on Wednesday demanded Tennessee's Gov. Bill Lee and three other Republican governors provide documents showing how their states are combating the pandemic.

“I am writing to request information about the private guidance the Administration has provided to Tennessee and whether you plan to implement those recommendations and take other critical actions to slow the spread of the coronavirus across the state,” wrote South Carolina Rep. James Clyburn, a Democrat and chairman of the House Oversight and Reform subcommittee.

Similar letters were sent to governors Brian Kemp of Georgia, Ron DeSantis of Florida and Kevin Stitt of Oklahoma, according to the subcommittee's spokeswoman.

Clyburn's request comes days after White House coronavirus task force leader Dr. Deborah Birx traveled to Nashville to implore leaders to close bars and residents to wear masks. However, Lee has rebuffed calls to roll back the state's reopening efforts and refused to issue a statewide mask mandate even as virus case numbers and hospitalizations continue to rise statewide.

According to the letter, Tennessee is failing to follow at least five different recommendations provided by the White House Coronavirus Task Force — ranging from failing to adopt a statewide mask mandate, allowing indoor dining without strict restrictions and permitting gyms to remain open without limitations in counties with high virus numbers.

The United Nations says coronavirus-linked hunger is leading to the deaths of 10,000 children a month in the first year of the global pandemic because of fears of contamination and movement restrictions.

“The Task Force report privately recommended that Tennessee implement these health measures to help reverse the dangerous spike in cases across the state and to prevent unnecessary deaths,” Clyburn wrote. “Failure to comply is allowing the virus to spread, prolonging and exacerbating the public health crisis facing the state."

A Lee spokesman said the governor's office is reviewing the letter. The office of the Florida governor confirmed the receipt of the letter but did not have an immediate reaction. There was no immediate response from Kemp's office.

Oklahoma's Republican governor disputed the state had any “red zones” — a classification determined by the White House task force — because they had created their own COVID-19 risk alert map that included the White House's “initial methodology.”

“(The state) has not identified a ‘red risk’ county based on its four gating criteria for how COVID-19 is impacting Oklahoma’s healthcare system,” Stitt said. “This is the right approach, and the State will continue to deploy transparent data, tracing and testing support, PPE, and additional resources to inform and mitigate areas of concern.”

According to the letter sent to Stitt, Oklahoma is not following five recommendations from the White House task force. Per the task force, Oklahoma is in the red zone because it has more than 100 new cases per 100,00 population last week and also having a test positivity rate above 10%.

“You made clear on July 15 that you have no plans to roll back the state’s reopening or impose a statewide mask requirement,” Clyburn wrote.

In Florida, the state was flagged as not following three of the White House's recommendations and partially complying three others. The 12-member House Oversight panel, with a 7-5 Democratic majority, has the power to subpoena Trump administration officials and conduct depositions.

Tennessee's Republican Rep. Mark Green criticized Clyburn and demanded instead that the Democrat rescind his request.

“The White House Coronavirus Task Force report has 21 states listed as being ‘in the red zone.’ Yet, for some reason, only four of these states, all with Republican governors, were on the receiving end of your letter,” Green said in a statement.

Green praised Tennessee's response to the pandemic and accused Clyburn of harassing governors “of the opposite political party.”

The four states have until Aug. 12 to respond.