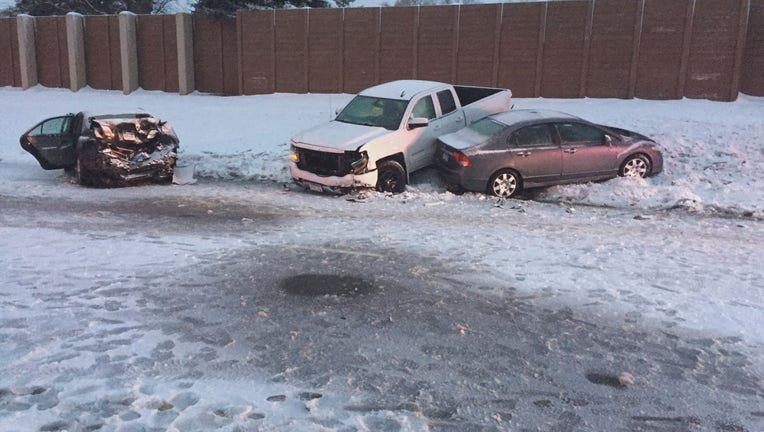 A Champlin man was uninjured in this crash, so he sprung into action and gave CPR to a 2-year-old.

COON RAPIDS, Minn. (FOX 9) - 29-year-old Mitch Heidmann guessed that he only had about one hour of CPR training in the last few years, but it was enough knowledge to try to save a 2-year-old after a crash.

Heidmann, of Champlin, was involved in a crash where a sideways truck struck a few cars in Coon Rapids. Heidmann wasn’t hit and he jumped into action when he saw the child’s father needed help.

The 29-year-old Champlin man was involved in the crash, but was uninjured. So he sprung into action and may have saved the toddler's life.

“I don’t know where it came from. It just happened and it clicked and I said, ‘I gotta do something,’” Heidmann said.

He performed CPR and helped the child keep breathing until paramedics arrived. The child is still on life support at an area hospital.

He said his instincts kicked in and luckily his muscle memory was good enough to call on his CPR skills.

“I would say, within about a minute of me giving the CPR, the kid did a big gulp of air and I was very optimistic during that time. Their dad was right there, the toddler was here on the street and I told him, ‘Hey, it’s good. It’s good news. He’s breathing,’” Heidmann added.

Officer Bryan Platz, of the Coon Rapids Police Department, travels the country giving CPR training. He said he’s seen seasoned professionals clam up when it comes to giving kids CPR. He said it was incredible that someone random stepped into action.

“For him to stand up and do what he did under those circumstances is remarkable,” Platz said. “Regardless of the outcome of this, what he did at that scene gave that family time.”

For Heidmann, he is keeping the child’s family in his prayers and was just happy to make a difference.

If you would like to support the child’s family, visit their GoFundMe.