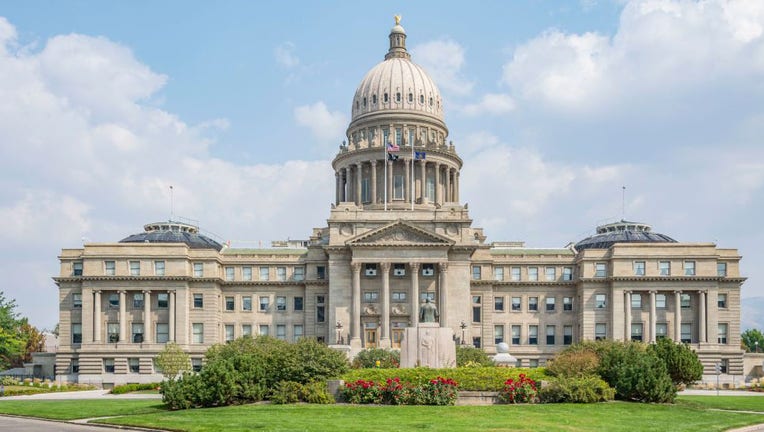 The Idaho State Capitol building in Boise home of the government of the state of Idaho . (Photo by: Education Images/Universal Images Group via Getty Images)

BOISE, Idaho - The Idaho Republican Party will consider 31 resolutions at its three-day convention starting Thursday, including one already adopted by Texas Republicans that President Joe Biden isn’t the legitimate leader of the country.

The Idaho resolution in the deeply conservative state that Donald Trump won with 64% of the vote in 2020 is nearly identical to the Texas resolution that was passed last month, stating: "We reject the certified results of the 2020 presidential election; and we hold that acting president Joseph Robinette Biden was not legitimately elected by the people of the United States."

"(The Idaho Republican Party) has gotten so caught up in conspiracy theories, meaningless culture war issues, that they have quit being able to function as a meaningful political party," he said. "We have got to get away from this authoritarian streak that has infected the Idaho Republican Party, as well as a good part of the nation, because it’s absolutely tearing our country apart."

Idaho's resolution goes further than the Texas resolution in that it falsely states that audits found the vote count for the 2020 election to be fraudulent in Wisconsin and Arizona.

In Wisconsin, election fraud claims have been dismissed by courts or rejected by the state's bipartisan election commission.
In Arizona, where Republicans submitted a slate of fake electors, Trump supporters hired inexperienced consultants to run "a forensic audit" that was discredited. FBI agents looking into events surrounding Trump’s efforts to overturn his 2020 election loss recently subpoenaed the Republican Arizona Senate president, who orchestrated a discredited review of the election.

MyPillow CEO Mike Lindell, a Trump ally, even accused Idaho of allowing election fraud. But the Idaho secretary of state said a partial recount of ballots validated the accuracy of the 2020 results.

Jaclyn Kettler, a Boise State University political scientist, said revisiting the 2020 election by different state or local Republican party officials "seems to be an issue that is commanding a lot of attention still in the Republican party. It may continue to cast doubt on our elections and increase fears of voters that their votes are not being counted."

Among the other proposed Idaho Republican Party resolutions this week is one calling for not recognizing "imaginary identities," a resolution aimed at transgender people.

One resolution, titled "A Resolution to Protect Rural Representation," calls for changing Idaho’s system for statewide elections into a national-style electoral college, a process that sometimes leads to candidates winning without receiving the most votes.

Trump, for example, in 2016 defeated Democratic candidate Hillary Clinton by winning more electoral college votes despite losing the popular vote by about 3 million votes. The proposed system for Idaho would tally electoral votes from counties. Such a change in Idaho would require changing the state’s constitution.

The Idaho Republican Party will also elect officers during the gathering. First-term incumbent Chair Tom Luna, who served two terms as the state's schools chief, is being challenged by Republican Rep. Dorothy Moon. Moon ran unsuccessfully in the Republican primary in May for secretary of state, contending the 2020 presidential election was fraudulent and Biden wasn't president.

Mainstream Idaho Republicans, who would be considered far-right in many states, have dominated the state for three decades. But they have become targets of far-right members of their own party and labeled as RINOs — Republican in name only.

The May primary was a mixed bag for the two groups, and the power struggle will likely continue at the convention.

In the primary, first-term incumbent Gov. Brad Little crushed Trump-backed Lt. Gov. Janice McGeachin, and most other statewide races went to more mainstream Idaho Republicans. But Raul Labrador, a favorite of the Tea Party during his eight years in the U.S. House, defeated five-term Attorney General Lawrence Wasden, well known for a strategy of simply calling balls and strikes that oftentimes irked his Republican colleagues when he gave them legal advice they didn't want to hear.

Several far-right lawmakers in the House lost their seats, but the Senate turned decidedly more conservative with mainstream losses that included the co-chairman of the legislature's powerful budget-setting committee.

This story has been updated to correct that convention begins Thursday, not Wednesday.