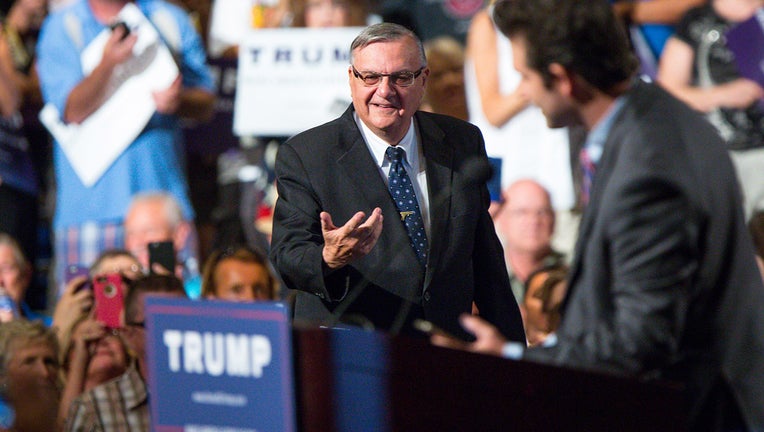 FOUNTAIN HILLS, Ariz. (AP) - It was five days before ballots will be counted in his bid for the Republican nomination for U.S. Senate, and former Arizona lawman Joe Arpaio had no idea what he was doing.

The final days of a campaign are usually frantic, with candidates' every moment scheduled to ensure they meet as many voters as possible. But Arpaio had nothing planned Thursday until a 4:30 p.m. meeting.

"I ought to go to a Mexican restaurant and see how they treat me," Arpaio, 86, said as he sat in his strip mall office. So he and his aides piled into the newly-rented campaign bus in the latest stage of what is likely to be the controversial lawman's long goodbye.

Arpaio served six terms as sheriff of Maricopa County, which includes Phoenix. He won national acclaim and condemnation for his hardline policies. He jailed inmates in tents in the desert heat. He directed deputies to hunt people in the country illegally, a practice a court found to be racial profiling. He lost his 2016 re-election bid after being convicted of contempt of court for continuing that profiling. He was pardoned by President Trump last year.

Now he's disappointed some supporters with his erratic GOP Senate primary bid in which he lags badly in polls behind U.S. Rep. Martha McSally and former state Sen. Kelli Ward. Arpaio's legacy, they fear, will be splitting the conservative vote Tuesday, letting McSally, the favorite of establishment Republicans with whom Arpaio has long feuded, win the nomination.

"It is a kamikaze mission," said Constantine Querard, a political strategist and former Arpaio supporter who supports Ward. "The only question is, is it malpractice, or is the candidate in on it?"

The Republican nominee will most likely face Democratic U.S. Rep. Kyrsten Synema, a formidable opponent whose party hopes can flip the seat from the GOP. Arpaio, analysts say, has become a mere sideshow.

"No one really understands why he's in the race," said Stan Barnes, a Republican lobbyist. "The whisper around Arizona political circles is this is the kind of thing that an 86-year-old egomaniac would do because no one can control him."

As he climbed onto the bus emblazoned with his face and a classic Arizona desert landscape, Arpaio dismissed the criticism. He fumed that McSally, an Air Force Colonel, the country's first female combat pilot and a onetime Trump critic turned supporter, has gotten all the money and attention.

"They're going for her rather than me - the loyalty I showed these people, endorsing them, getting them jobs," Arpaio said in his gravelly monotone. "Anybody in their right mind, if they were hiring, somebody would hire me, not these two novices," he added of McSally and Ward.

The bus was largely empty. The driver was the campaign manager, Chris Hegstrom, Arpaio's former spokesman at the sheriff's department. In the back were a handful of volunteers, including a former Republican candidate for Missouri's U.S. Senate who finished eighth in that primary race and brought his pistol along during the ride.

Hegstrom angled the bus into a nearby Costco parking lot. He needed to pick up hot dogs for a campaign barbecue, and the former sheriff wanted to look for votes.

Arpaio climbed down, removed his snap-on tie and immediately caused a traffic jam.

Victor Antablian, 77, stopped his black Mercedes and climbed out to shake Arpaio's hand.

"What a guy!" he cried. He coaxed his wife Jan out -- she discovered Arpaio had grown up in a western Massachusetts town near her own. Both pledged to vote for the former sheriff.

As Arpaio's aides snapped pictures other cars slowed down. Arpaio waved at the gawkers.

"Don't wave to me, I don't wave to felons," shouted a man in another Mercedes before driving past. (Arpaio's conviction of contempt of court was a misdemeanor.)

Most onlookers were thrilled to see Arpaio. One took a sheet of campaign stickers to give to her extended family. Another said his parents owned a horse ranch near Arpaio's house. Leonardo Venegas, 38, gave Arpaio a straw hat to sign, saying it was in the style of his hometown of Puebla, Mexico.

Delighted, Arpaio told Venegas in broken Spanish that he lived in Mexico for four years while working for the Drug Enforcement Administration.

Venegas, an immigrant in the country legally, dismissed complaints that Arpaio has been racist to Latinos. "We have to recognize that a country or state without laws becomes like Mexico,' Venegas said in Spanish.

John Dach had just moved to Arizona from California, drawn by the state's reputation. "When I think of Arizona and the politicians and the voters, Joe Arpaio is one of the local celebrities you think of," he said.

Dach, 34, was surprised that the former sheriff was an underdog now. "He might be more popular outside the state than inside," Dach said.

As sheriff, Arpaio became an icon for hardline immigration supporters and raised millions of dollars nationwide. He traveled to Iowa and flirted with a presidential run. But his margins of victory back home shrunk as his legal troubles grew.

Maricopa County paid tens of millions of dollars in settlements against Arpaio's agency, which piled up unsolved sex crime cases as it focused on enforcement against people in the country illegally. Arpaio arrested one Republican county supervisor who criticized him (ultimately, no charges were filed). Much of the county's growing Latino population and others mobilized against him. Arpaio lost his re-election bid in 2016 by 12 percentage points even as Trump won Arizona.

"The longer he stayed, the more people grew tired of his antics," Barnes said.

Republican voters now wonder whether the former sheriff is too old -- he'd be the oldest person ever elected to a first term in the U.S. Senate and would be 92 when his term would end.

Scott Reed, 57, a contractor, shook Arpaio's hand and said: "You should be on a beach somewhere taking it easy."

"I'll race you around the block," Arpaio countered.

Reed revealed he was a Democrat. "I'll get your vote in November," Arpaio said.

Reed looked at the sheriff sympathetically. "Good luck to you, Joe," he said.

Energized by the largely supportive crowd, Arpaio climbed back on the bus. It headed for the Mexican restaurant.

The bus arrived too late for a big reaction - the lunch rush had ended. The owner greeted the sheriff warmly and asked what he wanted.

"Spaghetti and meatballs," Arpaio quipped. He got a bean and cheese tostada.

The scene inside was muted, a far cry from the Costco frenzy. A few people stopped to thank the former sheriff and snap pictures. Others averted their eyes.

After eating, Arpaio and his entourage piled back into the bus. Time to head back for that scheduled meeting.

"I don't feel like I'm in my 80s," a contemplative Arpaio said as the bus cut through the afternoon heat and haze. "I work continuously. I don't have any hobbies."