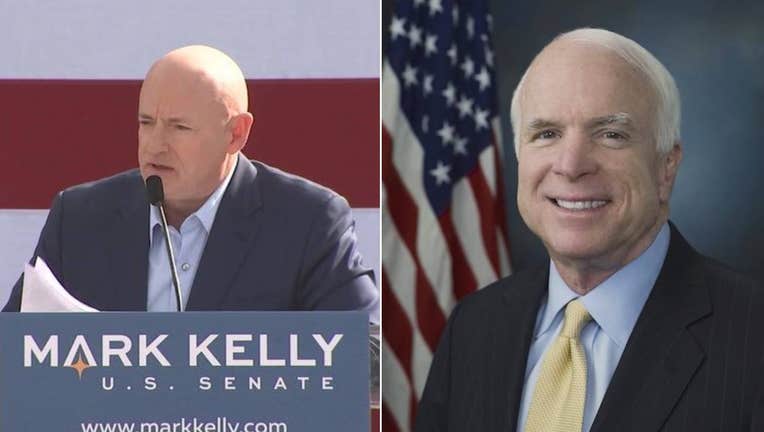 "His legacy is something that cannot be matched," Kelly said. "But it’s what inspires me serving in this Senate seat. And it’s his example of bipartisanship and independence that continues to demand more of us."

McCain’s widow, Cindy McCain, watched from the gallery as Kelly’s guest. She’s awaiting Senate confirmation after President Joe Biden nominated her as the U.S. representative to the United Nations Agencies for Food and Agriculture.

Kelly was elected last year to finish the last two years of McCain’s final term. He is a top target for the GOP and faces a tough reelection fight next year for his own six-year term.

Kelly has gone out of his way to pay his respects to McCain, a Vietnam War hero who was tortured during more than five years of captivity. He visited McCain’s grave at the U.S. Naval Academy the day before taking office last year and talks regularly about being inspired by McCain’s example not just as a politician but also as a fellow Navy fighter pilot and a prisoner of war.

McCain was elected six times to the U.S. Senate from Arizona and was the 2008 Republican nominee for president. With his "maverick" persona and willingness to buck his own party, McCain remains a revered figure in Arizona, particularly with suburban independents and Republicans whom Kelly will need to win reelection. McCain died of brain cancer in 2018.

Cindy McCain was among Biden’s most high-profile Republican endorsers. She did not weigh in on the race to finish her husband’s Senate term, but her decision not to endorse Republican Martha McSally helped Kelly build his independent brand.

Kelly is a retired astronaut and the husband of former U.S. Rep. Gabby Giffords, whose own promising political career was cut short when she was shot in the head during a constituent event in 2011.

In his maiden speech, Kelly also touted the bipartisan infrastructure deal, which he said will deliver wildfire and drought resiliency in Arizona. He celebrated Arizona’s thriving semiconductor manufacturing sector, saying national security depends on expanding U.S. production of computer chips. And he said the recovery from the coronavirus must focus on building good-paying jobs.

"Arizonans have chased down this virus and the economic fallout that came with it with determination," Kelly said. "I came here to have their back."

Tucson Unified School District and more Phoenix districts have approved for students and staff to wear masks to help stop the spread of COVID-19.

Sheriff's officials said 43-year-old Heather Rutledge of Louisville was hiking Labyrinth Canyon with her husband and three sons when they were all caught in a flash flood.

A science teacher with the Phoenix Union High School District is suing the district in order to put a stop to its mask mandate. Meanwhile, more school districts are implementing mask requirements amid a delta variant-fuelled COVID-19 surge