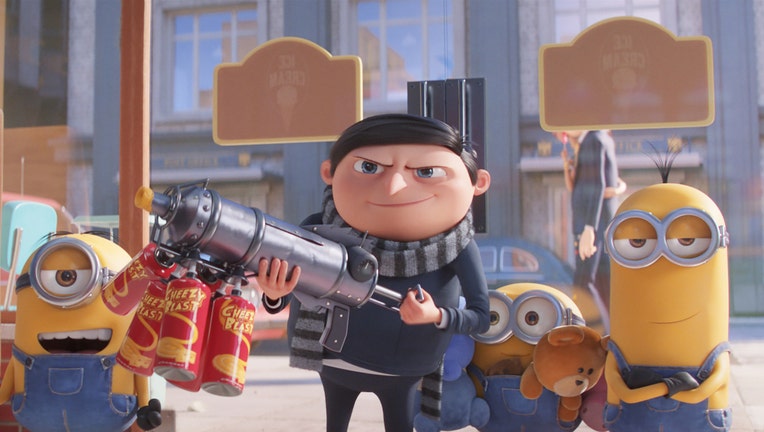 Chicago - When the chattering, pill-shaped yellow creatures known as Minions first appeared in the animated supervillain comedy "Despicable Me," they were essentially a knockoff of the semi-verbal characters seen in classic Pixar movies. Think of the aliens in "Toy Story" or the pillbugs in "A Bug’s Life," cloned and tweaked by upstart cartoon studio Illumination. As the Minions stuck around through two "Despicable" sequels and their own spinoff movie, however, a strange thing happened: Their gibberish Minionese, a mélange of multiple languages including Spanish, Italian, English, Russian and Japanese, has become progressively easier to understand — perhaps even preferable to the more traditional communication methods of the series’ human characters. Yet during this same period, what’s actually happening in any given scene of a "Minions" movie has become more inscrutable.

In "Minions: The Rise of Gru," the confusion starts before the movie even begins: Where exactly does this story fall within the "Despicable" timeline? The first "Minions" was a spinoff set before the little guys crossed paths with supervillain Gru. (The first "Despicable Me" vaguely implied Gru created them, but never mind.) "Rise of Gru" is a sequel to "Minions," but also a direct prequel to "Despicable Me." It brings in the character of Gru as a youngster, inexplicably elaborating on his origin in a movie that’s supposed to be about little weirdos who say "banana!" all the time. Did this really need to be a saga? And if it did, why does the movie named for the Minions feature them so sparingly in the first third of its story?

About "Minions: The Rise of Gru": Even for a silly cartoon, it doesn’t make much sense

Indeed, kids excited to see their Minion pals Kevin, Bob and Stuart (all voiced by "Despicable Me" director Pierre Coffin) may be flummoxed by the Minion-free extended opening of "Rise of Gru." Instead, the movie turns its focus to the Vicious Six, a powerful group of bad guys with barely-punny names like Belle Bottom (Taraji P. Henson), Strong Hold (Danny Trejo) and Wild Knuckles (Alan Arkin) — in case anyone needed reminding that verbal humor is not Illumination’s strong suit. Young Gru (a pitch-adjusted Steve Carell), an outcast at school keeping a fleet of eager-to-please Minions at his mom’s house, desperately wants to join the Vicious Six. As it happens, they have an opening after betraying group founder Wild Knuckles during a heist of a rare stone.

WATCH FREE ON TUBI: Steve Carell in "Crazy, Stupid, Love" — get the app 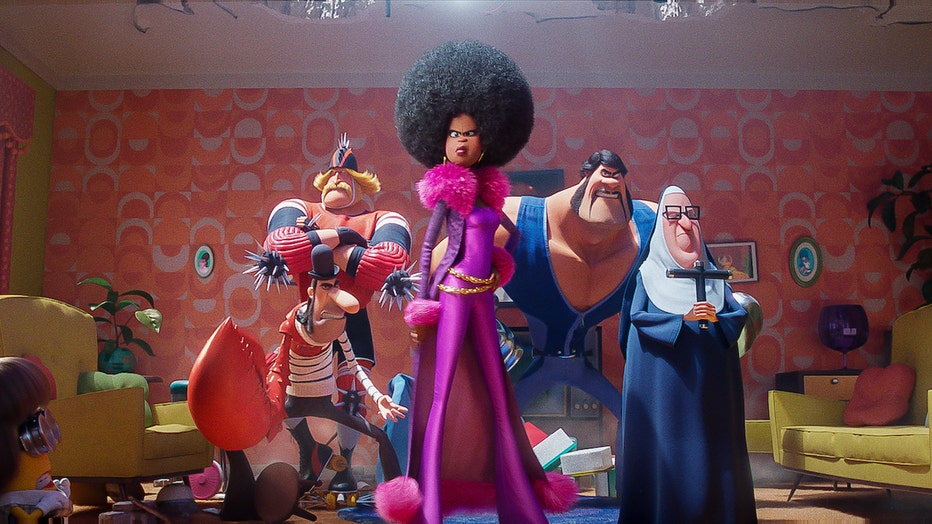 When the Six reject Gru out of hand, he gets his revenge by stealing the stolen stone. Wild Knuckles, also in pursuit of the stone, kidnaps Gru; the main trio of Minions then sets off to rescue him, while newcomer Minion Otto goes off to retrieve the stone, which he has just traded away for a Pet Rock. (The movie is set somewhere in the late 1970s, presumably for the sake of covering overplayed disco hits on the soundtrack.) A series of madcap chases ensue, but the movie spends most of its time running in circles.

It might sound absurd to fault a "Minions" sequel for being confusing nonsense. Here’s the problem: The filmmakers, led by director Kyle Balda, don’t seem to recognize the difference between comic/cartoon logic and employing no logic at all. With comic logic, characters act in ways that make sense to them, making a series of decisions that reach a ridiculous conclusion that subverts expectations. On the other hand, characters who just do whatever "random" thing will get a laugh are employing no logic at all. 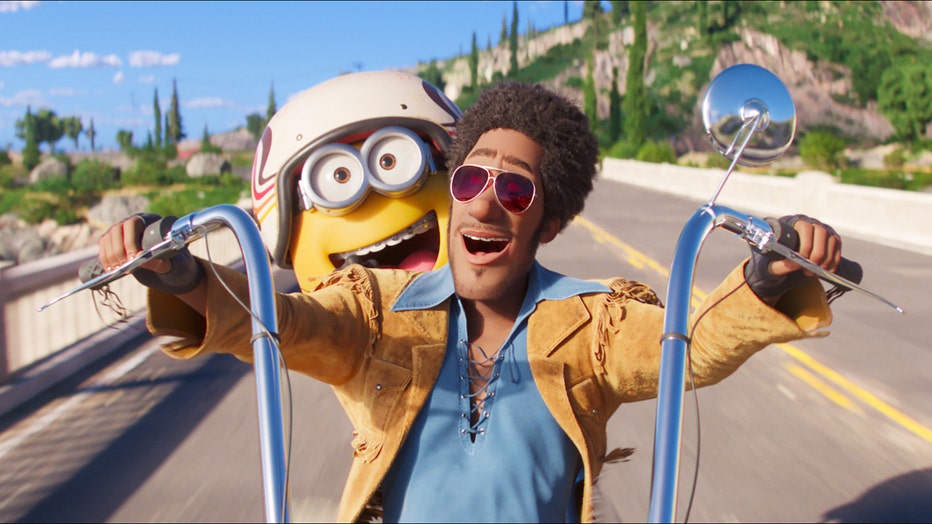 (from left) Minion Otto and Biker (RZA) in Illumination's Minions: The Rise of Gru, directed by Kyle Balda.

At their best, the Minions, like a lot of classic cartoon characters, do employ comic logic. "Minions: The Rise of Gru" has a funny little sequence where Kevin, Bob and Stuart attempt to commandeer a commercial airline to reach their destination. They make a mess of the flight because they are doing what they feel they must to complete their mission, which involves trying and failing to mimic the behaviors of a normal flight crew.

WATCH FREE ON TUBI: Keanu Reeves and Drew Barrymore belt their hearts out in the family musical "Babes in Toyland"

However simple that sounds, it’s not always a guiding principle. Later in the movie, the trio takes an extended series of kung-fu lessons from a stranger. Why, exactly? Seemingly because the filmmakers thought it would be funny to have the legendary Michelle Yeoh voice a kung-fu instructor with the same lazy design (pear shape, untucked shirt) as Rosita the pig from Illumination’s "Sing" movies. Later, the Vicious Six use their enchanted stone to transform themselves and others into animals from the Chinese zodiac, presumably in touching tribute to the fact that "Despicable Me 3" made a ton of money in China. Throughout the overcomplicated movie, things just happen without explanation or escalation, as if following a script mistranslated from Minionese. 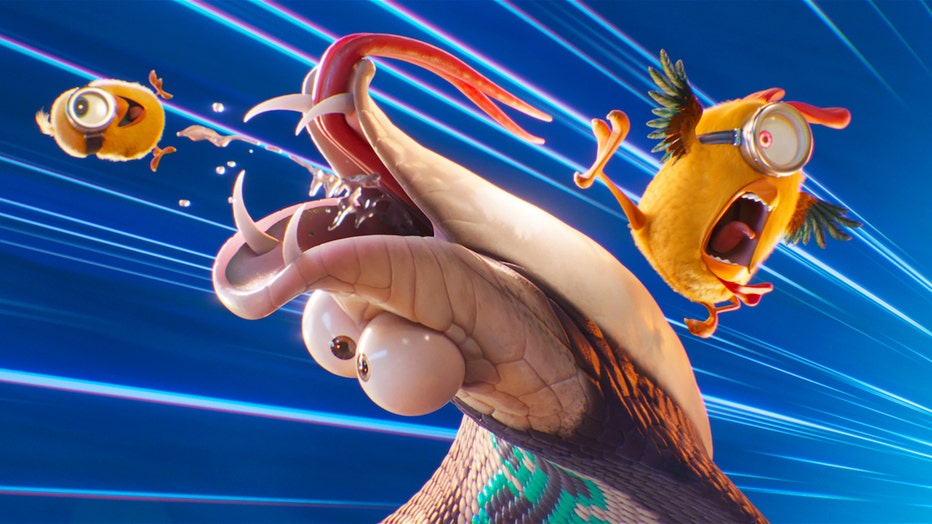 (from left) Illumination's Minions: The Rise of Gru, directed by Kyle Balda.

Yet when "Rise of Gru" tries to tame its own comic anarchy, it’s no better. It may actually be worse, indulging in a misguided attempt to recreate the pathos of the original "Despicable Me" with the relationship between young Gru and cranky (but not especially evil) Wild Knuckles. The first film is the story of a misanthropic loner of a supervillain learning to love an unexpected family; does it really make sense to give him extra backstory where he has a loving and supportive mentor as a child?

See "Minions: The Rise of Gru" for: A chance to hear the laughter of children

It’s a near certainty that most kids will enjoy "Minions: The Rise of Gru." It’s fast-paced slapstick starring their favorite goofballs. There’s nothing wrong with that. It has its moments, and the filmmakers’ desire to explode into kinetic silliness is a likable impulse, one that sets this film apart from more thematically ambitious family fare. Adults may even find its laughs cathartic. But it’s a little unsettling to realize that five movies and 12 years into their signature franchise, Illumination isn’t getting any better at this stuff.

Make it a double feature with "Tales of a Fifth Grade Robin Hood,"streaming free on Tubi

You can find more kids and family entertainment — including "The Boxtrolls," "Coraline" and "ParaNorman" — streaming free on Tubi — get the app

How to watch "Minions: The Rise of Gru"

Everyone’s favorite small yellow pals scamper into theaters on Friday, July 1. "Minions: The Rise of Gru" is not currently available to stream, but the rest of the "Despicable Me" cinematic universe is streaming via Peacock and/or NBC Universal.