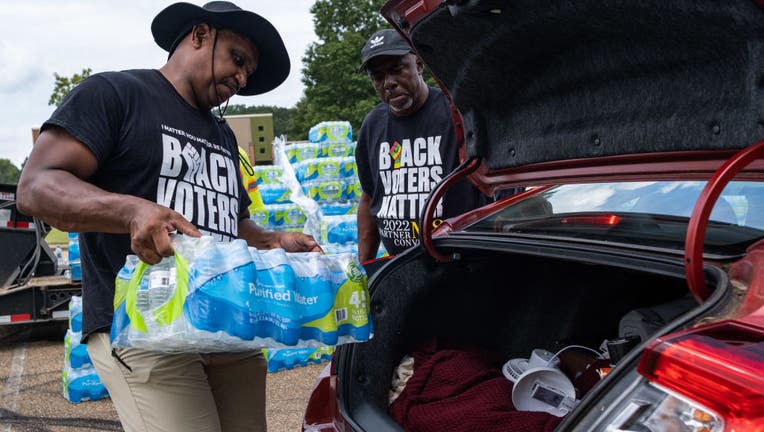 Residents distribute cases of water at Grove Park Community Center in Jackson, Mississippi, on September 3, 2022. - Jackson is enduring days without clean running water, with authorities urging those who still had supplies to shower with their mouths

JACKSON, Miss (AP) - While its water crisis continued, students in Mississippi’s capital were able to return to class for the first time in a week Tuesday with assurances that the toilets and sinks in their buildings would finally work.

Jackson remained under a boil water advisory, but the drop in water pressure that had brought the system to near collapse appeared to be resolved, officials said.

Sherwin Johnson, a spokesperson for Jackson Public Schools confirmed in a statement to The Associated Press on Tuesday that schools had re-opened after a drop in water pressure forced a move to virtual instruction.

In a statement posted to Twitter on Monday, the school district said it had "checked water pressure at each school" and found that "nearly all are suitable" for students and staff to return. Air conditioning systems at several schools depend on the water system to run effectively. The district said it anticipated delays in cooling buildings as temperatures reached the mid-80s on Tuesday.

The couple said they saw Jackson's water crisis on the news and had to help. Credit: James Haynes Jr. via Storyful

"We are continuing to monitor and have portable fans and air conditioners to reduce temperatures in warm or hot areas.

Torrential rains and flooding of the Pearl River in late August exacerbated problems at one of Jackson’s two treatment plants, leading to a drop in pressure throughout the city. The school district said Forest Hill High School in south Jackson still didn’t have water pressure. Johnson said students who attend Forest Hill were transported to alternative sites Tuesday.

In a Tuesday news conference, Jackson Mayor Chokwe Antar Lumumba said the water storage that was built over the weekend has decreased some over the past 24 hours.

"The safety net that has been built up has decreased and has diminished," Lumumba said. "That is why we're prayerful that everything remains consistent."

If a challenge arises with plant operation Tuesday, it will likely impact customers, the mayor said.

In a Monday news conference, Gov. Tates Reeves said water distribution at schools would be scaled down in preparation for students' return to campuses.

"We are moving those resources to our other water distribution mega-sites," Reeves said. "Those sites have slowed down in demand a bit, but we have still put out about 5 million bottles of water over the last several days."

Soon after water stopped flowing through the pipes of many households throughout Jackson, officials rolled a tanker into Forest Hill's parking lot for water distribution. Santiago Matthews, a maintenance worker for the high school, had a garbage container filled to the brim with water last week to fill toilets for the staff working inside. He hauled the garbage container up a short incline back to the high school with water sloshing over the sides.

Reeves said Monday that the city had "zero water tanks at low levels." He also said repairs resulting in cleaner water do not eliminate every risk.

"There may be more bad days in the future," Reeves said.

Michael Goldberg is a corps member for the Associated Press/Report for America Statehouse News Initiative. Report for America is a nonprofit national service program that places journalists in local newsrooms to report on undercovered issues.