ELIZABETH, N.J. - A bill that will let immigrants who cannot prove they're in the country legally get a driver's license was signed Thursday by New Jersey Gov. Phil Murphy.

Murphy, a Democrat, signed the measure in Elizabeth, making New Jersey the 14th state, along with the District of Columbia, to permit immigrants without legal status to obtain a driver's licenses.

"Expanding access to driver's licenses is critical for the safety of New Jerseyans and a step toward building a stronger and fairer New Jersey for all," Murphy said.

Murphy signed the bill just days after the Democrat-led Legislature sent the measure to his desk.

A 2018 study from New Jersey Policy Perspective, a progressive think tank, estimated about nearly 500,000 residents without documentation are of driving age in New Jersey.

The legislation sets up a two-tiered driver's license system. One license would conform to federal REAL ID requirements that include proof of legal residency. Another license would permit people without a legal status to obtain a license. Both categories of license will require individuals to submit six points of identification.

The bill has gotten vocal support from immigrants rights groups, who lined the corridors of the statehouse and cheered loudly when the measure passed.

They say the measure could increase safety because many immigrants without legal documentation already drive without licenses and insurance. They also argue that obtaining a license would help people work and provide for their loved ones. 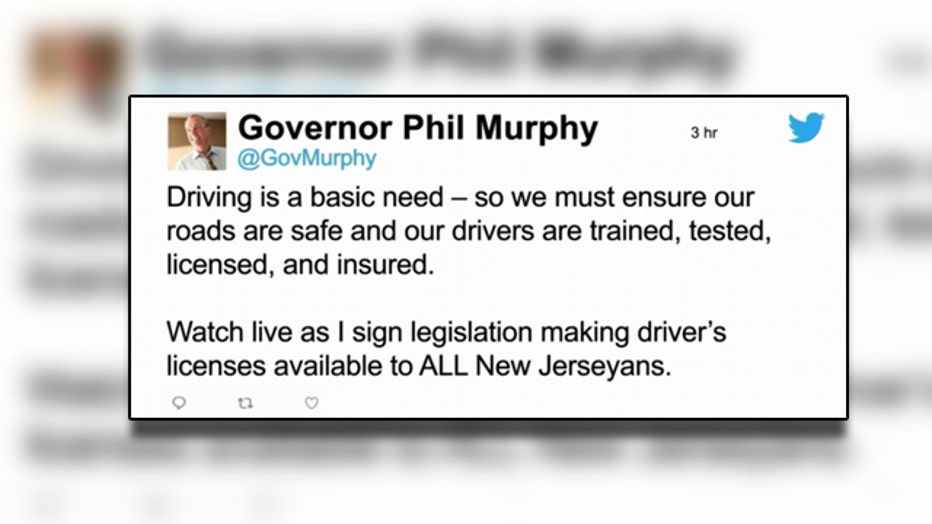 Among the supporters is Motor Vehicles Commissioner Sue Fulton, who cited a study by AAA that indicated unlicensed drivers were more likely to flee the scene of an accident than those with licenses.

The new lawalso requires Fulton to set up a two-year public awareness campaign about the availability of both types of licenses, as well as the requirements to obtain them.

Opponents of the new law worry the measure rewards people for breaking the law and could lead to voter fraud because voter registration occurs when obtaining a license.