PHOENIX - The Phoenix Rescue Mission is hitting Valley streets again this summer to offer cold drinks and resources to the homeless community.

A cold bottle of water can be a new beginning for those on the streets with nowhere to go.

"It's a good way to break the ice," said Danny Sassay with the Phoenix Rescue Mission. "It's so hot out here and having an ice cold water - someone will at least listen to you for a minute."

The nonprofit has been visiting homeless hotspots to try and get people the resources they need by working closely with shelters, substance abuse programs and helping people with paperwork.

"Getting identification to help them further in housing and vouchers - everyone needs identification in order to get housing, and sometimes, that's just the first step in getting them off the street," Sassay said.

This week, the nonprofit has been handing out water to help the less fortunate cool off with hopes of eventually breaking barriers and getting them into housing.

In 2020, the rescue mission had 4,201 interactions. That same year, they were able to get 322 people off the streets and into a home. That number increased more than 50% from years prior. 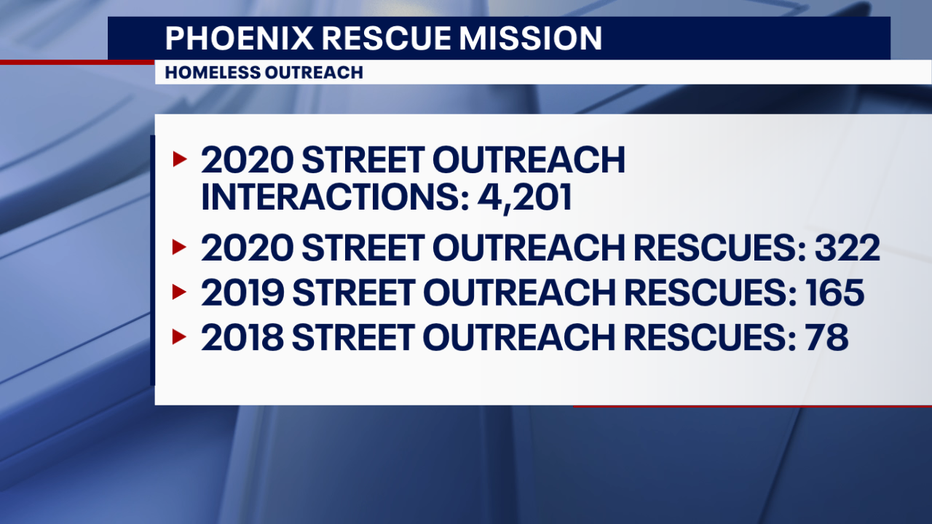 "It's really up to the person," said Sassay. "A lot of times, people who didn't want the help before will take the help during the summer just to get off the street."

Case worker Eric Woods was homeless for hour months before he was hired by the Phoenix Rescue Mission.

"We meet people like that, we're able to get in the house and get a voucher," Woods said. "We're saving that one life it's a joy. It means a lot."