Student fulfills her father’s last wish by graduating with honors

After her parents died in a car accident, the student's teacher promised her that he would see her graduate. Her father's last wish was for her to finish high school with honors. She did, and the teach hosted her own personal graduation ceremony.

PHOENIX, Ariz. - A high school teacher in Phoenix made a promise to one student that he would see her cross the graduation stage, and though the physical commencement ceremony was canceled, Jeff Schrock kept that promise.

The video shows the emotional moment for a student who lost both of her parents, and almost her own life, in a car accident in February of 2019. During the family’s last trip together, the student’s father told her that he wanted to see his daughter graduate high school with honors.

In this video, the school’s assistant principal becomes tearful as he commends the student for fulfilling her father’s last wish.

Schrock said he visited his student in the hospital and promised her that he would see her graduate. She received her diploma in the martial arts clinic where she trains. Her martial arts trainer, Lawrence Robinson, and his wife took the student in after her parents’ accident 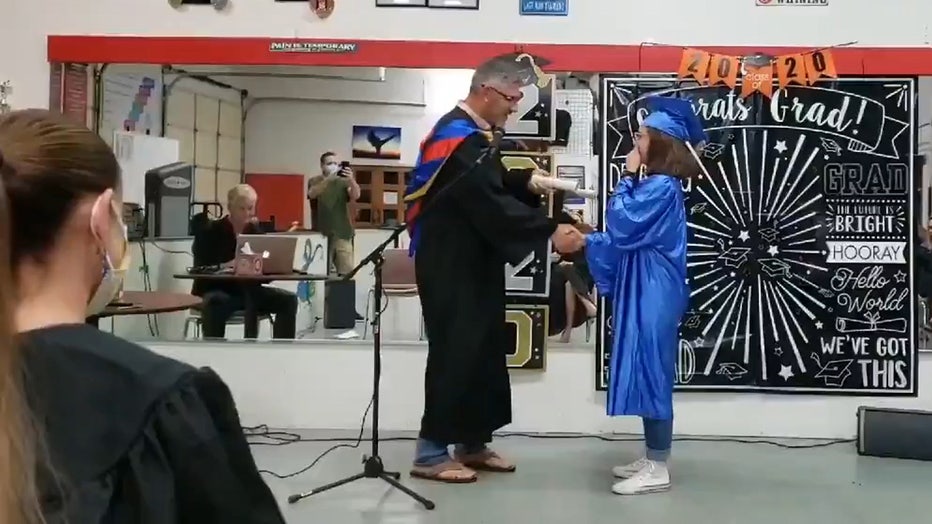 Schrock told Storyful, “After crushing her rehab and fulfilling her father’s last wish, it was now up to me to fulfill my promise to her.”

He admittedly had to “pull some strings” to hold the small graduation ceremony, but found it important to keep his promise.

“I’ve just been inspired by her fight and resiliency through it all,” Schrock said.

Editor's note: In an earlier version of this story, Storyful reported Schrock took care of the student. The story has since been corrected to say her martial art's teacher took her in.