Weather provides the backdrop for many things, and that includes dating behaviors.

From cuffing season to summer flings to mood swings, feelings of love and lust can be ignited – or extinguished – by the weather.

According to Miller, sunny days provide vitamin D that can help boost energy levels, making people more inclined to venture outdoor. On the flipside, rainy or snowy weather can lead to a drop in mood and energy, making people less inclined to go out.

"That's where the dating part becomes a little bit tricky because, in those moments and during those times, people want to be indoors, want to be cuddled up, want to be comfy," Miller said.

"But there is still that desire for most humans to be with someone else."

Time of the season for loving

"At different times a year, you will see different spikes in dating, but really with different intentions in dating," Miller said.

"When we look at the fall and wintertime, we'll see people interested in going on dating apps for the purpose of meeting a particular companion."

According to Miller, the winter months are associated with a couple of factors that make singles more inclined to find that special someone.

One of which is the holidays.

"Thanksgiving, Christmas, Valentine's Day, where there's a huge fear of loneliness that ends up coming up," she said. "We'll see a lot of people really looking to find that companionship prior to those events coming up. "

That fear of being alone is exacerbated by a second factor: the cold weather.

"People are staying inside a lot more, so people are doing a lot less activity," she said.

"They're dark. The days are a lot shorter than they are in the summer, which can be in itself really depressing," Miller said.

"Seasonal affective disorder comes in during those months as well. So, people also aren't inclined to go out, they're not as high energy, and I think it does play a role in how people feel in the dating space. " 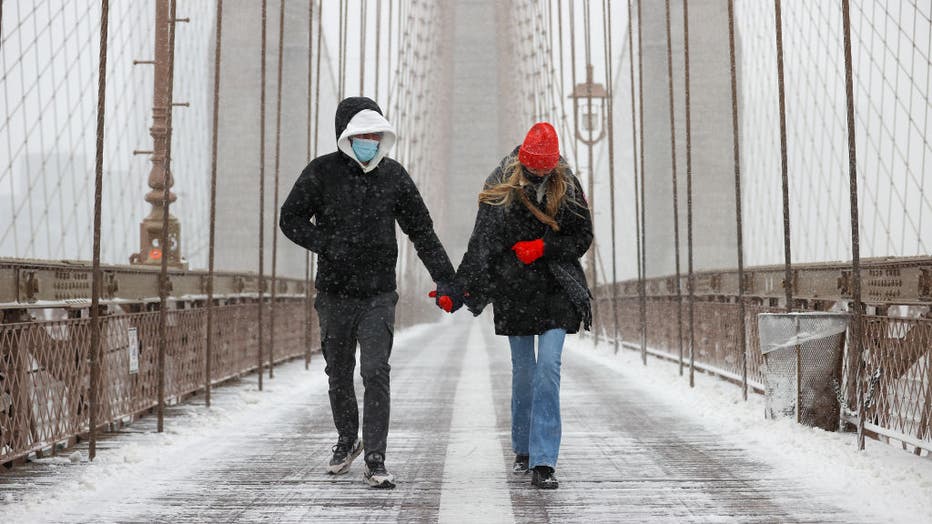 RELATED: Valentine’s Day deals to get back at your ex

This seasonal spike in dating can also be seen in some online dating apps.

According to a Bumble representative, the highest number of messages on Bumble were exchanged between October and early November in 2021 as singles all over the world headed into the start of a major "online dating season" or also widely known as cuffing season.

"Cuffing," a term derived from "handcuffs," involves finding a partner during the fall and winter seasons.

According to Miller, cuffing is a big generalization, but it typically involves a consistent, committal relationship to ensure companionship during a time of year when people are less inclined to go out.

"It gives us security that we're not going to be alone," she said.

According to a Bumble representative, cuffing season also continues following Dating Sunday, the first Sunday of the new year and the busiest day for online dating each year.

Miller said this is due to a combination of people seeking a restart, finding a renewed mindset and creating resolutions for the new year.

"One holiday that people definitely don't want to be alone for is Valentine's Day because of the pressure surrounding romance and dating and all that comes with that time," Miller said.

Social media plays a significant role in this, she added, since many people show vast parts of their life and their relationships online, particularly during the holiday season.

"That just fuels that caution, that desire for people who are not in a relationship to be in one. "

According to Miller, some relationships born out of cuffing season may evolve into something more long-term.

But for others, cuffing season relationships are fleeting. As the warmer months of spring and summer arrive, many "cuffers" tend to depart.

"During the warmer months, we'll see that days are longer, people are out longer," Miller said.

"People are more active, our social schedules are a lot busier, and we will see a lot more people who are active in dating."

She added, people are not just going to depend on one other person for their social activity, as they now have many more people who are out and about, who they can be around.

According to Miller, having more opportunities to socialize generally leads to a pattern of less commitment in relationships during the warmer months.

"The fear of loneliness that we would see in the winter changes a little bit during the summertime," she said. "So, there's not as much of a push to find a person for that companionship."

Matters of the heart

By knowing how much the weather and the seasons can influence mood and behaviors, people can begin to take cautionary measures.

For example, according to Miller, those who are particularly susceptible to seasonal affective disorder can find ways to prepare for the short, dark days of winter.

While some people may use lightbox therapy, Miller still recommends spending time outside, even if it is cold.

"There is science behind the benefit of getting outside in all types of weather," she said.

Another example of taking preventative measures involves matters of the heart.

"We don't want to be surprised when someone is a perpetual 'cuffer' and continuing to be in a relationship during the winter months and then during the summer months, they tend to be single," Miller said.

"When we learn about someone's relationship history and we can start to see that pattern, it can kind of be a red flag at that point."

While this may be a general pattern, Miller said it’s still important to be aware of it and how the seasons and the weather may play a role.