FOX 10's Jennifer Martinez has more on why it's not so easy for the owner to get the trailer back.

SUN CITY, Ariz. - The owner of Harold Brooks Painting says he left his trailer at one of his project sites because it was his wife's birthday on Friday. He locked everything up, but when he returned the next day, it was gone.

Brooks says he was told by police that the trailer was later found, but it's not going to be easy for him to get it back. It was towed to an impound lot and now it's going to cost him to get it out.

"I want to know what I'm missing.. what I have, what I don't have.. what part of my life I have to start back over," said Brooks.

More than 24 hours after Brooks' trailer went missing, there was good news.

"Sheriff called me and said, hey Harold we got good news, we found your trailer."

Except the trailer, according to what Brooks says Peoria police told him, is empty. 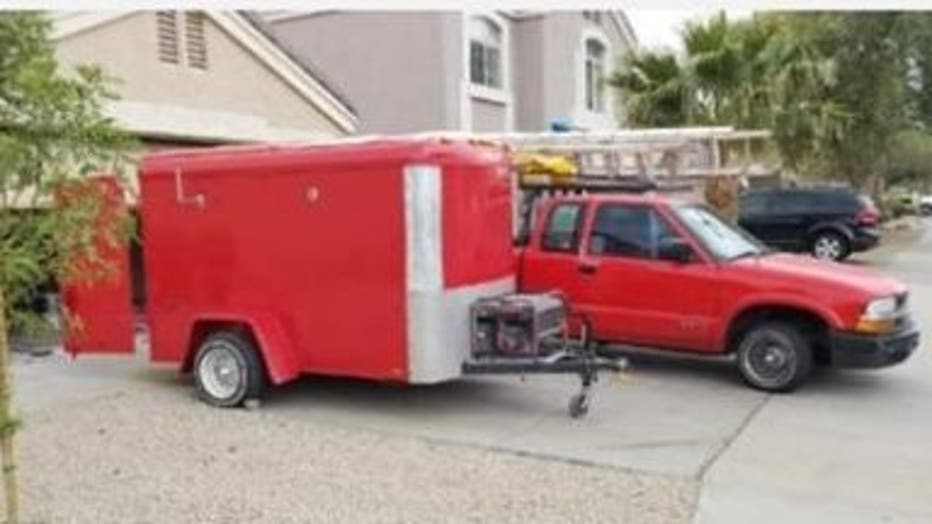 Now, the man who started his business over 10 years ago from scratch, has to start over.

"The tools.. gone... so now I'm stuck with the empty trailer and I got to rebuild," he said.

Brooks says he has insurance, but the loss won't be covered.

"The trailer wasn't connected to my truck at the time. The insurance will not cover it and also with the home owner's insurance.. with the gentleman that owns the property, he's checked in on his homeowner's insurance, but because it wasn't fully in underneath the carport, they can't cover it."

On top of losing more than $35,000 in tools and equipment, Brooks has other issues: getting his trailer out of Western Towing in Glendale and upcoming projects that he has to push back because he has no equipment.

"Tomorrow morning at 5 o'clock, I'm going to be calling a bunch of customers, telling them that I need to push jobs back until I can get some equipment so I can start jobs," said Brooks.

If you have any information about this case, you're asked to call the Maricopa County Sheriff's Office at 602-876-1000.

A fundraiser has been set up for Harold Brooks Painting: https://www.gofundme.com/f/harold-Brooks-Painting