One of the three people killed in a U.S. base attack in Kenya reportedly has a connection to Arizona. FOX 10's Jennifer Martinez reports.

GILBERT, Ariz. - There are reports that one of the three people killed in an attack at a military base in Kenya is a man from the East Valley.

People living in one Gilbert neighborhood identified one of the three men killed as Dustin Harrison. Throughout the day, people living near Harrison's home have placed flowers and American flags outside.

Harrison, along with two others, died following an attack carried out by the terrorist group al-Shabab. Federal Government officials have yet to officially identify the three men killed.

A GoFundMe has reportedly been set up for the Harrison family. 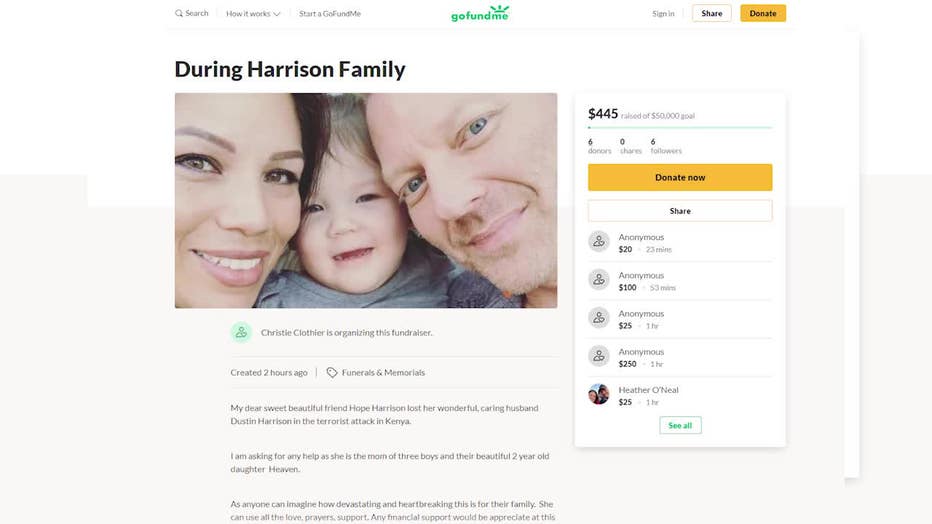 Harrison was not the only person identified via unofficial channels. On Monday, family members identified another victim as 23-year-old Army Specialist Henry Mayfield Jr., who was from the Chicago area.

The attack that killed Harrison and others came just days after an airstrike killed an Iranian general. Military officials say the attack in Kenya is not linked to Iran.

Neighbors did not want to go on camera Monday, but they say Harrison was a great father, husband and a good neighbor who knew people on a first-name basis. According to one resident in the area, the mission in Kenya was supposed to be Harrison's last, and he didn’t want to go back. One person said Harrison was a father to a two-year-old.