DENVER, Colo. - A 35-year-old mother from San Jose has been arrested after the body of her 7-year-old special needs son was found in Las Vegas.

Rodriguez will be booked into an area jail pending extradition to Las Vegas, police said.

Las Vegas police detectives had been on their way to Denver to interview Rodriguez after the body of her son, Liam Husted, was found on May 28 on a trail in Mountain Springs, Nev., Spencer said.

Samantha Moreno Rodriguez, of San Jose, has been arrested after the body of her 7-year-old son was found last month by hiker outside of Las Vegas. Police there discuss the capture of the 35-year-old mom and their investigation into the death of her son Liam Husted.

A 35-year-old mother from San Jose has been arrested after the body of her 7-year-old special needs son was found in Las Vegas. Allie Rasmus reports

"We are all relieved that we were able to get her into custody so quickly," said Spencer, a homicide lieutenant who made earlier pleas for the public to help identify the boy.

Rodriguez's arrest came two weeks after she took off from San Jose with all of her and her son's belongings and left the boy's father a message, police said.

Liam's father got the impression that Rodriguez was simply leaving him.

"There was nothing suspicious in that message that would lead the father to believe that Liam or Samantha were involved in any foul play," Spencer said.

Before her arrest, Rodriguez was last seen at a Denver-area hotel on May 31, authorities said.

Police believe Liam’s body was left after dark May 27 or early May 28 hidden behind a bush at a trailhead off State Route 160, the main highway between Las Vegas and rural Pahrump.

A warrant has been issued for the Samantha Moreno Rodriguez who is wanted in connection with the death of her son, Liam Husted, 7, of San Jose. The boy's body was found on a trail outside Las Vegas and Rodriguez was last seen traveling alone near Denver.

Police have not yet revealed an apparent motive or provided any evidence linking Rodriguez to the death. The two had been on a road trip together. Police have not said how Liam died.

Police learned since Monday where the mother and son stayed in the Las Vegas area, but Spencer declined Tuesday to describe the place or what investigators found there.

In a statement, the family described the boy as having special needs but didn't provide many more details.

At a noon news conference in San Jose, Sgt. Christian Camarillo said there were "no police contacts" regarding family issues, or anything else for that matter, with Rodriguez.

Liam's father contacted San Jose police a week ago, saying he didn't know where his son and his mother were.

"At the time, he was not sure if he wanted to pursue any type of, you know, child-stealing, parental abduction charges on mom," Camarillo said.

The case broke open last week when Spencer, the Vegas detective, spoke to a San Jose police sergeant about a missing person case.

A Las Vegas detective flew to San Jose to retrieve some of the boy's personal belongings, clothing, and a pillow, for forensic scientists to obtain DNA evidence.

The connection was first suggested by a family friend of Liam's mother who told San Jose police that she had not seen Rodriguez or the young boy in over two weeks.

The family friend said she saw a composite sketch of John "Little Zion" Doe that was featured in news coverage and believed it resembled the little boy, according to police.

The woman went to San Jose police late last week to share what information she knew. 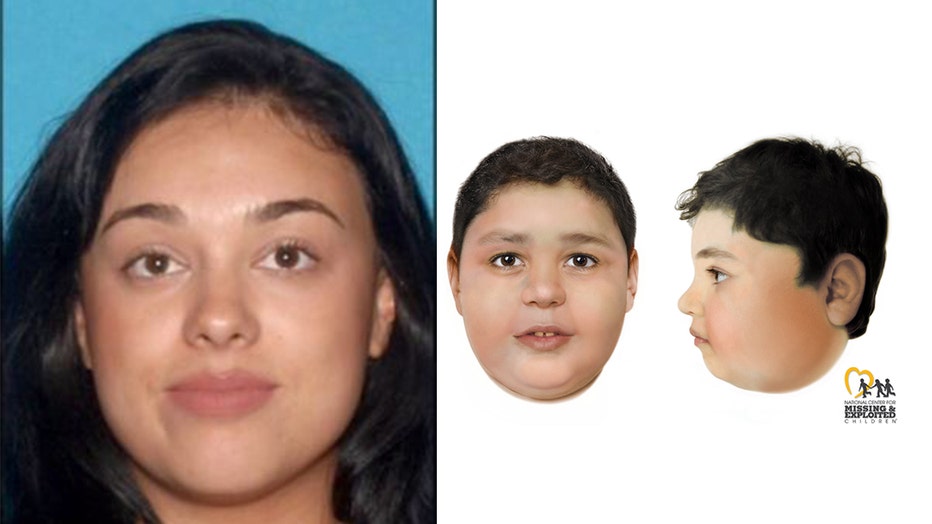 A photo of Samantha Moreno Rodriguez and a sketch of her son, Liam Husted, that helped authorities crack the case.

Liam and Rodriguez left San Jose on May 24, Spencer said, adding that their dark blue 2007 Dodge Caliber was packed full of belongings.

The mother and son were seen May 26 in two Southern California cities, Laguna Beach and Victorville, Spencer said, before they arrived in Las Vegas.

Police say he is not a suspect. Police also haven't identified him.

"The father did not feel that his son was in harm’s way," Spencer said. "Not trying to get the mother into trouble, he did not want to file any type of charges or anything."

Camarillo, from San Jose, also confirmed this: The father did not want to bring any potential charges against Rodriguez, but did feel it was important to document the fact that he hadn't seen his son or his son's mother in a while.

Liam's family told KTVU on Monday that he was a very sweet boy.

"We are devastated. Liam was a happy, sweet, innocent child who adored his father. It is a complete tragedy," the boy's grandfather Chris Husted said in a statement on Monday. "Liam was a special needs child, at a disadvantage and dependent on others' kindness. Unfortunately, his mother took that away."

A former neighbor in San Jose said the family kept to themselves and she never saw any trouble.

"He was just a little boy, he seemed sweet to me," said Elaine Minnelli. "It’s horrific."

A Gofundme has been set up for Liam.

KTVU's Azenith Smith and the Associated Press contributed to this report.