A video shows damage in Springfield, located in southern Colorado, on Dec. 15, 2021, after wind gusts as strong as 107 mph blew through the state. Credit: Christina Ardolino via Storyful

Affected states included Kansas, Nebraska, Iowa, Minnesota and Colorado, the reports said. There was no immediate word about deaths or injuries.

If two suspected tornadoes in Minnesota are confirmed, they'll be the first December tornadoes ever recorded in the state, FOX 9 of Minneapolis reported. The suspected twisters struck near Albert Lea – with damage reported in Hartland -- and in Plainview, with damage there as well, the station reported.

In Kansas, strong winds as high as 98 mph arrived Wednesday after the state was rattled by earthquakes Tuesday and Wednesday, the Topeka Capital-Journal reported. More than 100,000 Kansas utility customers were without power Wednesday night and full service restoration was expected to take several days, the newspaper reported.

At least 13 tornadoes were reported across Nebraska and Iowa, the National Weather Service reported. Both the severity and the timing of the harsh weather were unusual, an NWS meteorologist said.

"To have this number of damaging wind storms at one time would be unusual any time of year," weather tracker Brian Barjenbruch, based in Valley, Nebraska, told the AP. "But to have this happen in December is really abnormal."

What follows is a state-by-state roundup of the impact of Wednesday's storms.

Wind gusts of 74 mph recorded at the Des Moines airport on Wednesday night were the strongest recorded since 1970 that wasn't associated with a thunderstorm, the National Weather Service reported, according to the Des Moines Register.

Gusts were expected to ease overnight into Thursday, the report said.

Much of the Hawkeye State was under storm and tornado warnings, according to the newspaper.

Around 8:30 p.m., winds were carrying smoke into Iowa from wildfires in Kansas, the Register reported.

In Greene County, Iowa, some buildings were flattened, Sheriff Jack Williams told KCCI-TV of Des Moines. A suspected tornado crossed the county from the southwest corner to the northwest corner, Williams told the station. 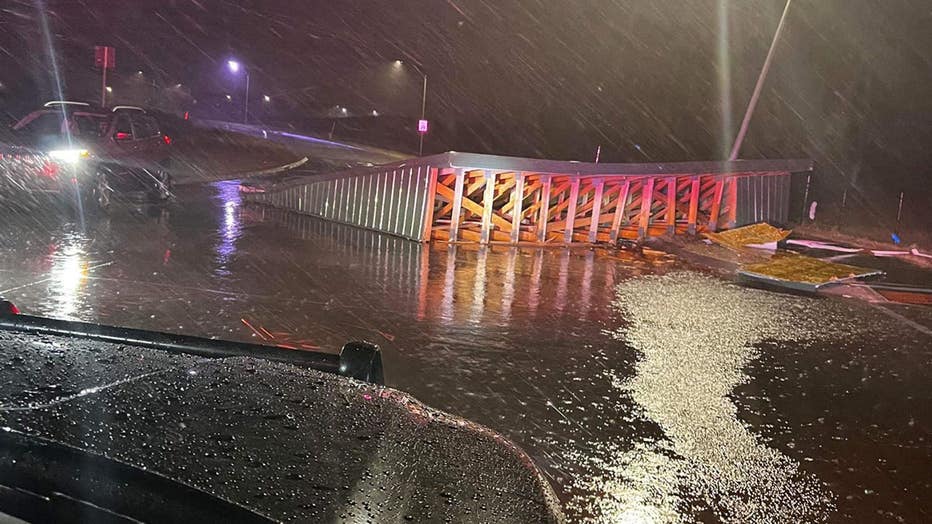 No injuries were immediately confirmed, the sheriff said.

"Major damage" was reported in the southern portion of Jefferson, Iowa, but specific details weren’t immediately available, according to KCCI.

Just south of Jefferson, Adam Glawe said he saw a tornado in the distance, approaching his neighbor’s farm, the Register reported.

"It was closer than I really cared for it to be," Glawe told the newspaper. He said he and his two children quickly sought shelter in their basement, according to the report.

The neighbor later said a barn and a shed were destroyed and their house was damaged but everyone was safe, the newspaper reported.

Photos from viewers posted by FOX 44 of Sioux City, Iowa, showed fallen trees, damage to the roofs of homes, a toppled barn and scattered debris after high winds struck the area around 4:30 p.m.

In Kansas, an official with power provider Evergy said the company was facing "the most widespread damage across our service territory that Evergy has ever seen," the Topeka Capital-Journal reported.

Chuck Caisley, a senior vice president with the company, told reporters that more than 200,000 customers were without power at one point as the central and eastern portions of the state saw golf-ball-sized hail and thunderstorms, the report said.

More than 1,100 Evergy employees were being deployed to assess damage and make repairs, he added, with power restoration expected to take several days.

Smoke from wildfires in Kansas prompted the National Weather Services to advise residents to stay indoors, the Capital-Journal reported.

A Frito Lay plant in south Topeka was shown to have structural damage, according to a photo posted by the newspaper.

Interstate 70 reopened in Kansas around 5:40 p.m. after being closed for much of the day in central and western Kansas because of high winds and low visibility, the report said.

In Wichita, winds reached 100 mph at Russell Municipal Airport around 4 p.m., the Wichita Eagle reported. It was one of the highest wind readings recorded in the state, the report said.

Around 3:30 p.m., the newspaper reported that strong winds blew the roof off the gymnasium of an elementary school in Sumner County, prompted officials to send students home for the day.

Wednesday's strong winds were expected to lead to temperature drops overnight and icy conditions for travelers on Thursday morning, FOX 9 of Minneapolis reported.

The Minnesota Department of Transportation planned to have crews out to assess road conditions during the night, the report said.

"The situation right now is very dynamic and more outages could occur as severe weather continues to move through the state," said Grant Otten, spokesman for the Nebraska Public Power District. "Our crews have been responding and restoring outages as quickly and as safely as possible, but it will take time to assess the damage and make repairs. Crews will be making repairs throughout the evening, but some customers could be without power overnight and into tomorrow depending on the damage impacting their area."

Officials also warned residents to be alert for the presence of downed power lines. They advised residents to stay far away from the lines and to report them to 911 or to the local utility company, FOX Nebraska reported.

In Saunders County, resident Rebecca Goodwin said a suspected tornado lifted the garage behind her home and sent it clear over the house, the Lincoln Journal Star reported.

About three miles away, a shed used for housing old tractors was completely flattened, resident Marlin Otto told the newspaper.

"It happened in about 10 seconds," Otto said, according to the report.

Strong winds in Colorado toppled over trucks, forced road closures and delayed or canceled hundreds of flights, according to reports. The weather service said a wind gust of 100 mph was recorded on the airfield at the Air Force Academy in Colorado Springs.

On nearby Interstate 25, more than a dozen semitrailers blew over in winds that topped 90 mph, according to the Colorado Springs Gazette. 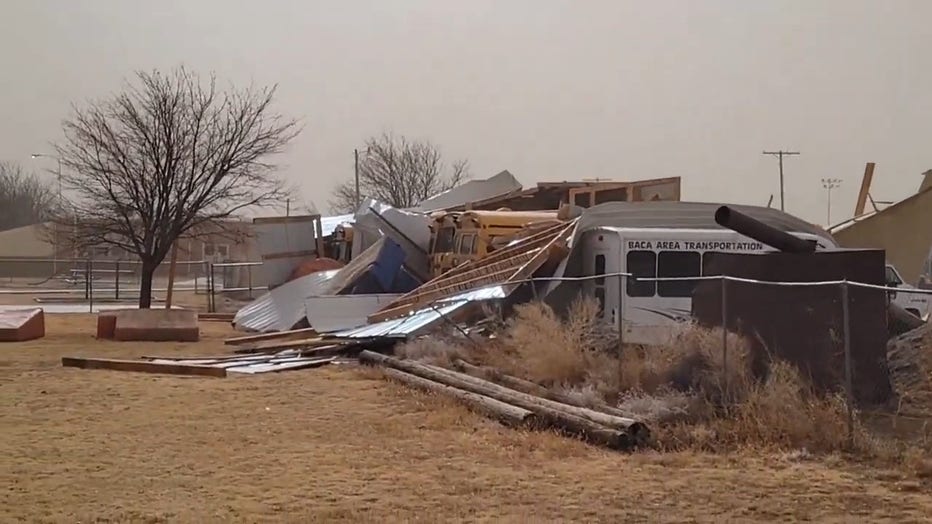 A screengrab from a video shows damage in Springfield, Colorado, on Dec. 15, 2021. (Credit: Christina Ardolino via Storyful)