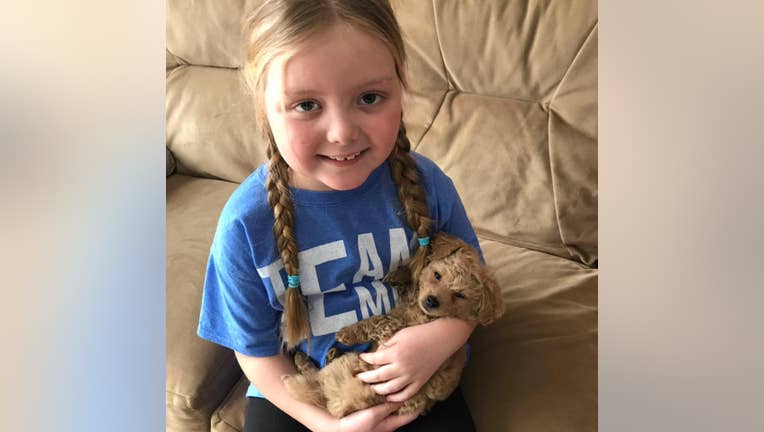 MILWAUKEE - An 8-year-old girl who captured hearts around the world with her viral Facebook post asking for pictures and letters from dog owners has died.

According to a post on the Team Emma Facebook page, Emma Mertens died on Nov. 17 in the arms of her mother and father at her home in Wisconsin. Emma suffered from a rare and inoperable brain tumor known as diffuse intrinsic pontine glioma (DIPG).

"She fought hard against a DIPG Brain Tumor but it was time to go home and leave the pain behind," the Facebook post stated. "In her final hours, she was told how much she was loved and that it was ok to go to God. She will be dearly missed."

Emma was diagnosed with the brain tumor in January. According to USA Today, family members began sending her photos of their dogs to cheer her up since she was a huge animal lover. Pretty soon, the word spread across social media and Emma began to receive thousands of letters and photos of dogs from around the world. In March, nearly 40 different police departments from around her state of Wisconsin — including K-9 officers — visited her at home to put a smile on her face.

"Today, just a few of us (roughly 40) stopped by to see Emma," the Hartford Police Department wrote in a Facebook post. "She had no idea we were coming so she was VERY excited. What an amazing and strong little girl."

Emma's family told FOX 35 News that Orlando, Florida was a special place to her.

"She loved Mickey Mouse and visited Disney for her Make-A-Wish trip."

Unfortunately, they had to cut the vacation short because Emma got very sick during trip.

"In lieu of gifts and flowers, the family is asking that you keep Emma’s memory alive by supporting her foundation at www.emmalovesdogs.org. Through all of this battle, all Emma wanted to do was spread kindness and help animals."