WASHINGTON - President Donald Trump on Monday lashed out at Bubba Wallace, the only Black driver competing at NASCAR’s top level, and appeared to criticize the league for its decision to ban the Confederate flag.

Trump asked on Twitter if Wallace had “apologized to all of those great NASCAR drivers & officials who came to his aid, stood by his side, & were willing to sacrifice everything for him, only to find out that the whole thing was just another HOAX?”

Exploiting racial tensions, Trump wrongly accused Wallace of perpetrating "a hoax" after one of his crew members discovered a rope shaped like a noose in a garage stall they had been assigned to. Federal authorities ruled last month that the rope had been hanging there since at least last October and was not a hate crime. 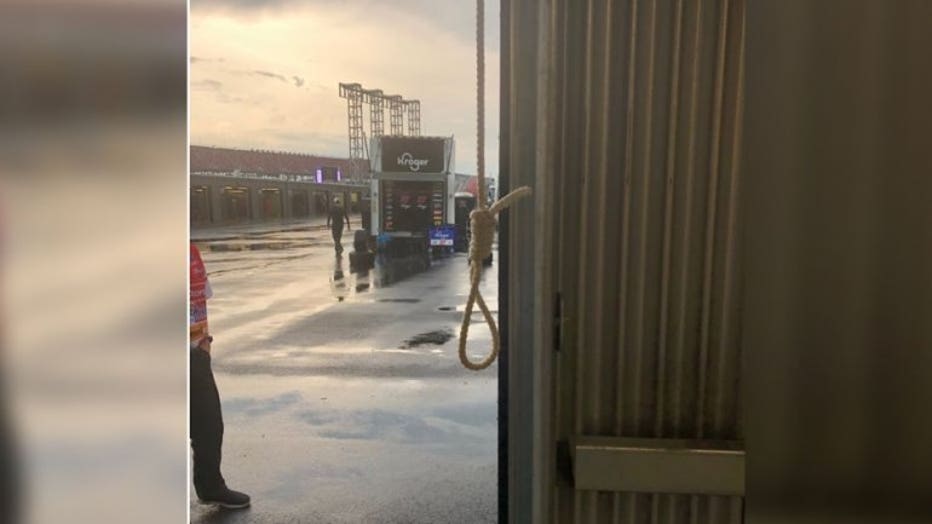 On June 25, NASCAR released an image of the rope shaped like a noose found in Bubba Wallace's garage. (Credit: NASCAR)

“That & Flag decision has caused lowest ratings EVER,” the president added.

NASCAR banned the display of the Confederate flag at all of its events and properties last month.

Hours after the president’s tweet, Wallace responded with a message to “the next generation and little ones following my foot steps.”

“Always deal with the hate being thrown at you with LOVE! Love over hate every day. Love should come naturally as people are TAUGHT to hate. Even when it’s HATE from the POTUS,” Wallace wrote in part. 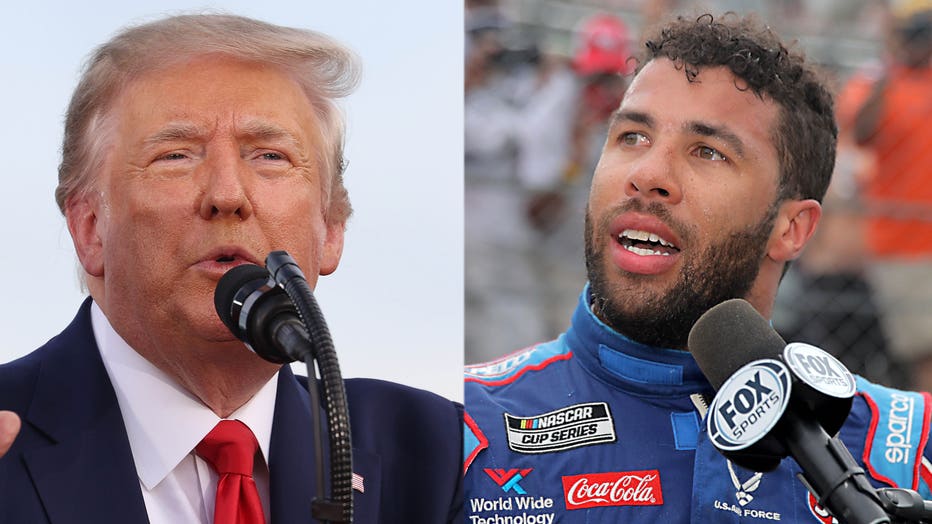 President Donald Trump speaks during an event on the South Lawn of the White House on July 04, 2020 in Washington, D.C., alongside an image of Bubba Wallace speaking to the media after the NASCAR Cup Series GEICO 500 at Talladega Superspeedway on Jun

Wallace, 26, has been outspoken on racial issues in the wake of the civil unrest and global protests sparked by the death of George Floyd. On June 10, Wallace drove in a car with a #BlackLivesMatter paint scheme and donned a T-shirt with the words, “I Can’t Breathe.”

Last month, the lone Black driver in NASCAR’s top racing series had called for the league, one with deep ties to the South, to ban the Confederate flag at its properties and for the organization to formally distance itself from what for millions is a symbol of slavery and racism.

Days later, NASCAR announced it would ban the flag.

"The presence of the Confederate flag at NASCAR events runs contrary to our commitment to providing a welcoming and inclusive environment for all fans, our competitors and our industry," a statement said. "Bringing people together around a love of racing and the community that it creates is what makes our fans and sport special."

NASCAR has been more open in recent times to the eradication of the Confederate flag. Former chairman Brian France in 2015 tried to ban the flying of Confederate flags at race tracks, a proposal too broad to enforce and one that angered NASCAR’s core Southern-based fan base.