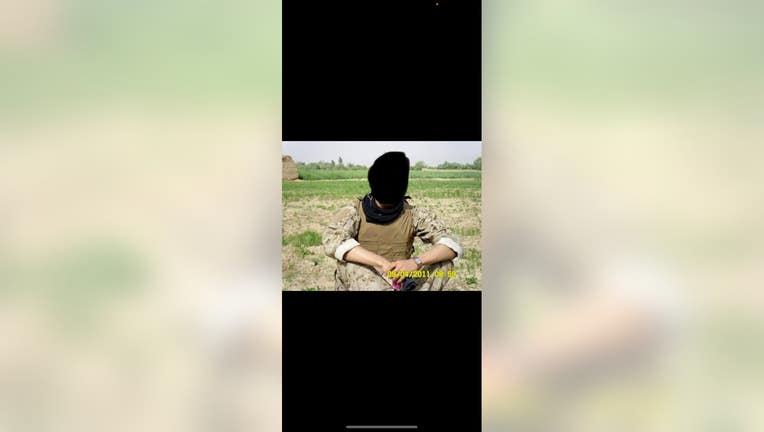 Zekria in 2011 working with U.S. military forces as a combat interpreter.  (FOX News)

EXCLUSIVE: A former combat interpreter with the U.S. military in Afghanistan, also a permanent resident of the United States, is trapped in the Taliban-controlled country after traveling to Kabul in July to attempt to evacuate his family amid the Biden administration’s withdrawal of military assets from the region.

Zekria, 31, who has lived in Arizona since 2015 and arrived in Kabul on July 17 to help his family to safety, told Fox News the Biden administration did not have a "clear evacuation plan." Fox News is withholding his last name.

"There are a lot of people still left behind. My friends, I know them, they are stuck here. Four of them are American citizens. Two from Arizona and two from California," Zekria said, adding they've been experiencing the same struggle to leave the country. Fox News has not been able to contact the Americans he referenced.

"The Biden administration left without any plan, and that is why there are thousands of allies who worked for the U.S. military, American citizens, Afghan Americans, all stuck here," he continued, saying U.S. officials "should have evacuated qualified people first and then the others, but they didn’t."

The Biden administration closed the U.S. Embassy in Kabul and withdrew all military assets from Afghanistan on Aug. 31. Prior to the full withdrawal, the administration says it successfully airlifted more than 124,000 individuals from Kabul, including 6,000 American citizens.

Zekria estimated that many individuals who were airlifted out of Afghanistan were "beggars displaced from other provinces."

"They were not qualified SIVs [part of the Afghan Special Immigrant Visa program]. I can say that," he said. "There are a lot of people like me. We are the ones who are qualified. We put ourselves and our families in danger, and they took people that don’t even have documents."

After the withdrawal, the Biden administration said its mission in Afghanistan shifted from a military mission to a diplomatic one, and officials say they are working to evacuate more Americans, legal permanent residents and Afghan allies. It is unclear the exact number of Americans left in Afghanistan.

Zekria told Fox News he's a permanent resident of the United States with a green card. He shared documents with Fox News, as well as dozens of emails to the State Department and other U.S. embassies efforting an exit from Afghanistan, but said he has not received any response, except for one email with phone numbers for emergency issues from the U.S. Embassy in Doha.

Zekria told Fox News he tried to call the State Department but was told its staffers "only help citizens – not green card holders." Zekria said he has filled out repatriation forms and other necessary documents, as instructed, nearly 40 times.

"I don’t know how this process is working but there is something that is not right," he said. "I pay taxes. The worst thing is my rent and car payment is due in a week and I am scared to get eviction in Arizona while I am here."

He added: "To be honest, I don’t believe I’m getting out safe."

Zekria said he is currently living in a house in Kabul with his wife, three brothers, four sisters, his mother, father and uncle. His father is a retired colonel in the Afghan Air Force, and his uncle worked as a security officer.

Zekria worked with the U.S. military from 2011 to 2015, after serving as an officer in the Afghan Army. Zekria told Fox News he survived a suicide bombing in his unit, and after that experience decided to help the U.S. military as a linguist combat interpreter.

"They know my information and my family. So after six years, I came back to help my family to get somewhere safe," he explained.

As is the case for many Afghans who aided the U.S. military and who remain in Afghanistan, the Taliban have visited Zekria’s family home, he said.

"They searched the house, they were looking for guns and other stuff," he said, telling Fox News that he "luckily" was not home.

"If I was home, I would maybe get in trouble, because the Taliban are doing biometrics. They have all the systems. When they arrest people, they have a biometric fingerprint and they can check people’s backgrounds," he said, concerned that the Taliban would learn of his work for the U.S. military.

Zekria told Fox News the Taliban recently arrested his second cousin. He said he was "beaten so badly he couldn’t even walk."

"There is no safety for anyone – especially for interpreters and the ones who worked with Americans, their families, plus all of the military and the Afghan military – they just arrest whoever worked for the government," he said. "This is why I was scared, and why I came to Afghanistan, to do something, at least, to save my family, but it didn’t happen, and now I got stuck here, too."

In the days leading up to the full withdrawal of U.S. troops on Aug. 31, Zekria said he contacted the now-shuttered U.S. Embassy in Kabul, which gave him a visa document to show at security checkpoints at Hamid Karzai International Airport.

Zekria told Fox News he tried to use the document and his green card to get into the airport but said he and his brother "got beaten by the Taliban." Zekria also said that Taliban soldiers were charging individuals up to $600 to enter at the gates.

"I couldn’t get out and couldn’t help my family," Zekria said. "Everyone is scared."

"There is curfew at 10 p.m. and the Taliban, every night, is getting into houses. They are beating people. I am witnessing it," Zekria said, adding that the Taliban are "searching people’s phones and pockets."

Zekria said he witnessed Taliban soldiers shoot a teenager in the street who tried to run away after soldiers checked his phone.

"You can’t find anyone in the street after 5 p.m. Females can’t go out. It is not a place to live. Everyone is scared and that is why everyone is trying to find a way out," he said. "You go to thrift stores and second-hand stores and everyone is selling everything they have to try to get money to get out of the country."

Zekria told Fox News the situation was "more dangerous" for his people from the Panjshir province, where, he said, "the resistance is fighting against the Taliban."

"That is a reason they bother us more than other ethnicities," he explained.

He added: "No one can get out of the country. You cannot get out. It is like a prison. The Taliban are finding any possible way to keep people inside and not let anyone leave the country."

But despite accounts on the ground, the White House said earlier this month that the Taliban have been "businesslike and professional" in their dealings with U.S. officials on allowing Americans and lawful permanent residents to leave Afghanistan, calling the dialogue "cooperative."

Meanwhile, the White House National Security Council (NSC) acknowledged "an ongoing terrorist threat" to operations in evacuating Americans and Afghan allies, and said it would "not be sharing details of these efforts before people are safely out of the country."

The NSC said the administration will "continue these efforts to facilitate the safe and orderly travel of American citizens, lawful permanent residents, and Afghans who worked for us and wish to leave Afghanistan."

"Because there is an ongoing terrorist threat to operations of this nature, we will not be sharing details of these efforts before people are safely out of the country," the NSC said.

At this point, Zekria said he is hoping for "a miracle."

"I don't know how to describe it," Zekria went on. "I am crying every single day when I see people's lives and this city."

"Since I grew up, all I remember was war, except those last six years in the United States," he said, recalling his home getting hit by a rocket when he was 5 years old. "Luckily we all survived. But even before I was born, there's always war here. In the last 20 years, there was a lot of change in people's lives, but right now, it is something that I can't compare."

He added: "All I care right now is to get out safe with my family. Hopefully that happens. It’s my only dream to help my family to be with me and be safe and sound."