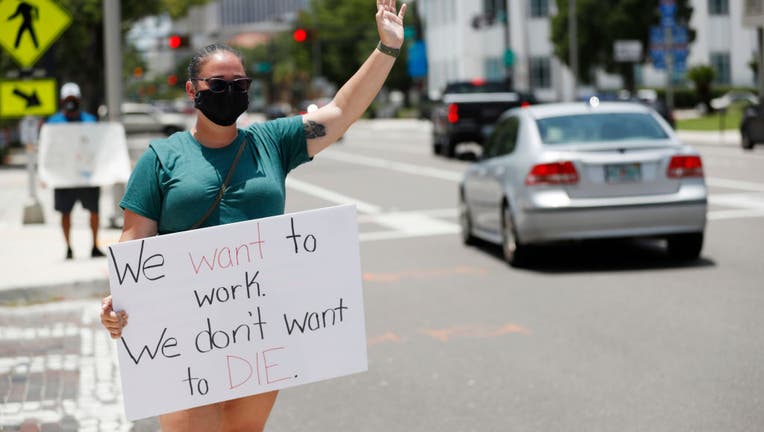 COLUMBUS, Ohio - As pressure mounts for teachers to return to their classrooms this fall, concerns about health risks from the coronavirus are pushing many toward alternatives, including career changes, as others mobilize to delay school reopenings in hard-hit areas.

Among those opting for early retirement is Liza McArdle, a 50-year-old high school language instructor in New Boston, Michigan. She considered the health risks and the looming instructional challenges — trying to teach French and Spanish with a mask obstructing her enunciation, or perhaps a return to virtual learning — and decided it was time to go.

“We’re always expected to give, give, give. You’re a teacher. You have to be there for the kids,” McArdle said. “And now it’s like, ‘Oh, yeah, now you have to put your life on the line for the kids because they need to be in school.’”

Teachers unions have begun pushing back on what they see as unnecessarily aggressive timetables for reopening. The largest unions say the timing should be guided by whether districts have the ability — and funding — to implement protocols and precautions to protect students and teachers, even if that means balking at calls from President Donald Trump to resume in-person instruction.

On Monday, a teachers union filed a lawsuit to block the reopening of schools in Florida, where state officials have ordered school districts to reopen campuses as an option unless local health officials deem that to be unsafe. Educators in several cities have called for the school year to start with remote instruction. Some have joined demonstrations in Arizona, where three teachers sharing a classroom during summer school tested positive for the virus and one died.

“The conversation is being driven by what they want to do for the economy,” said Regina Fuentes, a high school English instructor in Columbus, Ohio, who is entering her 22nd year of teaching. “Teachers and students shouldn’t have to go back to school just to save the economy.”

American Federation of Teachers President Randi Weingarten said her union is focused on advocating for safety in reopening schools, though she isn’t ruling out the possibility of strikes.

A recent analysis from the nonprofit Kaiser Family Foundation estimated nearly one-quarter of the nation’s teachers — nearly 1.5 million — are considered higher-risk for serious illness from the coronavirus because of other health conditions or age.

In a Michigan Education Association survey last month of 15,000-plus educators, 23% indicated they were considering retiring early or leaving the profession because of COVID-19, and 7% said they were actually doing so, according to the union.

RELATED: NJ union head worries about a potential teacher shortage due to COVID-19

Not all educators are concerned. Karen Toenges said she is eager to resume face-to-face lessons with her elementary students in Orlando, Florida, and she disagrees with those contending it isn’t safe. Even as cases spiked in the state, Toenges, 60, she said she hasn’t been wearing a mask and isn’t worried about getting COVID-19.

“It really has become a political issue, which really bothers me,” Toenges said. “But, you know, I’m a very small voice in a very large sea. And so I just go about doing my stuff, getting myself ready, preparing curriculum.”

But school reopening plans could be complicated by any widespread departures of those who are worried about the virus, or who are not eager to return for more distance learning.

Mary Morris, for one, will not be back this fall at Our Lady of Perpetual Help, a Catholic school in Toledo, Ohio, for her 30th year of teaching. Even after a temporary switch to remote learning left her in tears this spring, she had initially signed on for another year.

Then she tried to start planning for kindergarten lessons under virus precautions. Keep kids separated. Don’t share toys. Constantly sanitize all the magnetic letters and the little cubes for counting. It didn’t add up for her.

“Everything that I believe in, I can’t do,” Morris said. “It’s all going to be paper and pencil. And that’s when I sat down and I thought, ‘What am I doing?’”

Other teachers feel they have little choice but to return.

Retiring now isn’t financially feasible for science teacher Deb Waddell, 61, who misses her students but worries because she and her immediate family have health conditions that make them higher risk. She’s hoping to get a virtual teaching role for her rural district in Columbia, Kentucky.

In case not, Waddell said she has spent part of her summer working out adjustments to her classroom routines. She got masks and backup masks, but isn’t thrilled to imagine wearing one all day in a room where the ventilation system is, she figures, older than her. She also ordered goggles to help her avoid touching her eyes, which dry out because of an autoimmune disease.

David Kitzmann, a 61-year-old high school shop teacher in Minnetonka, Minnesota, said that explaining his own higher risk to students could help illustrate what’s at stake and encourage them to keep wearing masks, washing their hands and social distancing.

“I’d hate to see any of my kids die or any my fellow teachers die from this,” he said. “And if we’re smart, we don’t have to.”