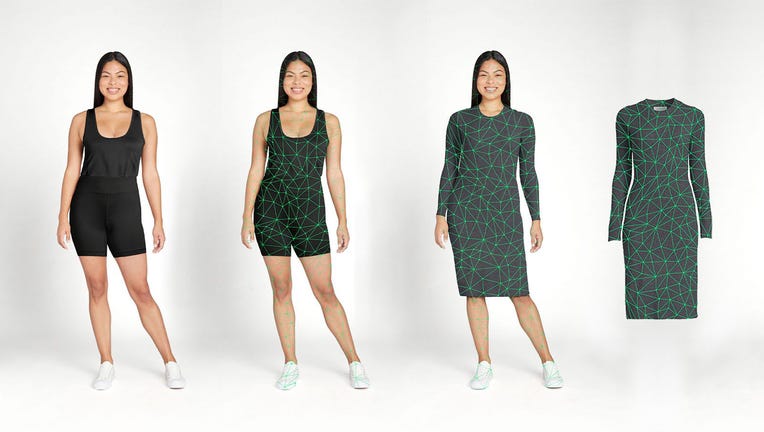 Walmart’s "Be Your Own Model" feature allows customers to upload their own photos to better see how the clothing will look on them using algorithms and "intricate machine learning models," the company said. (Credit: Provided / Walmart)

BENTONVILLE, Ark. - With rising prices on food and gas, customers have been cutting back on discretionary items like clothing. Walmart is hoping to attract more customers to its apparel by taking its virtual fitting room technology to the next level.

On Thursday, the nation’s largest retailer unveiled its new virtual try-on experience that allows online shoppers to "Be Your Own Model," bringing the fitting room to the home. It allows customers to upload their own photos to better see how the clothing will look on them using algorithms and "intricate machine learning models," the company said.

The feature is currently available for Apple’s iOS users in the Walmart app and will be available on Android devices and the Walmart website "in the coming weeks," the Bentonville, Arkansas-based company said.

It is the latest feature announced after Walmart’s acquisition of Zeekit, a virtual try-on platform it announced in 2021. The company launched its first implementation of the technology in March, which allowed shoppers on the Walmart app and Walmart.com to choose their own model based on body shape, height, and skin tone.

Now, the Be Your Own Model feature allows individuals to picture how the clothing would fall on their own bodies.

"Other experiences typically lay a photo of an item on top of another image, making it appear computer-generated. With Be Your Own Model, a customer sees an ultra-realistic simulation with shadows, fabric draping and where clothing falls on their figure in seconds," the company said in a statement.

"For example, a single shirt can come in six different colors, seven different sizes and two sleeve lengths. Our technology captures all the variations and shows how they look uniquely on each individual," it added.

Competitors like Amazon have launched virtual try-on features too, including Amazon, which allows shoppers to see how certain shoes look on their feet before buying.

Walmart said if a clothing item is enabled for virtual try-on, customers will see the "Try It On" button on the item page and have the option to view clothing on themselves ("Be Your Own Model") or another model ("Choose My Model").

To use it, the customer must take a picture of themselves within the Walmart iOS app. Once a photo is saved, the customer will be able to view themselves as the model each time they use the virtual try-on experience, the company said. 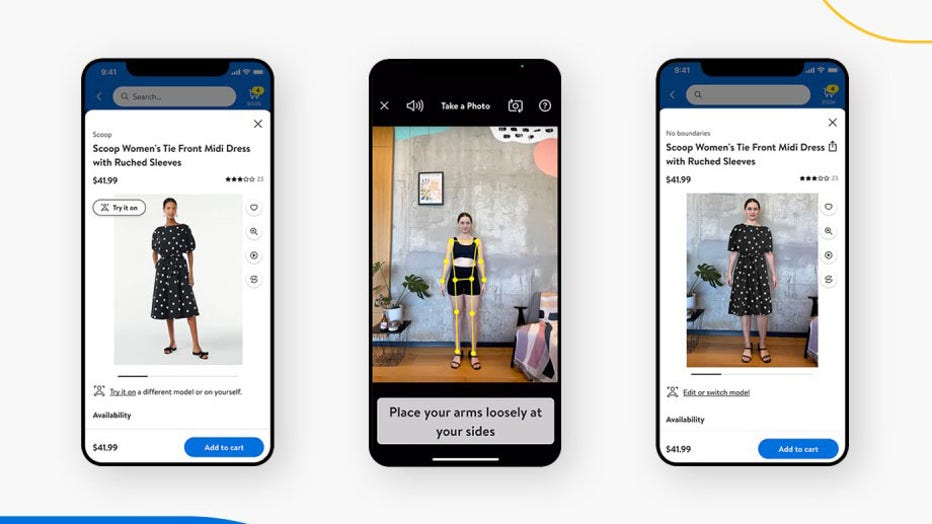 Walmart’s “Be Your Own Model” feature is currently available for Apple’s iOS users in the Walmart app and will be available on Android devices and the Walmart website “in the coming weeks.” (Credit: Provided / Walmart)

Over the summer, Walmart lowered its profit outlook for the second quarter and the full year, saying rising prices on food and gas were forcing shoppers to cut back on non-necessities like clothing.

Despite this, the company said it’s continuing to "make bold moves to establish Walmart as a destination for fashion."

"It started with work over the last few years to expand our assortment of quality, on-trend and accessible apparel and accessories," the company said. "More recently, it includes prioritizing the creation and introduction of innovative shopping experiences that help customers discover the assortment and enable new and existing customers to shop with confidence."