The World Health Organization said more people have been diagnosed with COVID-19 globally in the past two weeks than in the first six months of the pandemic.

During a media briefing on May 3, Dr. Tedros Adhanom Ghebreyesus, WHO director-general, said that India and Brazil account for more than half of last week’s cases.

"More cases of COVID-19 have been reported globally in the past two weeks than during the first six months of the pandemic. India and Brazil account for more than half of last week’s cases, but there are many other countries all over the world that face a very fragile situation," Tedros said.

The global health organization is attempting to alleviate each country’s strained medical infrastructure by providing much-needed supplies such as oxygen, lab supplies and mobile field hospitals.

The WHO is also providing advice for people who are caring for a person suffering from COVID-19 but are unable to find an open hospital bed.

"For the second successive week, the number of COVID-19 cases globally remains at the highest levels since the beginning of the pandemic with over 5.7 million new weekly cases, following nine consecutive weeks of increases. New deaths continue to increase for the seventh consecutive week, with over 93,000 deaths. The South-East Asia Region continues to report marked increases in both case and death incidences," the WHO said in a May 4 epidemiological update.

The organization said that people around the world should continue to social distance, wear a mask and wash their hands despite a widespread rollout of COVID-19 vaccinations.

"What’s happening in India and Brazil could happen elsewhere unless we all take these public health precautions the WHO has been calling for since the beginning of the pandemic," Tedros said. 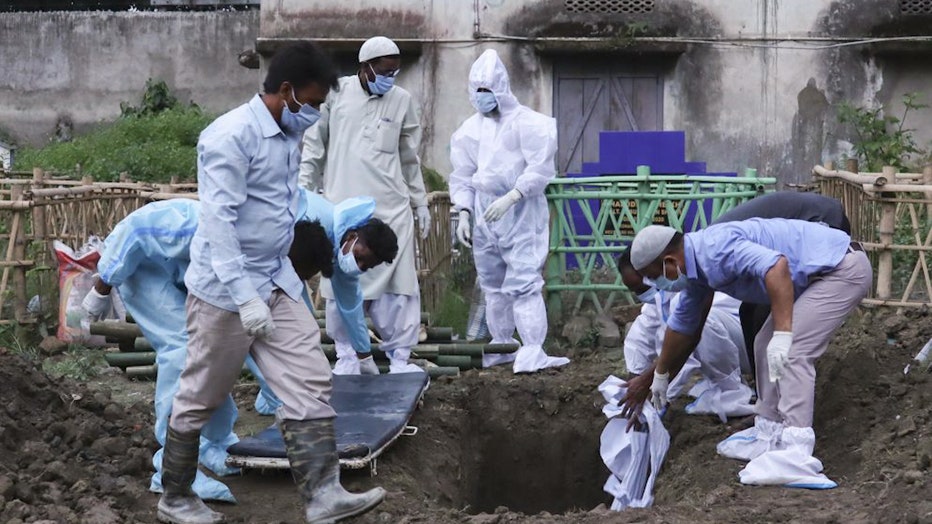 FILE - Family members with municipal workers bury a body of a person who died of COVID-19 at a graveyard in Guwahati, India on May 3, 2021.

India's official count of coronavirus cases surpassed 20 million Tuesday, nearly doubling in the past three months, while deaths officially have passed 220,000. Staggering as those numbers are, the true figures are believed to be far higher, the undercount an apparent reflection of the troubles in the health care system.

The country has witnessed scenes of people dying outside overwhelmed hospitals and funeral pyres lighting up the night sky.

Infections have surged in India since February in a disastrous turn blamed on more contagious variants of the virus as well as government decisions to allow massive crowds to gather for Hindu religious festivals and political rallies before state elections.

The reported caseload is second only to that of the U.S., which has one-fourth the population of India but has recorded over 32 million confirmed infections. The U.S. has also reported more than 2 1/2 times as many deaths as India, at close to 580,000.

Residents of Delhi, India, lined up to get oxygen tanks refilled on April 30, as cases of COVID-19 soared across the country.

In Brazil, a total of 14.8 million cases have been reported and a total of 408,622 deaths as of May 4, according to data collected by Johns Hopkins University.

Toward the end of April, intensive care units across Brazil were at or near capacity amid a crush of COVID-19 patients, and sedatives needed to intubate patients dwindled. The nation’s biggest cemetery had so many corpses to bury that gravediggers worked hours past sundown.

But Brazil has stepped back from the edge — at least for now — as burial and hospital services no longer face collapse. It has ceased to be the virus’ global epicenter, as its death toll ebbed and was overtaken by India’s surge. Experts warn, however, that the situation remains precarious, and caution is warranted.

The number of states with ICU capacity above 90% has slipped to 10, from 17 a month ago, according to data from the state-run Fiocruz medical research institute. And nighttime burials at Vila Formosa and three other cemeteries in Sao Paulo were suspended Thursday, after two weeks of declining deaths.

RELATED: FDA expected to OK Pfizer vaccine for teens by next week

That comes as cold comfort in a country where some 2,500 people died every day over the past week, more than triple the number in the U.S. Brazil surpassed the grim milestone of 400,000 confirmed deaths on April 29 — a number considered by experts to be an undercount, in part because lack of testing meant many cases were overlooked, especially early in the pandemic.