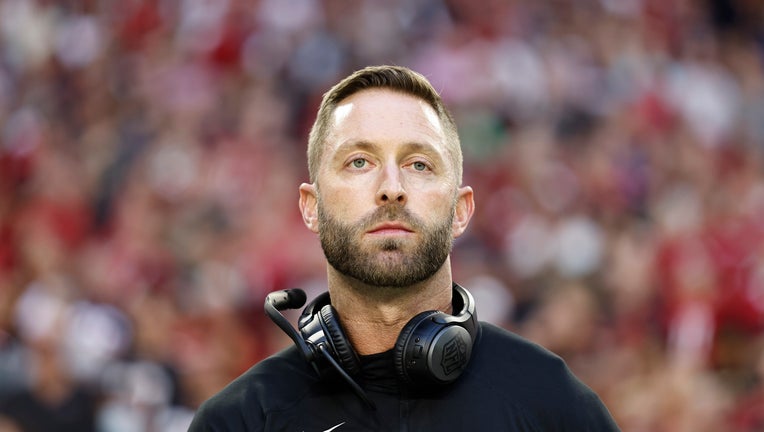 GLENDALE, ARIZONA - OCTOBER 20: Arizona Cardinals head coach Kliff Kingsbury looks on during the national anthem prior to an NFL football game between the Arizona Cardinals and the New Orleans Saints at State Farm Stadium on October 20, 2022 in Glend

TEMPE, Ariz. (AP) — The Arizona Cardinals have tried a lot of things to shake their extended funk.

Now the attention turns squarely to fourth-year coach Kliff Kingsbury. If he can’t get things turned around before the end of the year, it’s fair to wonder if he’ll get to stay in the desert for a fifth season.

Kingsbury was as calm and collected as ever Monday, even though the Cardinals (3-6) have lost four of their last five games. They fell to the Seahawks 31-21 on Sunday, losing at home for the eighth time in nine games.

"You can never knock the effort when you watch our team’s play," Kingsbury said. "They’re giving everything they’ve got. But at critical times, critical errors continue to show up. That’s something at some point we’ve got to figure out before it’s too late.

MORE: Cardinals running out of time to make move in NFC West

Veteran right tackle Kelvin Beachum said he still hasn’t given up hope that the Cardinals can make a run in the tightly bunched NFC playoff race, where mediocre football has been contagious.

The frustrating thing about these Cardinals is everything is working at times. Kyler Murray made some big plays on Sunday, throwing for two touchdowns and running for 60 yards. Three-time All-Pro receiver DeAndre Hopkins has been hugely productive since his return from a six-game suspension.

They’ve been competitive in almost all of their losses. Five of the six have been by 10 points or less.

Simply put, the Cardinals have gained a reputation for being a sloppy, undisciplined team.

They were called for 12 penalties Sunday and made several other mistakes on simple plays, including a pair of botched snaps from Billy Price, who is playing for the injured Rodney Hudson.

"For whatever reason, we have not been in sync with that stuff all season," Kingsbury said. "It starts with coaches, and then players have to take ownership and responsibility for that. If we can’t stay onside, snap the ball and execute routine plays, it’s going to be tough against quality teams and that’s what ended up getting us."

Second-year LB Zaven Collins had the play of the game for the Cardinals, jumping in front of a pass by Geno Smith, tipping it to himself and running 30 yards for a touchdown and a 14-10 lead in the third quarter.

It’s exactly the kind of athletic play the Cardinals envisioned two years ago when he was selected with the No. 16 overall pick out of Tulsa.

His rookie year was a bit of a struggle, but he’s made big strides in his second season. It looks like he’ll be a key contributor in the middle of the defense for years to come.

The Cardinals added WR Robbie Anderson last month in a trade with the Panthers, hoping that the veteran receiver would give the offense another big-play option.

It hasn’t worked out so far.

Anderson has caught just one pass for minus-4 yards. He also dropped a critical third-down throw in Sunday’s loss to the Seahawks. Anderson was a 1,000-yard receiver just two seasons ago, but it’s hard to see how he fits with the Cardinals.

The interior of the Cardinals’ offensive line is beat up. LG Justin Pugh is out for the season, Hudson has missed the past several games and Kingsbury believes RG Will Hernandez is out at least a week with a chest injury.

The Cardinals hope one of their key reserves — G Max Garcia — can return this week.

"Guys are competing hard," Kingsbury said. "We’ve got to get some things cleaned up, particularly the pre-snap stuff, some of those snaps. But they’re still giving us opportunities, just got to find a way to be cleaner."

The Cardinals play their second game of a three-game stretch against NFC West opponents when they travel to Los Angeles to face the Rams on Sunday.