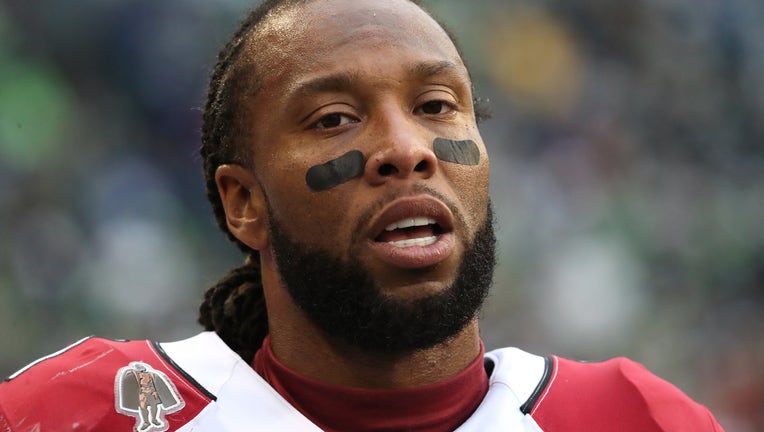 SEATTLE, WASHINGTON - DECEMBER 22: Larry Fitzgerald #11 of the Arizona Cardinals reacts in the second quarter against the Seattle Seahawks during their game at CenturyLink Field on December 22, 2019 in Seattle, Washington. (Photo by Abbie Parr/Getty

He went through what seemed like half the Cleveland Browns sideline, stopping to share a laugh or a pat on the back and posing for a few photos.

When Fitzgerald finally found himself alone, he trotted off the field as he always does. No celebrations, no looks around the stadium, no saving a football or a jersey.

If this was the home finale of his storied career, Fitzgerald didn't treat it any differently than any other game.

“I told you, man, it's a job. I love what I do, but when it's over, it's over,” Fitzgerald said following Arizona's 38-24 win over the Browns on Sunday. “I'm not going to lose any sleep and I've got a lot of great things ahead of me.”

Fitzgerald was feted in Arizona's final home game a year ago amid speculation he might hang up the cleats for good. The Cardinals played video tributes to him during timeouts dubbed the “Twelve Days of Fitzmas" and fans serenaded him with chants of “Larry!” throughout the game.

Turns out, it wasn't Fitzgerald's finale.

Excited about playing in first-year coach Kliff Kingsbury's spread-out offense, Fitzgerald opted to return for a 16th season and continued to be productive at 36, leading the Cardinals with 69 catches for 711 yards and three touchdowns.

As a difficult season in the desert has drawn closer to the finish, the speculation about Fitzgerald's future has ratcheted up again.

As he did a year ago, Fitzgerald put no time frame for making a decision, gave no indication if he's leaning one way or another.

If he does call it a career, Fitzgerald will leave as one of the most productive and respected players in NFL history.

“He's the gold standard of what an NFL player should be,” Cardinals guard Justin Pugh said. “He leads by example, he leads by work ethic, he's the GOAT for reason.”

Fitzgerald will likely be a first-ballot Hall of Famer when he becomes eligible and find his No. 11 in Arizona's ring of honor after putting together one of the greatest careers by a receiver in NFL history.

A third-round pick out of Pittsburgh in 2004, Fitzgerald has spent his entire career with the Cardinals, becoming a Valley of the Sun sports icon through his tireless work ethic, production and connection to the community.

The respect comes from the professionalism Fitzgerald shows on the field and the countless hours he spends working with charities and the rest of the community.

“Larry is a tremendous person and an exceptional player and I feel very fortunate that I was with him 11 years and I saw him work every day,” said Browns coach Freddie Kitchens, a Cardinals assistant from 2007-17. “I saw him grind every day. I saw him get himself ready to play during training camp and show up every Sunday and play. I don’t know the last time he has missed a game. Just impeccable in everything he does."

Fitzgerald caught a 16-yard pass on Arizona's opening drive against Cleveland to extend his streak of consecutive games with a catch to 241, second only to Rice's 274 straight. Fitzgerald then caught two more passes on the drive, which Kenyan Drake finished with the first of his four touchdowns on an option from quarterback Kyler Murray.

Fitzgerald finished with five catches for 42 yards, nabbing one pass by reaching around a defensive back who seemed to have played him perfectly. Fitzgerald is known for making acrobatic one-handed catches, and almost added to the list when he tipped the ball with one hand and nearly came down with a spectacular grab in the second quarter.

“I really wanted that one bad,” Fitzgerald said. “I had it and his helmet kind of nudged my arm and I couldn't hold onto it. I really was frustrated."

The Cardinals close out the season with road games against the Seattle Seahawks and the Los Angeles Rams, so Sunday's game would be his last in Arizona if he does call it a career. An avid golfer and traveler, Fitzgerald will likely be in no rush to make a decision once the season does end.

There's little question which direction his teammates want him to take.