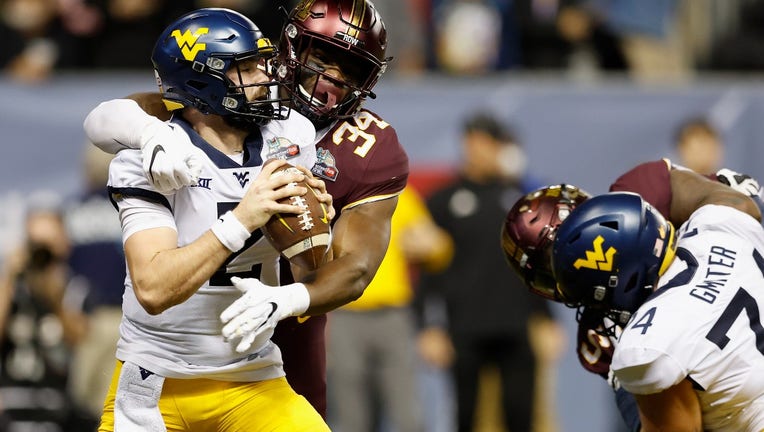 Quarterback Jarret Doege #2 of the West Virginia Mountaineers is sacked by defensive lineman Boye Mafe #34 of the Minnesota Golden Gophers during the first half of the Guaranteed Rate Bowl at Chase Field on December 28, 2021 in Phoenix, Arizona. ((Photo by Christian Petersen/Getty Images))

MINNEAPOLIS - The University of Minnesota football team beat West Virginia 18-6 in the Guaranteed Rate Bowl Tuesday night at Chase Field as the Gophers finished the 2021 season 9-4.

They did it in the trenches, with a dominant defensive effort and pounding rushing attack. Ky Thomas had 21 carries for 144 yards and a touchdown, Mar’Keise Irving added 19 carries for 129 yards and 380-pound offensive tackle Daniel Faalele scored his first career touchdown.

The Minnesota defense sacked Jarret Doege five times, with Esezi Otomewo getting two, and Boye Mafe, Tyler Nubin and Jah Joyner getting one each. The Gophers limited West Virginia to 206 total yards, 66 rushing yards, 4-of-13 on third downs and 2.7 yards per carry.

Defensive coordinator Joe Rossi, who got a contract extension during bowl game preparation, had the Gophers' defense ready to play from the opening kickoff.

"Joe Rossi is one of the best defensive coaches in the country. We’re very lucky to have him, very blessed to have him and the entire defensive staff. They get all the credit," Gophers coach PJ Fleck said after the win. "You give coach Rossi three weeks to prepare for somebody, he’s really tough."

Both teams survived tough conditions at Chase Field as they opened the roof during a rain storm moments before kickoff for a pregame paratrooper and fireworks show. Several players had trouble keeping their footing throughout the game, and the Gophers lost center John Michael Schmitz to a foot/ankle injury in the first half.

Faalele scored from two yards out, and Brock Annexstad added a two-point conversion to give the Gophers an 8-0 lead in the second quarter. Faalele was playing his final game with Minnesota, likely headed to the NFL Draft in 2022. Minnesota hasn't had an offensive lineman selected since Greg Eslinger and Mark Setterstrom in 2006.

Faalele lined up as the fullback on the  touchdown, a play that mirrored one he scored on in the 2019 Spring Game.

"He’s 400 pounds. Once that thing gets moving forward, it’s hard to be able to stop that thing. We ran the ball with him a few years ago in the Spring Game, we threw it last year. Decided to run it this time, no hesitation," Fleck said. "Daniel is going to hopefully go to the National Football League, hopefully be a first round draft pick. He played his heart out tonight. Wait until you see his film, he dominated the game."

The Mountaineers scored their only points of the night on the next drive, with Jarret Doege scoring a 1-yard touchdown.

Thomas scored from five yards out, after taking a 50-run yard run inside the 10-yard line, to give Minnesota a 15-6 lead at the half. Matthew Trickett added a 49-yard field goal in the third quarter, and the defense did the rest. The Gophers collected 358 total yards, and Thomas and Irving each ran for over 100 yards for the third time this season as they piled up 249 rushing yards. Minnesota averaged 4.9 yards per carry.

Tanner Morgan finished 8-of-13 for 109 yards passing. Daniel Jackson and Dylan Wright had a combined five catches for 77 yards. Chris Autman-Bell had one catch for 16 yards. Thomas was named the Offensive MVP after the game, and Nubin was named the Defensive MVP after a team-high eight tackles, a sack, tackle for loss and a pass break-up.

Minnesota won nine games in a season for the fourth time in the last 100 years, two of which have no happened the last three seasons under Fleck. The Gophers won their fifth straight bowl game, third straight under Fleck, and Fleck won his 35th game at Minnesota. The 2021 senior class helped Fleck go 30-16 over the last four seasons.