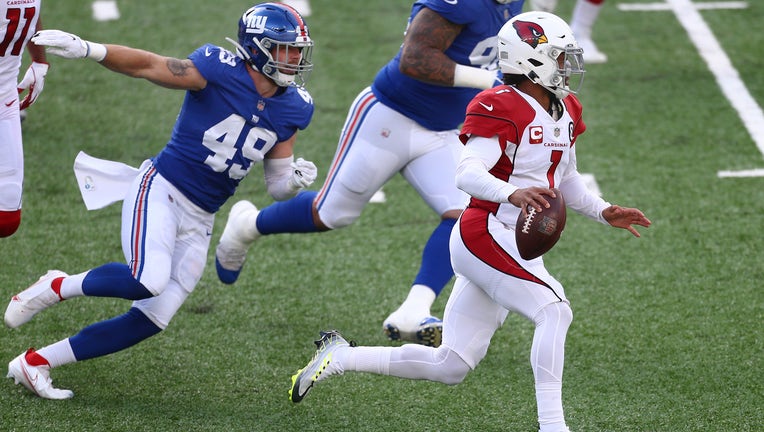 EAST RUTHERFORD, N.J. - Haason Reddick had a franchise-record five sacks and three forced fumbles as the Arizona Cardinals spoiled the return of Giants quarterback Daniel Jones and moved back into an NFC playoff spot with a 26-7 victory over New York on Sunday.

Kyler Murray added a touchdown pass as Arizona (7-6) snapped a three-game skid and ended a four-game winning streak that had moved the Giants (5-8) to the top of the NFC East.

Mike Nugent came off the practice squad and added his first four field goals in more than a year, and Kenyan Drake scored on a 1-yard dive as Arizona won for only the second time in six games.

The Cardinals finished with eight sacks. Reddick broke the team mark of 4 1/2 by Curtis Greer on Dec. 18, 1983 against the Eagles

While Murray was the catalyst of an offense that produced 390 total yards, the defense and special teams made major contributions. The Cardinals limited New York to 159 yards in making Jones’ return from a one-game absence with a hamstring injury miserable.

Jones finished 11 of 21 for 127 yards and two fumbles, including one lost on the opening series. He was sacked six times before leaving late for Colt McCoy.

New York’s only score game on a 1-yard run by Dion Lewis on its opening possession of the second half, cutting the deficit to 20-7.

The Cardinals capitalized on great field position in taking a 13-0 halftime lead against the offensively inept Giants. It could have been more.

Murray threw a 7-yard pass to Arnold to cap a 21-yard possession set up by a lost fumble by Lewis on a kickoff return.

Nugent, subbing for the injured Zane Gonzalez, kicked field goals of 34 and 37 earlier. The first one was set up by a 24-yard punt return by Christian Kirk to the Giants 38.

Drake scored to extend the lead to 20-0 on the opening drive of the second half.

New York’s defense had forced the Cardinals to turn over the ball on downs after a sack. But a forced fumble and return by former Giant Markus Golden gave Arizona a first-and-goal at the New York 9.

Veteran Cardinals receiver Larry Fitzgerald was back after missing two games with COVID-19. He had two catches to extend his streak of consecutive games with a catch to 254.

Arizona: DL Gordon Phillips (hamstring) was knocked out of the game early. LG Justin Pugh (calf) and RT Kelvin Beachum (back) were injured, but there was no update on their status.

New York: Jones was limping by the end of the game. McCoy, who started in last week’s win over Seattle, replaced him late in the fourth quarter and was treated as badly as Jones.

Cardinals: head back to Arizona and will play another NFC East team, the Eagles,

Giants: stay home and play host to the Cleveland Browns on Sunday night in a flexed game.