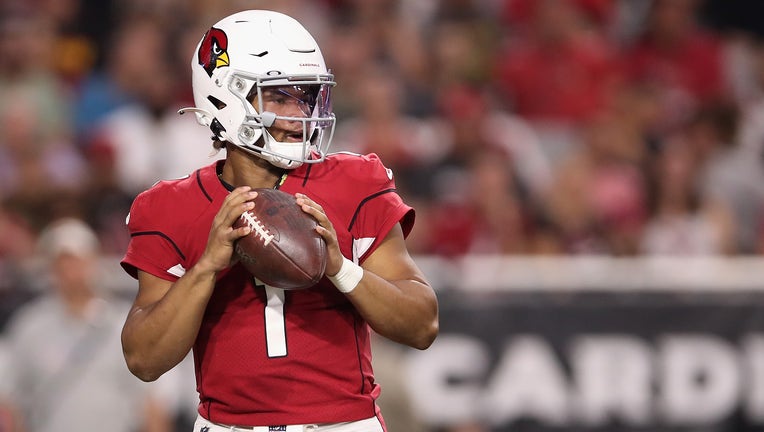 GLENDALE, ARIZONA - AUGUST 15: Quarterback Kyler Murray #1 of the Arizona Cardinals drops back to pass during the first half of the NFL preseason game against the Oakland Raiders at State Farm Stadium on August 15, 2019 in Glendale, Arizona. (Photo b

Murray, the first overall pick in this year's NFL draft who looked sharp in his debut last Thursday against the Los Angeles Chargers, finished 3 of 8 for 12 yards. He also ran once for 4 yards, and the Cardinals went three-and-out on two of his four series.

Raiders backup Mike Glennon completed 11 of 14 passes for 175 yards and a pair of touchdowns, and the Oakland defense tackled Murray in the end zone for a safety to lead the Raiders to their second preseason win.

Derek Carr, the Raiders' No. 1 quarterback, played one series and led a touchdown drive, going 2 for 2 for 40 yards in his preseason debut. Carr threw 13 yards to Ryan Grant for a touchdown on the game's opening drive, and former Cardinal Glennon picked up where Carr left off.

Glennon engineered three scoring drives, one ending in a deep pass over the middle to a wide-open Rico Gafford, who got free on what appeared to a busted coverage. He scored a 53-yard touchdown with 2:40 left in the first quarter.

The Cardinals couldn't get out of their own way with Murray guiding the No. 1 offense. Six penalties for 45 yards while Murray was in the game didn't help, and Murray himself was flagged twice for false starts. He was sacked by the Raiders' Brandon Marshall in the second quarter, and two plays later went down in the end zone for a safety credited to Oakland's Lamarcus Joyner.

Backup Brett Hundley came on for Murray late in the second quarter, and after a pass interference penalty against the Raiders, threw a 40-yard touchdown pass to Trent Sherfield.

Zane Gonzalez kicked field goals of 22 and 45 yards for the Cardinals. Arizona scored a pair of late touchdowns to close the gap.

A.B. IN THE HOUSE

Raiders star wide receiver Antonio Brown came out for pregame warmups in full uniform and pads — and a helmet — and caught passes. He didn't play in the game.

Brown lost his grievance with the NFL on Monday over his use of an old helmet that is no longer certified as safe to use for practice or play. He then reached out on social media, offering to trade a signed helmet for a model he prefers that he is legally allowed to use.

Brown has been limited in training camp with injuries to his feet that reportedly came from frostbite suffered while getting cryotherapy treatment.

Hundley hit Sherfield for a touchdown for the second time in two preseason games. The first was a 22-yard strike last Thursday, also in the second quarter.

The Cardinals totaled 14 penalties for 108 yards and allowed 123 rushing yards a week after giving up 179 to the Chargers.

Cardinals: CB Robert Alford, a projected starter, didn't play. No reason was given for his absence during the game.

Raiders: vs. Green Bay next Thursday.

Cardinals: at Minnesota on Aug. 24.