At least 12 killed, dozens of others wounded across Chicago in Father’s Day weekend shootings

CHICAGO - Chicago saw its highest number of gun violence victims in a single weekend this year with 104 people shot across the city from Friday evening to Monday morning, 15 of them fatally. Five of those killed were minors.

The weekend saw more shooting victims but less fatalities than the last weekend of May, when 85 people were shot, 24 of them fatally — Chicago’s most deadly weekend in years.

The latest child fatality happened early Monday in Austin on the West Side.

Two boys, 15 and 16, were walking in an alley at 12:18 a.m. in the 4700 block of West Superior Street when someone fired at them, possibly from a gray sedan, according to Chicago police. The 15-year-old was shot in his leg, chest and abdomen. He was taken to Stroger Hospital and pronounced dead. The other boy, 16, was hit in the ankle and also taken to Stroger. He was in fair condition.

Saturday night, a 13-year-old girl was killed and two other teens were wounded in Austin on the West Side.

The girl was inside a home about 8:30 p.m. in the 1000 block of North LeClaire Avenue when the shots were fired, and she was struck in the neck, police said. Amaria J. Jones was taken to Stroger, where she was pronounced dead, authorities said.

A 3-year-old was shot and killed in Chicago's Austin neighborhood on the South Side on Saturday night. He was with his father at the time.

Two hours earlier, a 3-year-old boy was fatally wounded when someone opened fire at his father while they were driving in Austin.

The toddler, identified as Mekhi James, was struck in the back about 6:25 p.m. when someone in a blue Honda pulled behind the black SUV the boy’s 27-year-old father was driving in the 600 block of North Central Avenue and fired several rounds, authorities said.

A police source said the father was believed to be the intended target of the shooting.

The father drove the boy to West Suburban Medical Center in Oak Park, police said, but the boy was pronounced dead shortly after arriving. The father was also treated for a graze wound to the abdomen. 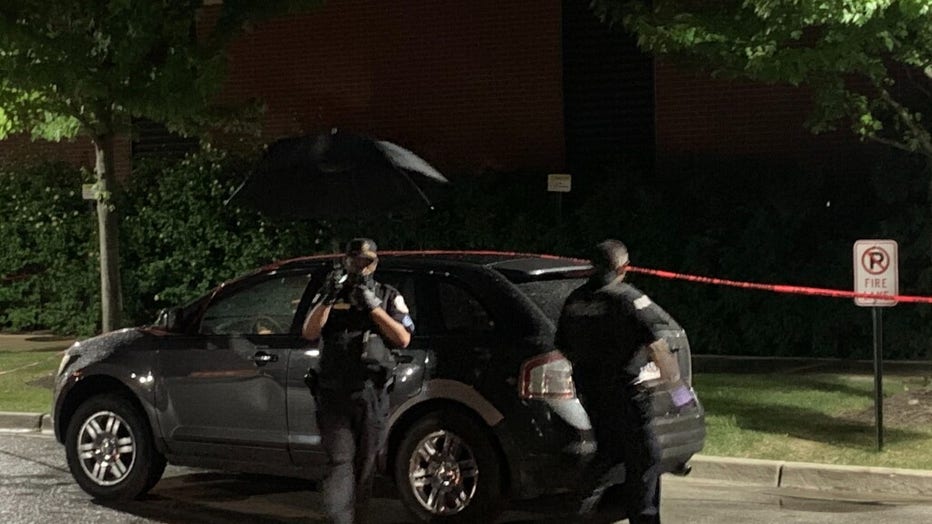 Police investigate after a 3-year-old boy was killed and a man was wounded June 20, 2020, in Austin. | Sam Kelly/Sun-Times

Two teenage boys were killed just over an hour before that in South Chicago.

Jasean Francis, 17, and the 16-year-old were in an alley about 5:10 p.m. in the 7900 block of South Luella Avenue when a male suspect approached them and fired shots, authorities said. Francis was shot in the back, chest and hand while the 16-year-old was shot in the back and side. Both were taken to the University of Chicago Medical Center, where they were pronounced dead.

The 41-year-old was on the street at 4:26 a.m. in the 3800 block of West Harrison Street when someone shot him in the face, according to police. He died about an hour later at Stroger. A person of interest was taken into custody after people near the scene identified him as the possible shooter.

Minutes earlier, another man was killed in East Garfield Park.

The 30-year-old was walking at 4:18 a.m. in the 100 block of South Washtenaw Avenue when someone in the alley fired shots, according to police. He was hit in the neck and taken to Stroger, where he died.

Early Sunday, a man was killed and three others were wounded in a shooting in Humboldt Park.

The men were arguing with a group about 12:04 a.m. in the 2600 block of West Potomac Avenue when they were shot, authorities said. Alexis Perez, 41, was shot multiple times and was pronounced dead on the scene. Two other men, 23 and 21, both went to Stroger in good condition. The older man was shot in the knee and hip while the younger man was shot in both legs. A fourth man, 34, was shot in his legs and arms. He was treated and released from Mt. Sinai Hospital.

They were shot about 7:30 p.m. in the 800 block of North Springfield Avenue, authorities said. Toby Boens, 22, was struck in the chest and pronounced dead at Stroger.

A 34-year-old man was hit in the arm and abdomen and was taken to the same hospital in critical condition, police said.

Ten minutes earlier, a man was shot to death in West Rogers Park on the North Side.

Gary Tinder, 20, was walking about 7:20 p.m. in the 6200 block of North Troy Street when someone approached and shot him in the abdomen, authorities said. He was taken to St. Francis Hospital in Evanston, where he was pronounced dead.

About two hours before that, a man was fatally shot during an argument in Gage Park on the Southwest Side.

Alberto Fayre-Estrada was arguing with someone about 5:15 p.m. in an alley in the 5500 block of South Fairfield Avenue, authorities said.The other person pulled out a gun and shot him in the abdomen. He was taken to Mount Sinai Hospital in serious condition and pronounced dead at 11:56 p.m. He lived in Gage Park.

Two men were shot, one of them fatally, in another attack Saturday evening in Austin.

Officers responding to reports of a person shot at 7:46 p.m. in the 200 block of North Central Avenue found the two men on the sidewalk, authorities said. Alonzo X. Robinson, 27, was shot in the torso and taken to West Suburban Medical Center, where he was pronounced dead. The other man, 32, was hit in the left foot and taken to the same hospital in good condition.

Less than an hour before that, a man was fatally shot and another was injured in Logan Square on the Northwest Side.

The men, 23 and 24, were outside about 7 p.m. in the 1900 block of North Western Avenue when a group of males approached them yelling gang slogans, according to police. The group asked what gang the men were with, and a fight ensued. During the altercation, one of the males pulled out a gun and fired shots.

The 23-year-old man was struck in the neck and pronounced dead on the scene, police said. The 24-year-old was hit in the arm and was taken to Saints Mary and Elizabeth Medical Center in good condition.

A 33-year-old man was killed Friday night in Garfield Park on the West Side.

Almos Collum was driving about 10:25 p.m. in the 4100 block of West Congress Parkway when a black SUV approached and someone inside fired into his vehicle, authorities said. He was shot multiple times and taken to Stroger, where he died at 10:49 p.m. He lived in Austin.

The weekend’s earliest homicide happened less than an hour earlier blocks away in Austin.

Three men were outside about 9:52 p.m. in the 4800 block of West Gladys Avenue when someone in a passing vehicle unleashed gunfire, police said.

Johnny Teajue, 33, was shot in the neck and taken to Stroger, where he was pronounced dead, according to police and the medical examiner’s office. He lived in Washington Park.

The group was at a large gathering on the street at 2:45 a.m. on South Central Park Boulevard when someone fired shots from a passing vehicle, according to police. The girl was hit in the abdomen and taken to Stroger in critical condition. A 24-year-old woman shot in the leg and a 32-year-old man shot in the arm were taken to the same hospital in good condition.

Two other men, 30 and 31, were each shot in the leg and went to Mt. Sinai Hospital on their own in good condition, police said.

On Sunday night, a 12-year-old girl was grazed in a shooting that also wounded a man in Burnside.

She was outside with a group of people about 9:50 p.m. on East 90th Place when someone in a black vehicle fired shots, police said. The girl was grazed on the leg and taken to Trinity Hospital. A 21-year-old man was shot in the hip and taken to the University of Chicago Medical Center. Both were in good condition.

A teenage boy was shot early Sunday in Humboldt Park on the West Side.

The 17-year-old was in a vehicle with three other people at 12:36 a.m. on West Hirsch Street when someone walked up and started shooting, according to police. The vehicle took off and hit several parked cars. The four occupants got out, at which point the suspect shot the teen in the abdomen. He was taken to Stroger in fair condition.

Another teen boy was grazed by a bullet early Saturday in Little Italy.

The 17-year-old was driving about 12:45 a.m. on South Loomis Street when someone in a gold sedan fired shots, police said. He was grazed in the ribcage and taken to Mt. Sinai Hospital in good condition.

A few minutes later, a 64-year-old woman was shot inside her home in Humboldt Park on the West Side.

She was inside at 12:49 a.m. in the 1000 block of North Lawndale Avenue when bullets came through her window, according to police. The woman was hit in the arm and taken to Norwegian American Hospital in fair condition. She did not appear to be the shooter’s intended target.

She was with a group of people about 6:30 p.m. in the 7400 block of South Phillips Avenue when a light-colored SUV pulled up and someone inside opened fire, police said. She was shot in the arm, and her condition was stabilized at the University of Chicago Medical Center.

At least 66 other people were hurt in shootings throughout Chicago between 5 p.m. Friday and 5 a.m. Monday.

Last weekend’s gun violence killed two people and wounded 31 others across the city.