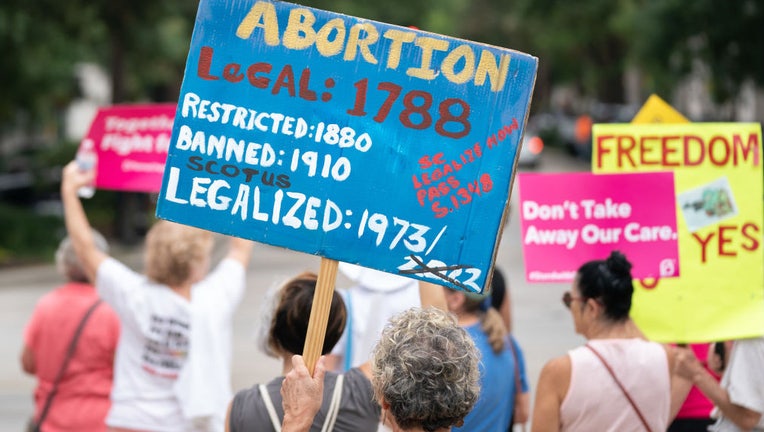 COLUMBIA, S.C. - Abortion laws in South Carolina almost certainly won't get more restrictive, after Republicans in the General Assembly could not agree on a total ban on the procedure during a special legislative session Tuesday.

South Carolina was for decades at the forefront of more restrictive abortion laws that challenged Roe v. Wade even before the landmark case was overturned by the U.S. Supreme Court this summer. The state requires ultrasounds, parental consent and 24-hour waiting periods before abortions.

But when faced with the real-world consequences of bans that have played out in the other states, some Republicans in South Carolina paused at the brink.

A House vote Tuesday likely killed the bill for this session. House Republicans insisted on a full ban on abortions with exceptions only for pregnancies caused by rape or incest, or if the life of the mother was threatened.

They said the version passed by the state Senate earlier this month is too watered-down. The Senate kept the state's current ban on abortions after cardiac activity is present in a fetus, which is usually around six weeks. It did cut the amount of time victims of rape or incest can seek abortions to 12 weeks instead of 20 weeks.

But even that version is not in effect. The South Carolina Supreme Court has suspended enforcement of the law as it decides if it violates the right to privacy in the state constitution, leaving an older 20-week abortion ban in place.

Rep. John McCravy, the Republican sponsor of the House bill, said he was stunned to see support for a total ban evaporate after Roe v. Wade was overturned.

"We thought those that ran on pro-life would be pro-life, and they would stick to their ideological positions," McCravy said.
Tuesday's 95-11 vote in the House — with almost all the chamber’s Democrats joining most of the Republicans — didn't entirely close the door on changing the abortion laws before a new set of House members are elected in November.

The Senate could come back, insist on its version, and a group of three lawmakers from each chamber would work on a compromise between the Senate bill and the House version.

But Republican Senate President Thomas Alexander said the vote made passing a bill in the special session "almost impossible" because senators showed earlier this month there aren’t enough votes in the 46-member chamber for a ban earlier than six weeks.

"I support a stronger pro-life bill. But once we realized it was not possible to pass, our primary concern became to protect the most lives of the unborn possible by strengthening the fetal heartbeat law that is in current legal jeopardy," Alexander said in a statement.

The Senate bill also required DNA from aborted fetuses in pregnancies caused by rape to be collected for police. It also clarifies protections for doctors who order an abortion if it is determined a fetus cannot live outside the womb.

For lawmakers and groups that have spent decades trying to end all abortions, it is a frustrating end to what looked so promising after leaders in the Republican-dominated General Assembly quickly called for a special session once the draft opinion leaked that the U.S. Supreme Court was ready to let states to decide the abortion issue themselves.

But the effort stalled in the Senate, where the three Republican women and two of their GOP colleagues stopped a near-total ban.

"Yes, I’m pro-life. I’m also pro-life for the mother, the life she has with her children who are already born. I care about the children who are forced into adulthood, made up by a Legislature full of men so they can feel good about it," said Republican Sen. Katrina Shealy during the debate earlier this month.

Tuesday's vote could have impact in the governor's race. Republican incumbent Henry McMaster, facing reelection in six weeks, has said he wants to see no abortions in the state. Republicans don't have a two-thirds majority to override a veto, so Democratic challenger Joe Cunningham has campaigned that he alone can prevent any further restrictions with his veto pen if he wins in November.

Democratic House Minority Leader Todd Rutherford said it wasn't time to celebrate, because many women don't know they are pregnant at just six weeks and he expects to see women take desperate measures once a choice is taken from them.

But Rutherford said he hopes Republicans keep promises made during the debate to do more to help access to birth control, health care for pregnant women and their babies and education for the children born after the U.S. Supreme Court decision.