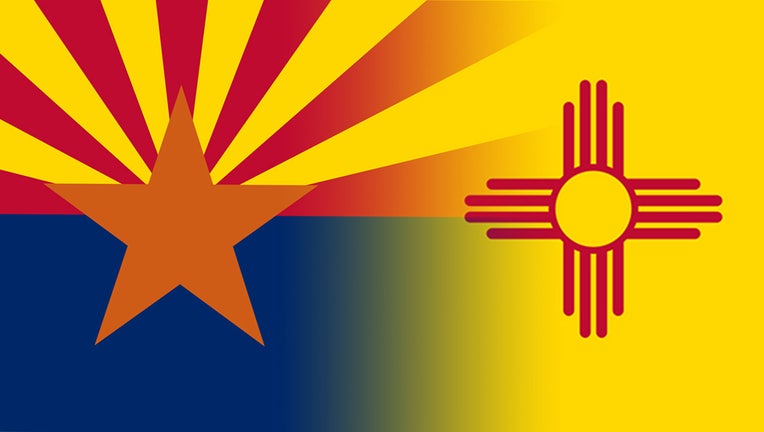 SANTA FE, N.M. - Protesters used a rope and chain to topple a monument in New Mexico's capital city as activists faced off with authorities along the U.S.-Mexico border in neighboring Arizona as part of demonstrations meant to mark Indigenous Peoples Day.

Officers with the Arizona Department of Public Safety responded the morning of Oct. 12 after protesters blocked traffic near an immigration checkpoint to voice concerns about border wall construction and activity on O’odham ancestral land in southern Arizona. Authorities reported that a dozen people were taken into custody after a brief confrontation.

“Everyday is Indigenous People’s Day, and we are here to remind the world that this is, was, and always will be Indigenous O’odham land, and we will do what is necessary to protect it,” read a statement from the O’odham Anti Border Collective and Defend O’odham Jewed, which means “homelands” in the O’odham language.

In Santa Fe, the crowd cheered as the top stone of the historic marker came crashing down. A point of contention for years, Native American activists had been calling for the removal of the obelisk due to its reference to the “heroes” who died in battle with “savage Indians.”

Handmade signs read “It matters who we elevate and celebrate” and “It’s time to stop celebrating conquest.”

Other events across the country Monday focused on the history and contributions of Native Americans, including virtual runs, comedy and music showcases, panel discussions on tribal sovereignty, and the effects of a recent U.S. Supreme Court decision that determined that a large swath of eastern Oklahoma is a part of the Muscogee (Creek) Nation.

The federal government recognizes the second Monday in October as Columbus Day. In a proclamation Friday, President Donald Trump commemorated Christopher Columbus as the “great Italian who opened a new chapter in world history” and said racial activists have sought to undermine Columbus’ legacy.

The 15th-century Genoese explorer is a polarizing figure embraced by 20th-Century Italian-American immigrants. He’s often lauded for “discovering” the Americas but reviled for launching centuries of genocide against Indigenous people.

Arizona state Sen. Jamescita Peshlakai, who is Navajo, pushed for the proclamation that Gov. Doug Ducey signed last month. She said she plans to introduce legislation next year that would replace Columbus Day with a celebration of Native Americans. She expects backlash.

The movement has seen statues of Columbus and other others defaced or torn down in recent months.

Over the weekend, protesters in Oregon overturned statues of former Presidents Theodore Roosevelt and Abraham Lincoln in what they dubbed “Indigenous Peoples Day of Rage,” in response to the Columbus Day federal holiday.

In Santa Fe, Mayor Alan Webber had tried earlier this year to diffuse conflict over several historical markers linked to Spanish colonialism and Anglo-American soldiers. He had one statue of a Spanish conquistador taken down and boarded up an obelisk commemorating U.S. soldiers after city contractors tried and failed to tear down the massive stone structure.

Webber had promised to form a commission that would contemplate the future of the historical markers, but that hasn't happened.

“I think pulling it down was fabulous,” Judy Henry, 76, said of the obelisk in Santa Fe's historic plaza. She said demonstrators clashed with police briefly before officers left the area, ceding it to those who pulled down the monument.

Protesters knock down Roosevelt and Lincoln statues in Portland

A Native American leader from Arizona grew emotional Wednesday as he told a congressional committee about the pain members of his tribe feel about U.S. officials blasting through land they consider sacred to build part of President Donald Trump's wall along the U.S.-Mexico border.

Some US states marking their first Indigenous Peoples' Day

A handful of states are celebrating their first Indigenous Peoples' Day on Monday as part of a trend to move away from a day honoring Christopher Columbus.

The city of Phoenix became the largest city in the country to recognize Indigenous Peoples Day after the city council unanimously approves a resolution to establish that day.