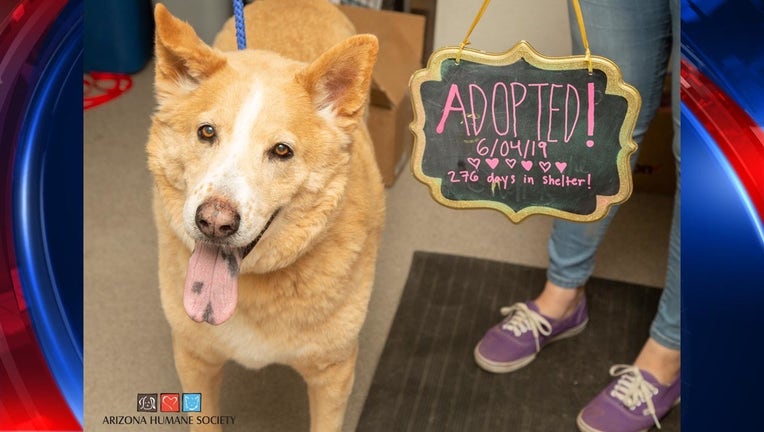 The Arizona Humane Society says the 12-year-old, 94-pound Australian Shepherd has finally been adopted after he was brought into the shelter on July 31, 2018.

AHS says Gus was found in Glendale and was treated for arthritis and dental issues, but no one came forward to claim him.

Although staff at the humane society fell in love with Gus, the feeling wasn't necessarily mutual.

"Gus is like one of those friends you sometimes have who are usually a bit cranky and sarcastic, but you see the good in them so you remain friends," said Bretta Nelson, Arizona Humane Society spokesperson. "He always made me laugh because I would go out of my way to enthusiastically greet him in his kennel and he would just look at me like I was crazy and then turn his head the other way."

AHS says Gus was actually adopted in November 2018 but was returned shortly after due to landlord issues.

Over the last 276 days, Gus warmed up to the staff and even became one of the tours stops at the humane society!

Finally, after a very long wait, Gus was adopted by his new mom, Danielle, in Phoenix. AHS says Danielle visited Gus six times before adopting him on June 4.