The president's medical team give a weekend update on his condition after he was diagnosed with COVID-19.

President Donald Trump’s blood oxygen level dropped suddenly twice in recent days, his doctors revealed Sunday as they continued to evade basic questions about his health during treatment for COVID-19. Still, they said he “continued to improve” and suggested he could be discharged as early as Monday.

Speaking on the steps of the military hospital where Trump spent a third day, his doctors again sidestepped questions, including the timing of his second dip in oxygen, which they neglected to mention in multiple statements the day before, or whether lung scans showed any damage.

It was the second straight day of obfuscation from a White House already suffering from a credibility crisis. And it raised serious questions about whether the doctors treating the president can be trusted to share accurate, timely information with the American public.

Pressed about conflicting information he and the White House released on Saturday, Navy Cmdr. Dr. Sean Conley acknowledged that he had tried to present a rosy description of the president's condition. 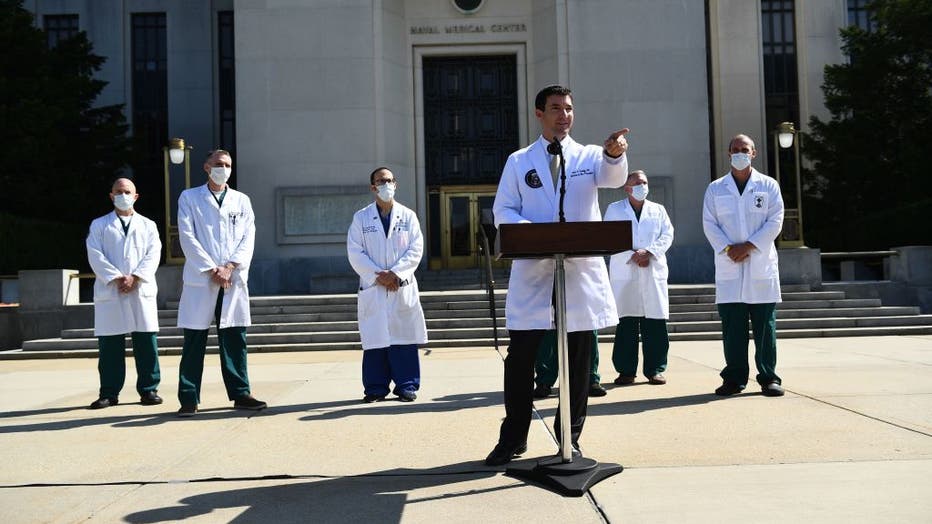 FILE - White House physician Sean Conley answers questions surrounded by other doctors, during an update on the condition of US President Donald Trump, on October 4, 2020, at Walter Reed Medical Center in Bethesda, Maryland. (BRENDAN SMIALOWSKI/AFP via Getty Images)

“I was trying to reflect the upbeat attitude of the team, that the president, that his course of illness has had. Didn’t want to give any information that might steer the course of illness in another direction," Conley said. “And in doing so, came off like we’re trying to hide something, which wasn’t necessarily true. The fact of the matter is that he’s doing really well.”

RELATED: Trump in new video: 'I wasn't feeling so well, I am feeling much better now'

Before walking away, Conley said the president had a “high fever” and a blood oxygen level below 94% on Friday and during “another episode” on Saturday. He was evasive about the timing (“It was over the course of the day, yeah, yesterday morning," he said) and when asked whether Trump's level had dropped below 90% ("We don’t have any recordings here on that.”) But he revealed that Trump was give a dose of the steroid dexamethasone in response.

Blood oxygen saturation is a key health marker for COVID-19 patients. A normal reading is between 95 and 100. A drop below 90 is concerning.

The doctors also declined to say what they had found in scans of the president's lungs.

“There’s some expected findings, but nothing of any major clinical concern,” Conley said. He declined to outline those “expected findings." The virus can cause pneumonia and other damage that may be visible in scans before a patient is feeling very sick.

Trump offered his own assessment of his status the night before in a video from his hospital suite, saying he was beginning to feel better and hoped to “be back soon.” He was back on social media early Sunday morning, sharing a video of flag-waving supporters, most not wearing masks, gathered outside Walter Reed National Military Medical Center.

RELATED: 'I'll be back soon': President Trump shares update on his condition to social media

Trump has been eager to return home and hates the image of himself at the hospital, according to people familiar with his mood. He has also been struggling to come to grips with the uncertainty of how long his illness will last and when he might be able to return to the campaign, with just weeks to go before the Nov. 3 election.

Trump's Democratic challenger, Joe Biden, pulled his attack ads off the air during Trump's hospitalization, and on Sunday, he dispatched senior aides to deliver a largely friendly message.

“We are sincerely hoping that the president makes a very quick recovery, and we can see him back out on the campaign trail very soon," Biden adviser Symone Sanders said on CNN's “State of the Union.”

She added, “This is a glaring reminder that the virus is real.”

Biden was at home in Wilmington, Delaware, on Sunday with no plans for in-person campaigning or other public appearances. Having already tested negative, he is expected to release the results of a new coronavirus test later in the day. His campaign has pledged to disclose those results and all other future test results for the 77-year-old candidate.

On Saturday, White House chief of staff Mark Meadows contradicted the rosy picture painted by Trump's doctors when he told reporters outside the hospital, “We’re still not on a clear path yet to a full recovery.” Conley moments earlier had refused to say whether the president had ever required supplemental oxygen, before it was reported he indeed had.

In an update Saturday night, Trump’s chief doctor expressed cautious optimism but added that the president was “not yet out of the woods.”

On Sunday, Conley's assessment was more positive, even while he acknowledged for the first time a second sudden drop in Trump's blood oxygen level on Saturday.

Another member of the president's medical team, Dr. Brian Garibaldi, said Trump on Sunday “has been up and around” and “feels well."

“Our plan for today is to have him eat and drink, to be up out of bed as much as possible, to be mobile,” Garibaldi said. “And if he continues to look and feel as well as he does today, our hope is that we can plan for a discharge as early as tomorrow to the White House where he can continue his treatment course.”

More than 209,000 Americans have been killed by the virus, by far the highest number of confirmed fatalities in the word. In all, nearly 7.4 million people have been infected in the United States, and few have access to the kind of around-the-clock attention and experimental treatments as Trump.

Trump's treatment with the steroid dexamethasone is in addition to the single dose he was given Friday of an experimental drug from Regeneron Pharmaceuticals Inc. that supplies antibodies to help the immune system fight the virus. Trump on Friday also began a five-day course of remdesivir, a Gilead Sciences drug currently used for moderately and severely ill patients. The drugs work in different ways — the antibodies help the immune system rid the body of virus, and remdesivir curbs the virus’ ability to multiply.

Garibaldi, a specialist in pulmonary critical care, said the president was not showing any side effects of the drugs “that we can tell.”

The National Institutes of Health COVID-19 treatment guidelines recommend against using dexamethasone in patients who do not require oxygen. It has only been proven to help in more serious cases. Among the concerns with earlier use is that steroids tamp down certain immune cells, hindering the body’s own ability to fight off infection.

Trump is 74 years old and clinically obese, putting him at higher risk of serious complications.

RELATED: Stock futures plunge after Trump confirms he has coronavirus

First lady Melania Trump has remained at the White House as she recovers from her own bout with the virus.

Trump's administration has been less than transparent with the public throughout the pandemic about the president’s health and the spread of the virus inside the White House. Several White House officials this weekend expressed frustration with the way things have been handled.

They were particularly upset by the whiplash between Conley’s rosy assessment Saturday and Meadows’ more concerned outlook. They privately acknowledge that the administration has little credibility on COVID-19 and that they have unnecessarily squandered what remains of it with the lack of clear, accurate updates on Trump’s condition.

Most of that frustration appears to be directed at Trump himself, with aides believing that he has restricted what Conley can say or that Conley has tried to appease the president by presenting an optimistic outlook. They also blame Meadows for not establishing clear lines of communication and for making the situation worse Saturday.

Many in the White House are also shaken and scared — nervous that they have been exposed to the virus and confronting the reality that what seemed like a bubble of safety has become a COVID-19 hot spot. There has been no mass directive sent to staff on how they should respond.