U.S. House hearing from federal officials including the FBI Director on how and when the January 6 Capitol attack happened.

WASHINGTON - Another person linked to the far-right Oath Keepers group has pleaded guilty to charges stemming from the Capitol riot that took place on Jan. 6, according to a Department of Justice news release.

Caleb Berry, 20, of Tampa, Florida, pleaded guilty on Tuesday "to conspiracy and to breaching the U.S. Capitol for the purpose of obstructing Congress’ certification of the electoral college on Jan. 6," the DOJ said.

Court documents showed Berry traveled from Florida to Washington, D.C. between Jan. 4-5 with several of his "co-conspirators, who were members of the Oath Keepers," the DOJ continued.

Berry admitted that he and his fellow Oath Keepers discussed bringing firearms prior to attending the event on Jan. 6, according to the DOJ. 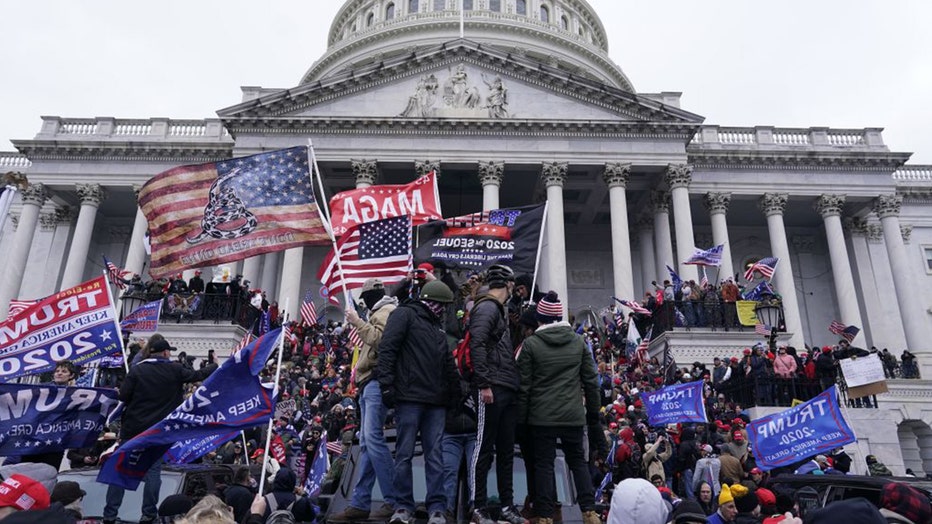 On Jan. 6, Berry wore a T-shirt and hat that read "Oath Keepers" as he met with his co-conspirators near the White House and the group made their way to the Capitol building and entered restricted areas at 2:28 p.m.

"According to the court papers, they joined on the east side of the Capitol in a stack formation, with each co-conspirator keeping a hand on the shoulder of the person in front," the DOJ said.

Berry and some of the people he met with earlier were able to get inside the building and Berry admitted that he did this in order to "stop Congress’ certification of the electoral college vote by intimidating and coercing government personnel participating in the Congressional proceeding," the DOJ news release said.

He also admitted to deleting data on his phone and any encrypted communications he had with his alleged co-conspirators the day after the Capitol riot, according to the DOJ.

Berry could face up to five years in prison for the conspiracy charge and up to 20 years for the obstruction charge. He could also have several years of supervision following his release, the DOJ said.

Berry is set to have a status hearing in September.

Following the deadly riot on Jan. 6, 535 people have been arrested for their alleged participation to stop the certification of President Joe Biden’s Electoral College win. To date, 165 people have been charged with assault, resisting or impeding law enforcement, according to the department.

Berry is the fourth member of the Oath Keepers to plead guilty to charges stemming from the Capitol riot that left seven people dead during and after the incident.

"[Oath Keepers] is one of the largest radical antigovernment groups in the U.S. today. While it claims only to be defending the Constitution, the entire organization is based on a set of baseless conspiracy theories about the federal government working to destroy the liberties of Americans," according to the Southern Poverty Law Center.

The other three members of the Oath Keepers include Graydon Young, 55, of Englewood, Florida, Jon Schaffer, 53, of Columbus, Indiana, and Mark Grods, 54, of Mobile, Alabama.

Schaffer was the first Oath Keeper member who pleaded guilty on April 16, but was not charged in the conspiracy case. Schaffer has agreed to cooperate with investigators and potentially testify against other defendants.

Young, who was accused alongside 15 other members and associates of the Oath Keepers of conspiring to block the congressional certification of Biden’s presidential victory, pleaded guilty to two counts: conspiracy and obstruction of an official proceeding on June 23. It was the first guilty plea in the major conspiracy case brought against members of the group.

Grods was the second member of the far-right group to admit to participating in the conspiracy to block Biden’s certification on June 30 and also agreed to cooperate in the department’s investigation.