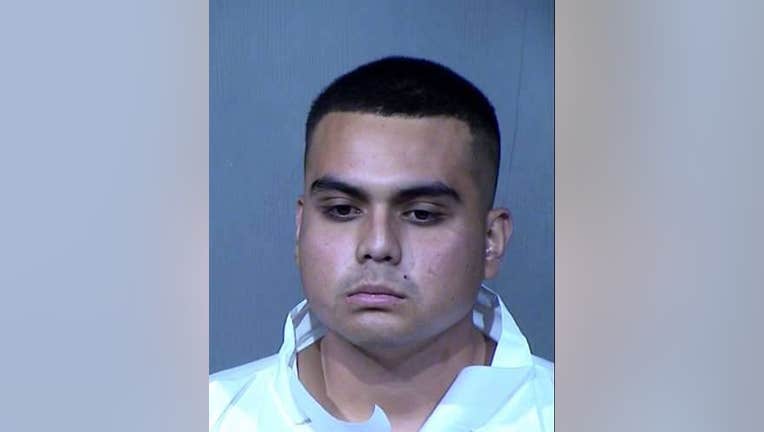 GLENDALE, Ariz. (AP) — A grand jury has indicted a construction worker on 39 charges in a shooting rampage at a suburban Phoenix restaurant and retail complex that wounded three people.

Armando Hernandez Jr. was indicted on two counts of attempted first-degree murder, 10 counts of aggravated assault, 15 counts of disorderly conduct, four counts of endangerment, two counts of firing a gun at a structure, five counts of criminal damage and one count of unlawful firing of a weapon.

He's accused of shooting three people at the Westgate Entertainment District on the night of May 20 and remains jailed on a $1 million bond.

One of the victims — a 19-year-old man — remains hospitalized in critical condition. A 16-year-old girl and 30-year-woman suffered non-life threatening injuries.

Hernandez, 20, allegedly wanted to target people in his own age group in retaliation for being bullied, according to authorities.

He reportedly walked through the entertainment district, returned to his car to make a social media video and loaded three rifle magazines. Glendale police said Hernandez filmed the attack while holding a cellphone with his left hand and blasting away with the rifle in his right hand.

He later surrendered, telling detectives that he intended to harm 10 people, although it’s unclear why he chose that number.

Authorities said they believe Hernandez intended to use the 90 rounds of ammunition that he brought to the attack, but he was thwarted when his weapon jammed.

Jamie Jackson, an attorney representing Hernandez, declined to comment on the indictment.

Two heroes who saved lives in the shooting at the Westgate Entertainment District on May 20 were recognized for their heroic efforts on Thursday.

We are hearing the 9-1-1 calls from the Westgate Entertainment District shooting last week on May 20th. The suspect remains in custody and has a $1M bond.

Scott Weinberg announced he is dropping his campaign for Kyrene School District Governing Board, which covers schools in several Phoenix suburbs.

The mother of one of the Westgate Entertainment District's shooting victims speaks publicly for the first time Saturday, just days after a man targeted people with an assault rifle on May 20th because police say he wanted respect.

Prosecutors painted a dark picture of the man authorities believe was the suspect in a shooting that left three people injured at Westgate Wednesday night. FOX 10's Nicole Garcia reports.

According to Glendale Police officials, calls came in at around 7:25 p.m. of an active shooting situation at Westgate. The shooting, according to officials, left three people injured, one critically.