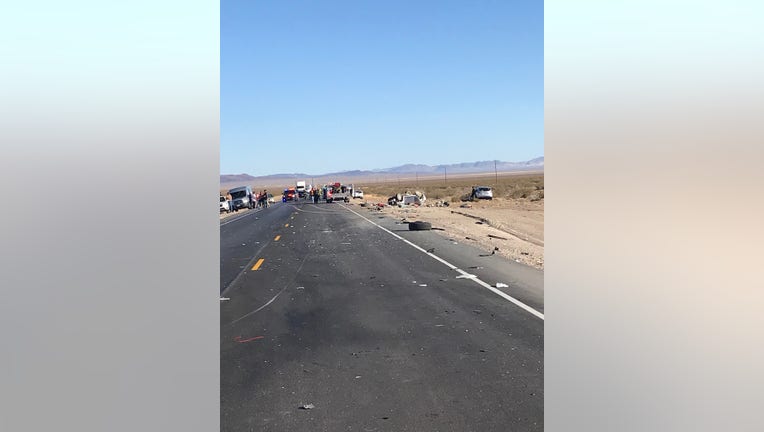 Scene of the fatal crash on the US 95. (Nye County Sheriff's Office)

LAS VEGAS (AP) - An Arizona man will face multiple felony driving under the influence and drug charges in a head-on crash on a Nevada highway that killed three members of an Idaho family and left two children injured, authorities said April 7.

The Nevada Highway Patrol said Tyler Kennedy, 32, of Tolleson, Arizona, was being held at the Nye County Jail in Pahrump pending a court appearance on charges also including reckless driving resulting in death or serious injury.

Records did not reflect if Kennedy had a lawyer who could speak on his behalf.

The crash occurred March 27 when Kennedy, driving a 1998 Ford F-150 pickup traveling north, crossed the center line on a stretch of U.S. 95 near Scotty’s Junction and slammed into a 2011 Toyota Highlander headed south, the highway patrol said.

Five people from Victor, Idaho, were in the Toyota SUV. It went off the road and overturned.

Killed were the driver, Michael Durmeier, 39; his fiance, Lauren Starcevich, 38; and his daughter, Georgia Durmeier, 12.

A 10-year-old boy in the Toyota remained in critical condition Wednesday at University Medical Center in Las Vegas, highway patrol Trooper Travis Smaka said. A 6-year-old girl was reported to be in stable condition.