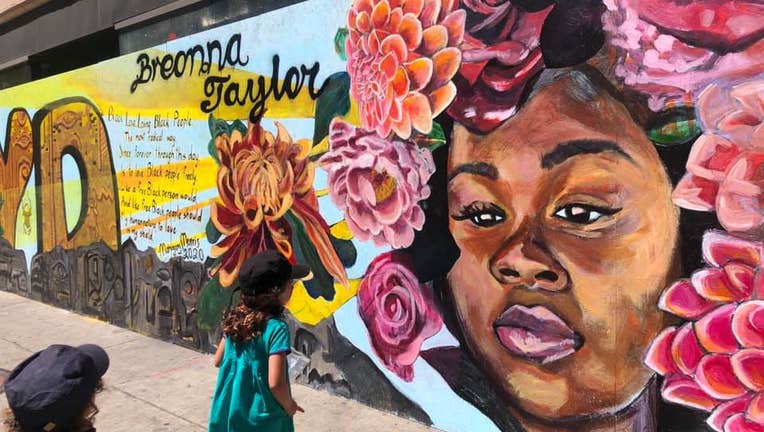 A young girl looks at a Breonna Taylor mural in San Francisco. Her mother is offering outdoor lessons in lieu of distance learning. (Dona H-w)

OAKLAND, Calif. - Some families are setting up “wilderness pods” in San Francisco and are hoping to find other children to join them in learning outside. A family in Marin County moved to their second home in Hawaii so their children could go to school in person there. Other families are looking to hire graduate students at $60 an hour to tutor their kids in their backyards.

And then, there are families in Oakland who can't even afford WiFi. They're scrambling to be ready for the coming school year, too.

A week after California Gov. Gavin Newsom mandated that most schools in the state must begin online, these are just some of the diametrically opposed scenarios playing out weeks before school begins during the height of the coronavirus pandemic. They highlight the widening gap between the haves and have-nots, making the phrase “we are all in this together” ring hollow for those who are on the bottom.

“It is indeed a reality that this situation will increase the opportunity gap,” said Alex Mozes, a senior director at an educational non-profit and a parent trying to create what is now referred to as a “pandemic pod.” “It’s an unfair truth.”

He is in the process of establishing a network of up to five other kindergartners so that his 5-year-old daughter, Ellie, won’t have to start kindergarten on computer. He has an in-law unit in the back of his Berkeley home that could be turned into a makeshift schoolhouse. He and his friends are willing to spend up to $1,000 a month each, if not more, to hire a tutor to teach their children in the in-law unit. They will all still enroll their children in Berkeley public schools so that the district won't lose out on crucial funding.

“We are lucky enough to have the means and the space to host the school,” he said.

He is also quite aware of the inequities being created, as many others don't have the same luxury of a backyard school with face-to-face instruction from a teacher.

“As a liberal white male, I’m having a visceral reaction to this,” he said. “I realize the great privilege that I’ve been afforded.”

But that said, he added: “My first priority is to my daughter. That is my fundamental role as her father.”

“I realized the great privilege that I’ve been afforded. But my first priority is to my daughter. That is my fundamental role as her father.”

— Alex Mozes of Berkeley, who is created a pandemic pod for his 5-year-old

A world away with no WiFi

One city - but an entire world - away, Irvin Peralta’s father hasn’t been able to make his Comcast payments.

And because he owes about $500, Irvin, a 15-year-old student at Sojourner Truth Independent Study school in Oakland, has no WiFi at home.

“We owed money, so my dad had to cancel it,” Irvin said.

When school abruptly ended in March because of the pandemic, Irvin said he used his $40-a-month mobile phone plan to turn homework in using his thumbs on his phone. And when there were Zoom classes, he couldn’t log on or participate with video, even though he was able to get a free Chromebook loaned to him by the Oakland Unified School District.

“I couldn’t really do much,” he said. “I just told my teachers I couldn’t be there. That’s just the way it is.”

He’s been working with his father every day this summer, from 6 a.m. to 8 p.m. delivering furniture. He’s hoping the money he makes from tips will be enough to pay for internet access when school starts.

Irvin has no hard feelings about his situation and is not angry that there are those who can afford a second home or to hire a private tutor.

“Life is different for everyone,” he said. 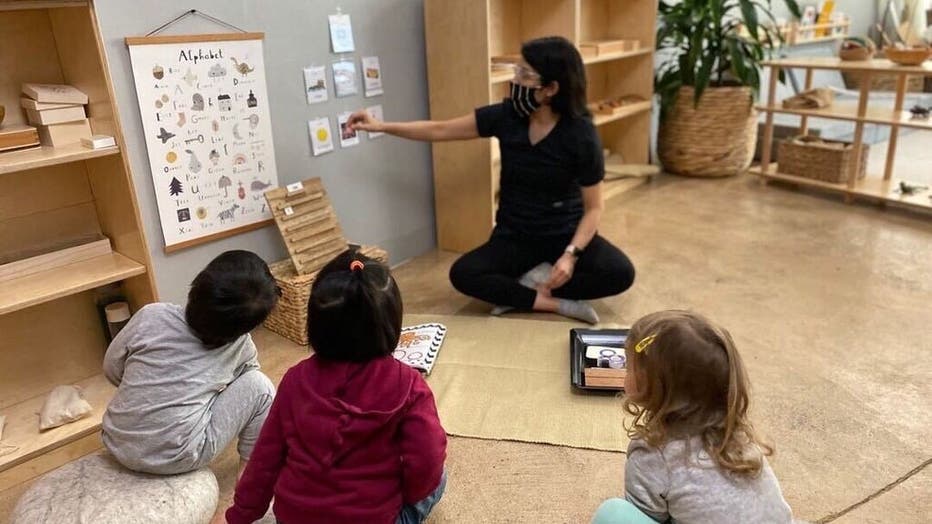 A teacher at Tinycare in San Francisco teaches in a small pod. Founder Michael Lai says "equity has to be baked into" any type of pods that are created.

Pandemic has widened the gap

The disparity in education was known and documented well before coronavirus struck. But the pandemic has definitely exposed a widening gap.

The great irony, some note, is that these inequities are coming at a time when the country is embroiled in a national conversation about eradicating systemic injustices and empowering the Black Lives Matter movement.

“This is definitely going to be worse for students of color,” said Elisha Arriaga Smith, executive director of Education Trust West, a nonprofit in Oakland that advocates for the high achievement for all students, especially those living in poverty.

But she also noted, no one is at fault for trying to provide for their kids.

“All parents want what’s best for their children, regardless of income," she said.

And while the situation might seem dire or unfair to those who are at a financial disadvantage, Arriaga Smith said she felt optimistic about this historic moment.

One way to get it right, many say, is to figure out how to make internet access available to those who can’t afford it. There is a smattering of bills that California legislators are looking at to make this at least partially possible, though Arriga Smith notes that “none are moving fast enough.”

The Brookings Institute has offered several suggestions on making this possible, including having the government fund a broadband buildout for everyone, and supporting state and local municipalities that want to pitch in and pay to connect their residents.

Dane Jasper, CEO of Sonic.net, a telecommunications company and internet service provider in Santa Rosa, supports the idea of government aiding those in need with some sort of subsidy or voucher program.

“Grocery stores can’t afford giving away their food for free, but we recognize hunger is an issue,” he said. “So, we have a food stamp program.”

Until that happens, some families, like the Mozes,’ are contemplating donating money or creating a scholarship fund so that low-income families can create their own pandemic pods in their neighborhoods.

The YMCA has partnered with the San Francisco Unified School District to provide academic, in-person enrichment for students of various incomes.

And while he and others like him are grappling with the fairness of it all, Mozes does believe that those with more should look to help those with less - and not berate themselves for wanting to provide the best futures for their kids.

“I don’t think we should bring people down,” Mozes said. “But bring everyone up.”

IF YOU'RE INTERESTED: These organizations are trying to bridge the digital divide and provide resources to students who are low-income.