WASHINGTON - In a sharp rebuke to Trump-era policies, Secretary of State Antony Blinken on Tuesday formally scrapped a blueprint championed by his predecessor to limit U.S. promotion of human rights abroad to causes favored by conservatives like religious freedom and property matters while dismissing reproductive and LGBTQ rights.

Blinken said a report prepared for former Secretary of State Mike Pompeo that sought to pare down the number of freedoms prioritized in U.S. foreign policy was "unbalanced," did not reflect Biden administration policies and would not guide them. The report from Pompeo’s Commission on Unalienable Rights had been harshly criticized by human rights groups.

"One of the core principles of human rights is that they are universal. All people are entitled to these rights, no matter where they’re born, what they believe, whom they love, or any other characteristic," Blinken said. "Human rights are also co-equal; there is no hierarchy that makes some rights more important than others."

"Past unbalanced statements that suggest such a hierarchy, including those offered by a recently disbanded State Department advisory committee, do not represent a guiding document for this administration," he said. "At my confirmation hearing, I promised that the Biden-Harris Administration would repudiate those unbalanced views. We do so decisively today." 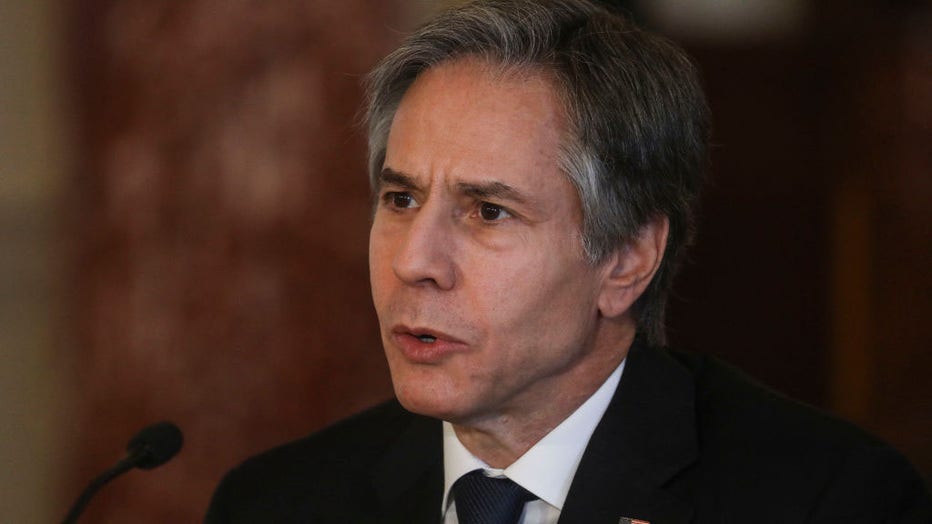 FILE - U.S. Secretary of State Antony Blinken speaks during a virtual meeting with UN Secretary-General Antonio Guterres via videoconference from the State Department in Washington, DC on March 29, 2021. (Photo by LEAH MILLIS/POOL/AFP via Getty Image

Blinken made the announcement repudiating the commission’s report as he rolled out the annual human rights reports. The reports, covering last year, highlighted a declining trend in human rights around the world and the impact that the coronavirus pandemic had on rights practices. It noted that some governments had "used the crisis as a pretext to restrict rights and consolidate authoritarian rule."

Human rights advocates condemned the report from Pompeo’s Commission on Unalienable Rights when he unveiled it last year to great fanfare from religious and social conservatives. The report was part of a broader Trump administration effort to restore the primacy of what officials considered the values of America's Founding Fathers.

Pompeo had promoted the report at events from Pennsylvania to Indonesia and in numerous interviews with conservative media in the hope it would serve as a guide for future administrations.

Nearly all references to the commission’s report and Pompeo’s advocacy of it have been removed from the State Department’s website, although they remain available on archived pages.

Pompeo and many conservatives have long decried the expansion of the definition of "human rights" to include matters they believe are not God-given or made specifically sacrosanct in the U.S. Constitution.

The "international human rights project is in crisis," Pompeo said when he unveiled the commission's report at an event in Philadelphia. He lamented that "too many human rights advocacy groups have traded proud principles for partisan politics" and that "even many well-intentioned people assert new and novels rights that often conflict."

Human rights groups lashed out at the findings of the commission, which was chaired by a mentor of Pompeo's, conservative scholar and former U.S. ambassador to the Vatican, Mary Ann Glendon, who has questioned the legitimacy of rights including same-sex marriage.

A two-week public comment period after the draft report was released in July 2020 was punctuated by angry denouncements of a pullback in the U.S. commitment to human rights, but the commission chose to make only minor revisions in response.

In presenting the annual human rights reports, which cover only 2020 and were largely prepared prior to President Joe Biden's inauguration under Trump administration guidelines, Blinken said he had instructed the State Department to restore sections on reproductive rights to future editions.

He ordered the department to prepare addendums to the 2020 reports that include information about maternal mortality, discrimination against women in accessing sexual and reproductive health care and government policies about access to contraception and skilled health care during pregnancy and childbirth.

The reports highlighted concerns about abuses in China, Iran, Russia, Myanmar, Belarus and other authoritarian nations.

They called out China for committing what both the Trump and Biden administrations have characterized as "genocide" against Uighur Muslims and other minorities in China's western Xinjiang region. They identified continued atrocities committed against Syrians by President Bashar Assad's government and the devastating impact that the war in Yemen has had on human rights.

The reports also noted actions by the Russian government against political dissidents, like opposition figure Alexei Navalny, and peaceful protestors, continuing corruption by Venezuelan leader Nicolas Maduro and his top aides, and restrictions imposed on political speech by governments in Cuba, Nicaragua, Turkmenistan and Zimbabwe.

RELATED: US and China spar in 1st face-to-face meeting under Biden administration