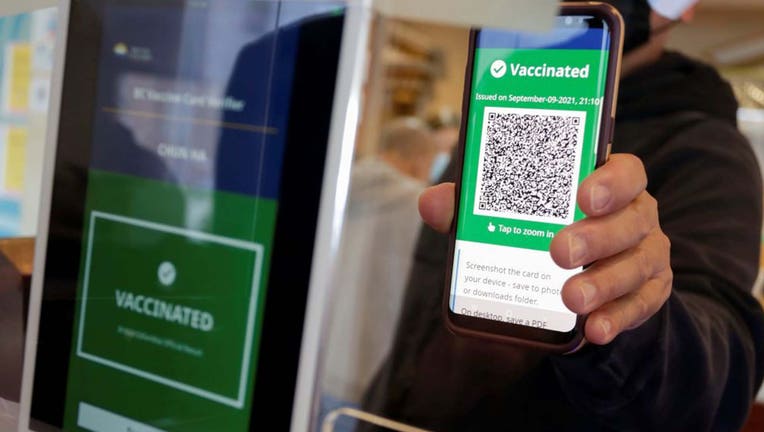 FILE - A man scans his COVID-19 vaccination QR code at a restaurant in Vancouver, British Columbia, Canada, on Sept. 13, 2021.

A restaurant in Canada was asked to temporarily suspend indoor dining after it was discovered that the establishment was accepting pictures of patrons’ dogs in lieu of proof of a negative COVID-19 test or COVID-19 vaccine, according to multiple reports.

"An investigation was conducted on January 11th, 2022 and the complaints were validated by two test shoppers as they were both able to enter and dine-in at the above noted establishment after presenting a photograph of a dog (as a substitute for proof of vaccination/QR code) and personal identification to staff. The test shoppers entered the premises at separate times. In both instances, facility staff used a tablet to make it appear as if they were scanning a QR code when in fact the staff member was presented with a photograph of a dog. The staff member then proceeded to ask the test shopper for personal identification and offered dine in services," according to a letter sent to the owners from Alberta Health Services.

The restaurant owners were ordered to "immediately close the indoor dining area of the premises to the public" and submit "a written plan and commitment to implement a restrictions exemption program in full compliance" with the health department’s guidance on COVID-19.

The owners were also ordered to provide training for staff on COVID-19 guidance and show proof of the training, the letter continued.

Alberta Health Services executive officer ordered that the owners must "attend an administrative hearing with Environmental Public Health and demonstrate that the above work, as described in section a, b and c, has been completed to the satisfaction of an Executive Officer of Alberta Health Services," according to the letter.

The restaurant had shut down for a weekend according to a Jan. 14 Facebook post, which is the same day the letter from the health department was issued.

"To our valued guests, we had an unfortunate circumstance at our front door which involved one of our underage hostesses, and the requirements for the REP program," the post said, referring to Alberta's Restrictions Exemption Program (REP).

The program allows participating businesses to operate with fewer COVID-19 restrictions as long as they require proof of vaccination or negative test results from patrons aged 12 and older is required before entry.

"We are taking the weekend to retrain and regroup," the post continued. "We look forward to serving you again as soon as we are ready to reopen."

The restaurant offered free coffee for to-go orders during the weekend closure and reopened on Tuesday, according to local news media.

Beginning on Dec. 24, 2021, Alberta implemented the following restrictions for restaurants that have enrolled in REP.

For restaurants that have not enrolled in REP, no indoor dining is permitted and outdoor dining is only allowed with a maximum of six people per table.

In addition, liquor service must end at 10 p.m. and drinking must stop by 11 p.m., according to Alberta’s public health website.