The nominees, announced on Instagram Live, differed notably from the Golden Globe nominations announced the day before. While the Hollywood Foreign Press Association spurned films with largely non-white casts in its tops awards, the actors guild nominated a strikingly more diverse slate of nominees for its top award, best ensemble.

All of those films, except Sorkin's, were overlooked Wednesday by the Globes in its top award, best dramatic film. "Minari," set in Arkansas but with largely Korean dialogue, was even ruled ineligible for the category by the Hollywood Foreign Press Association.

But the SAG Awards, presented by SAG-AFTRA, are considered a far better barometer for the Academy Awards, where actors account for the largest percentage of the academy. Usually, the eventual Oscar best picture winner is first nominated for best ensemble by the SAG Awards, though "Green Book" and "The Shape of Water" were two recent exceptions. Last year, Bong Joon Ho's "Parasite" won the SAG's top honor (and became the first non-English film to do so) before triumphing at the Oscars.

The Screen Actors Guild's field of ensemble nominees left out a pair of frontrunners in David Fincher’s golden-age Hollywood drama "Mank" (which led the Globes with six nominations) and Chloe Zhao’s Western road movie "Nomadland." The stars of each — Gary Oldman in "Mank," Frances McDormand in "Nomadland" — were both nominated by the actors guild.

Boseman, who died last August at age 43, was nominated not just for his lead performance in "Ma Rainey's Black Bottom," but also his supporting role in "Da 5 Bloods." With two individual nominations and two ensemble nods, Boseman's four SAG nominations in a single year tie a record — and set a new one for solely film categories.

In 2019, he memorably a ccepted the SAG ensemble award for "Black Panther." "We all know what it’s like to be told that there is not a place for you to be featured — yet you are young, gifted and Black," Boseman said then.

Aside from Boseman and Oldman, the nominees for best male actor in a lead role were Riz Ahmed ("Sound of Metal"), Anthony Hopkins ("The Father") and Steven Yeun ("Minari").

The other supporting nominees for male actors were Daniel Kaluuya ("Judas and the Black Messiah"), Sacha Baron Cohen ("The Trial of the Chicago 7"), Jared Leto ("The Little Things") and Leslie Odom Jr. ("One Night in Miami").

In an already recurring theme for a movie year in which many theaters were often closed due to the pandemic, Netflix led all studios. It accounted for 30 nominees in all, about triple the closest competitor.

In the television categories, "The Crown," "Schitt’s Creek" and "Ozark" dominated. All of the female leads in a drama series nominees came from either "The Crown" (Gillian Anderson, Colman, Emma Corrin) or "Ozark" (Laura Linney, Julia Garner).

Both series were nominated for best TV drama ensemble, along with "Better Call Saul," "Bridgerton" and "Lovecraft Country." 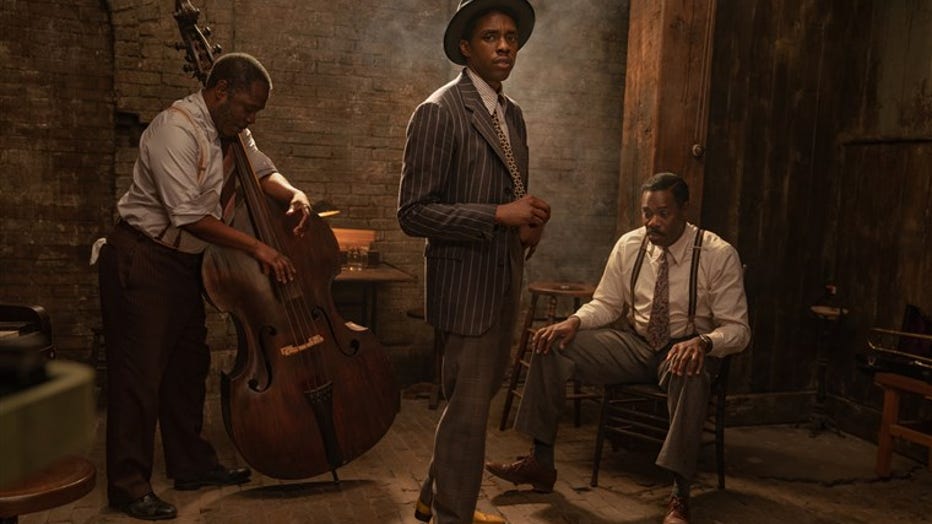 Annie Murphy, Catherine O’Hara, Eugene Levy and Daniel Levy were all nominated for "Schitt’s Creek." The other nominees for best comedy series ensemble were "Dead to Me," "The Flight Attendant," "The Great" and "Ted Lasso."

The actors guild also helped atone for one of the Globes’ other glaring oversights, nominating Michaela Coel for her performance in the limited series "I May Destroy You."

The SAG Awards will be held almost three months later this year, on April 4. After postponing due to the pandemic to March 14, the SAGs again moved when the Grammy Awards also took that date. The Oscars won't be held until April 28. Academy Award nominees, to be announced March 15, are still more than five weeks away.

In a first, the nominations Thursday were streamed on Instagram, with Daveed Diggs and Lily Collins serving as hosts. At first, Diggs had trouble joining his screen with Collins.

"There are so many more comments than I thought there would be," he said.

It also meant Diggs was live when Collins announced his nomination for best male actor in a television movie or limited series, for the film version of "Hamilton." He responded that the awards were "clearly rigged."