Study: High school athletes who have a history of concussion have elevated risk of suicide

Students who reported having a concussion within the last year were more likely to report feelings of depression, suicidal ideations and planned or previous suicide attempts.

HOUSTON - High school athletes who have a record of sport-related concussions might have an increased risk of suicide, according to a study out of the University of Texas School of Public Health.

According to a 2018 report from the U.S. Centers for Disease Control and Prevention, suicide rates increased in nearly every state from 1999 to 2016, and suicide is the third-leading cause of death among adolescents.

In previous studies, concussions have been shown to be a risk factor for suicide in adults, but there have be no large-scale studies conducted to determine if the same link exists between concussion and elevated risk of suicide among youth.

“Concussions are a traumatic brain injury and they are even worse for young people with developing brains,” said Steven H. Kelder, PhD, MPH, senior author and professor at UTHealth School of Public Health in Austin. “These injuries can have long-term effects such as memory issues and sleep disturbances.”

To explore the potential link between sport-related concussion and suicide risk in youth athletes, researchers pulled data from the 2017 Youth Risk Behavior Surveillance Survey on approximately 13,000 high school students in the U.S. Study participants were asked if they had suffered a sports-related or physical activity-related concussion within the last year.

Additionally, they were asked a series of questions which were designed to measure potential suicidal behaviors.

Of the total participants, approximately 15 percent reported having had a concussion as a result of sports of other physical activity.

Researchers found that the students who reported having a concussion within the last year were more likely to report feelings of depression, suicidal ideations and planned or previous suicide attempts. 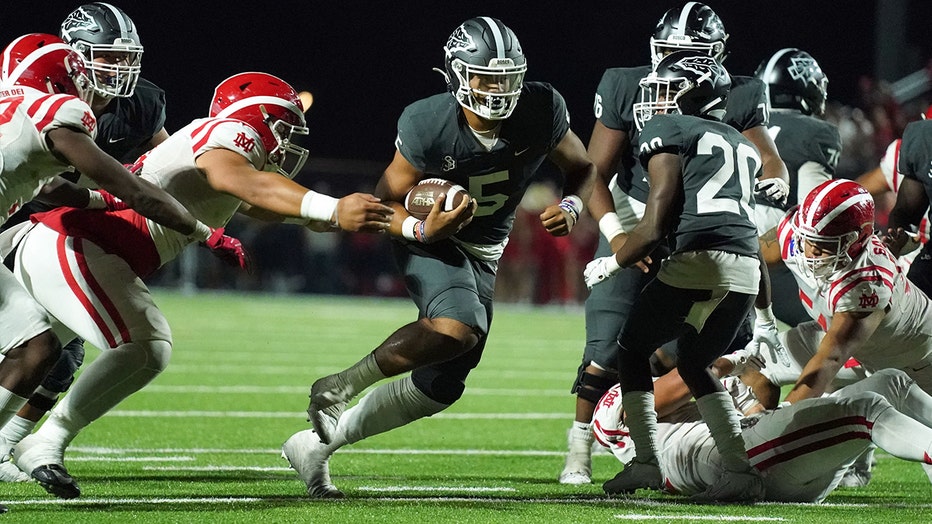 Players from St. John Bosco High School square off against the team from Mater Dei High School. High school football players are particularly prone to concussion, and a new study found that history of concussion may increase risk of suicide in studen (Scott Varley/MediaNews Group/Torrance Daily Breeze via Getty Images)

In a study recently published in the journal Pediatrics that analyzed concussion trends in 20 high school sports, female concussion rates were significantly higher than their male peers.

“It’s important to remember that when it comes to concussions, there’s no visual test to confirm them. Unfortunately, you can’t take your child to have a lab test done to diagnose one,” said Dale Mantey, the study’ lead author, a doctoral student at UTHealth School of Public Health in Austin.

“Everyone needs to be aware of the warning signs and the risks that come with concussions – parents, teachers, coaches, but also the students themselves,” Mantey said. “If there is any concern that a child may have suffered a concussion, it is critical to seek medical attention. If a child is diagnosed with a concussion, everyone in their support network should look for changes in mood or behavior that may be warning signs of reduced mental well-being.”