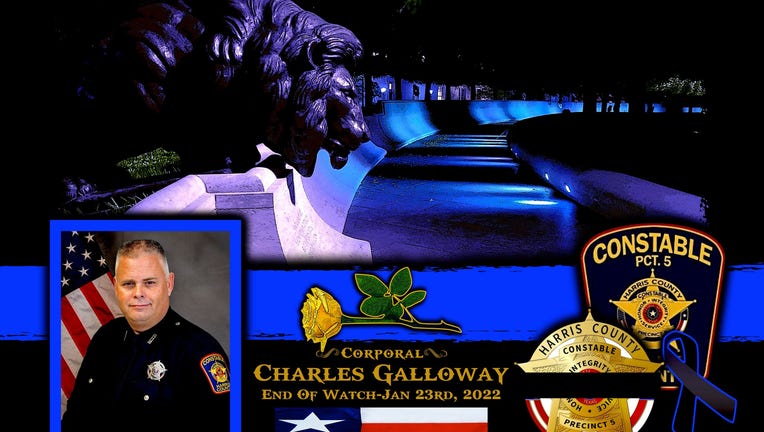 HOUSTON - Funeral services were announced Wednesday for Corporal Charles Galloway, the constable deputy with Harris County Pct. 5 who was killed during a traffic stop this past Sunday.

Anyone can attend the funeral, and the doors will open at 9 a.m. but services will begin at 10 a.m.

Corporal Galloway, 47, was shot and killed on Sunday morning in southwest Houston while attempting to conduct a traffic stop. The deadly shooting occurred around 12:45 a.m. in the 9100 block of Beechnut.

RELATED: $100K bond for 2 accused of tampering with evidence in connection to shooting of Pct. 5 corporal

According to the constable’s office, the driver exited the vehicle and fired repeatedly at Corporal Galloway’s patrol car. He was hit several times and died at the scene.

Corporal Galloway joined Pct. 5 in 2009. He most recently served in the Toll Road Division, where he served as a Field Training Officer.

Corporal Charles Galloway: Who was he and how he will be remembered

FOX 26’s team coverage continues on Corporal Charles Galloway with Harris County Constable Pct. 5, who was shot and killed in the line of duty during a traffic stop in southwest Houston.

A massive search for his killer ensued and during a news conference on Monday, Houston police identified Oscar Rosales as the shooter.

On Wednesday, Rosales was arrested in Mexico. We're told the U.S. Marshals Gulf Coast Violent Offenders and Fugitive Task Force, in conjunction with Mexican authorities, arrested Rosales without incident in Ciudad Acuña, which is located on the border with Del Rio, Texas.

Houston police say they are working with law enforcement partners to begin the process of returning Rosales to Harris County. Rosales, 51, is facing a capital murder charge.