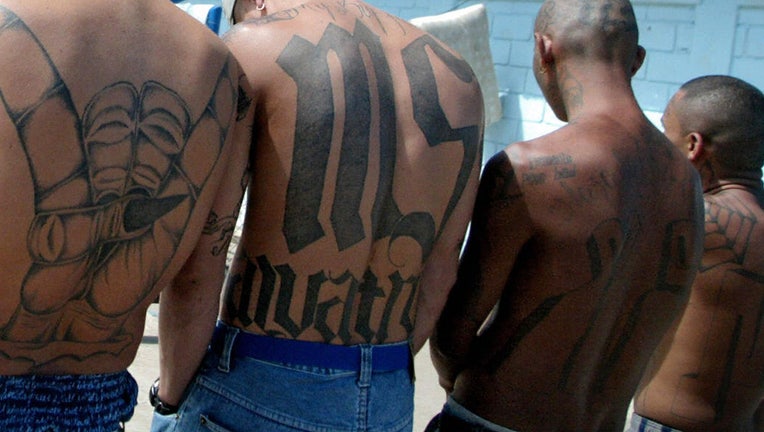 Four unidentified members of the Mara Salvatrucha "MS-13" show their tattoos in the unit where they are kept imprisoned in the National Penitentiary in Tamara. (Elmer Martinez/AFP via Getty Images)

The leader of MS-13 has been charged with terrorism amid a nationwide crackdown on the group, federal prosecutors announced Wednesday.

The indictment, unsealed in Virginia against Melgar Diaz, marked the first time the Justice Department has brought terrorism charges against a member of MS-13.

Attorney General William Barr described Diaz as "the person who would green-light assassinations" for the gang in the United States.

Prosecutors are also seeking the death penalty against Alexi Saenz, another MS-13 leader in Long Island, N.Y. charged in seven killings, including those of two high school students slain with a machete and a baseball bat.

"We believe the monsters who murder children should be put to death," Trump told reporters at the White House, adding that his administration would not rest before bringing every member of the gang to justice.

The announcement came a day after grand juries in New York City and Nevada handed up new charges against nearly two dozen MS-13 members, ranging from drug dealing and kidnapping to murder and racketeering.

The cases were related to Joint Task Force Vulcan (JTFV), an initiative launched in August 2019 aimed “disrupting, dismantling, and ultimately, destroying MS-13,” according to a press release from the U.S. Department of Justice.

“Joint Task Force Vulcan’s operations have significantly degraded MS-13 capabilities. While there is still work to be done, the Department of Justice remains committed to protecting Americans threatened by MS-13, and we will not rest until we have successfully defeated this transnational criminal organization,” Barr said in a statement.

MS-13 is believed to have been founded by immigrants in Los Angeles who had fled war in El Salvador in the 1980s. It is considered one of the top transnational organized crime threats in the United States. Barr has likened the group to a “death cult.”

"It's about the honor of being the most savage, bloodthirsty person you can be and building up a reputation as a killer," Barr said.

The gang recruits young teenagers from El Salvador and Honduras, though many gang members were born in the U.S.

Trump, who visited Long Island in 2017 to address the gang problem, has blamed the violence and gang growth on lax immigration policies. The president said Wednesday that U.S. Immigration and Customs has arrested more than 2,000 MS-13 members over the past few years.

Days after President Donald Trump was criticized for using the word "animals" to refer to some immigrants who illegally cross the U.S. border, the White House released an informational statement with the title "What you need to know about the violent animals of MS-13"